Diary kept by John Coyle (circa 1839-1928), a Methodist minister of Hackettstown, NJ, while in the service of the U.S. Christian Commission performing mission work in Alexandria and on the front lines of the Civil War at Petersburg. Upon arrival in Alexandria he tours the city, writing, "As to the buildings there exists the same difference as between the classes of society. The major part of the inhabitants are negroes. The first thing which strikes the stranger is the perfect freedom which the negroes seem to enjoy, so new and strange to them."
Coyle was tasked with ministering to the needs of soldiers in the hospitals and prisons in the area--mostly writing letters, preaching the Word, and filling orders for necessary goods for the men. His first day was a shock: "I entered the first hospital with diffidence not knowing what my labor was to be. The first room I entered I found a man with leg amputated, but very patient. He professed to love Christ. . . . Thus I walked from room to room witnessing scenes of misery, sickness and suffering such as I have never seen before. But oh! How patient they bear it--not a murmur not a word of regret that they had been called upon to pay such a fearful price for their country's cause." He notes what he considers to be odd behavior on the part of Alexandria's ladies: "There is one strange fact which the Northerner notices when he arrives here. That is the scarcity of white females in the street during the day in contrast with the numbers out at the doors and windows and on the sidewalk during the eve, and nearly all without covering on their heads. Clearly all secesish."
Coyle is quite taken with an African-American preacher he meets in Alexandria, Leland Waring (1819-1908). Waring has autographed the front flyleaf, and Coyle has written a note commemorating the event. He writes about Waring's testimony in an entry dated July 28. "He was asked many questions by the brethren about slavery and what he heard and saw while in bondage. All we have heard about the cruelty of masters to their slaves was more than confirmed by his testimony. The bitterest part of slavery in his estimation was the selling of a wife from the husband, children from parents and brothers from sisters. The reports we have so often heard about the master prostituting the bodies of their female slaves to their hellish lusts was more than true. He has been free about two years and is now employed in preaching." Coyle heard Warring preach on several occasions during his stay in Virginia. His support for the freedmen is also evinced in a 10 August entry: "Afternoon went to L'Ouverture hospital to attend to the wants of the colored troops. . . . About two thirds of them could read and the remainder showed an earnest desire to learn. Numbers asking for spelling books and primers. I met many real real intelligent men who could read, write, and talk well. There were some of the noblest specimens of humanity among these bruised and mangled. . . . Shurly the next generation will bless their names for having suffered so much to purchase liberty for them." Coyle makes several other visits to this hospital, filled with details on the soldiers.
Coyle describes his first trip to the Prince Street prison to preach the Gospel, writing, "The guard admitted me to the ward and locked the gate. I never entered such a place before in my life. Some lying around in groups against the wall, the smell and heat were unsufferable. Some were endeavoring to take it as cool as possible, and had removed their shirts. Some of the prisoners were men of respectable appearance while others seemed to be hardened in sin." He meets many soldiers in the hospital and the prison, often relating their names and stories. He meets one young foreigner who was shanghaied into army service after just two days in the country. After several weeks he becomes quite comfortable with the city and his work. He visits Arlington Cemetery, preaches at a local black church, and describes the horrors he witnesses at the hospital. He also visits Mount Vernon with two of his comrades on 17 August. In mid-August, Coyle makes his way to Washington and then to the front lines of the war at Petersburg. There he preaches and ministers to the soldiers in camps and at the front, performing much the same duties of letter writing and tending to needs. On the steamer en route to the front, he meets a "remarkable boy": "John Eheler who has been in the war two years and is present age is only eleven years. He has been through five battles. Two on the Peninsula, Gettesburgh, Antietam, Mine Run. . . . Went below and stretched ourselves down on the cabin floor, but not to sleep" (22 August). After the war, Rev. Coyle married, raised three children, and continued his ministry in New Jersey; he removed to Stockton, CA in 1875. 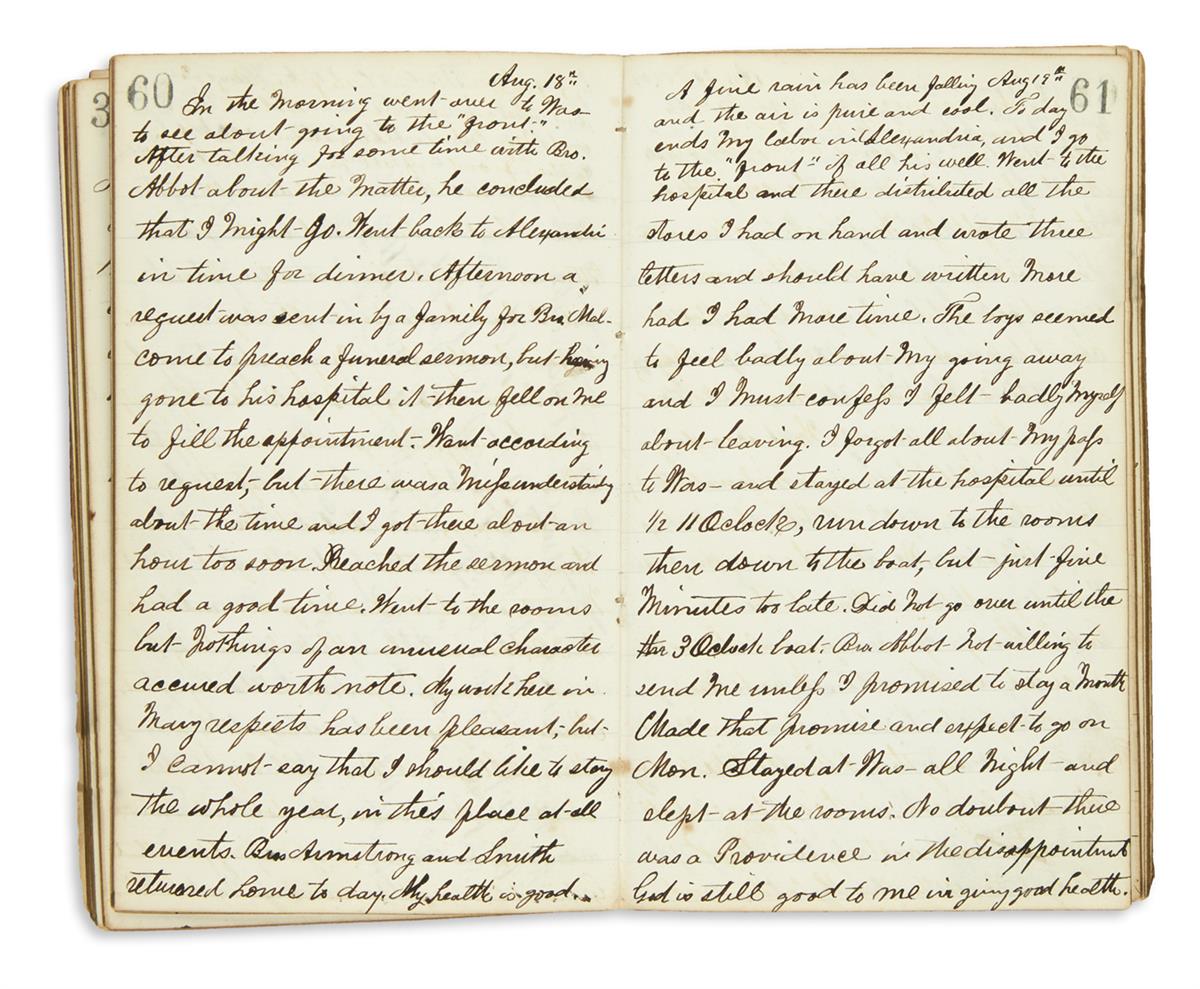