Price Realized: $ 300
Price Realized: $ 375
?Final Price Realized includes Buyer’s Premium added to Hammer Price
Estimate: $ 600 - $ 900
(CIVIL WAR.) Erskine M. Camp. Register of travel requisitions and vendor licenses from the Soldiers' Rest in Washington. 70 (of 72) manuscript register pages 1862-1864, plus [8] pages of post-war military memoranda through 1872. 4to, disbound but with detached rear board present; apparently used at some point as a scrapbook but restored to original state with some staining and warping of leaves, lacking pages 43-44 and its entries. Washington, 1862-1864
Set Alert for Similar Items

Erskine Mason Camp (1830-1876) had been a captain in the 35th New York Infantry. In late 1862 he was detailed to administer the sprawling Soldiers' Rest facility in Washington as Aide-de-Camp and Acting Assistant Quartermaster, where he remained through the end of the war.

This notebook features a 63-page list of transportation requisitions for individual soldiers transported from Soldiers' Rest from 18 December 1862 to 22 May 1863. More than 500 soldiers are named, along with their regiment and destination, sometimes with the name of the authorizing officer. Some are sent toward the front, while others are sent to their home towns for recruiting, leave or recuperation. Harper's Ferry and Fortress Monroe were popular destinations. Sometimes larger groups of deserters or paroled prisoners passed through. For example, on Christmas 1862, 28 paroled prisoners and 3 guards were sent to Annapolis, MD.

Following this is a quite evocative 7-page list of licenses granted to vendors operating in the camp from March to September 1864. They include salesmen of books, stationery, watches, songs, milk, pens, ointments, ice cream, soda water, oysters, ivory ornaments, stencil plates, pictures of Soldiers' Rest, and corps badges; as well as services including several bootblacks, a man offering shaves, and a rat exterminator. Oddly enough, W.H. Bell seems to be the only one selling photographs.

WITH--family papers and ephemera, 48 items, including a 2 1/2-inch oval photograph (of Captain Camp?) in officer's uniform, a larger and photograph (of his widow?); an obituary of brother Elisha E. Camp; a photograph of the minister who married his brother in Washington, 1862; 3 small 1866 broadside obituaries of father Elisha Camp (a veteran of the War of 1812) of Sacket's Harbor, NY; several printed poems including "The Return of the Standards, to His Excellency John A. Andrew, Who suggested the first provision of two thousand soldiers' overcoats in the winter of 1861, by which measure, so much ridiculed in pro-slavery journals, our militia were able to reach Washington earlier than all others"; 32 newspaper clippings mainly relating to western military service circa 1872; and more. 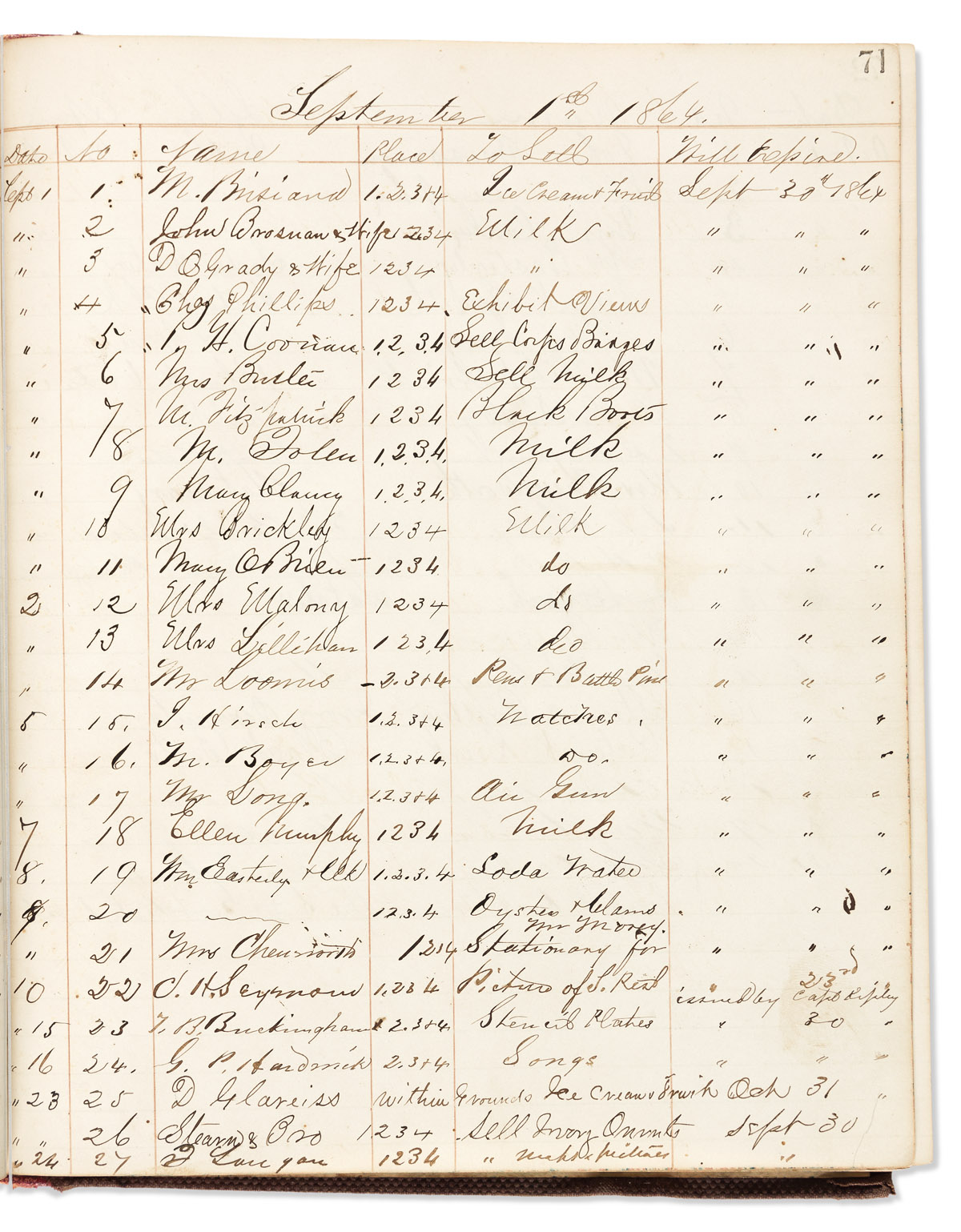