Price Realized: $ 3,200
Price Realized: $ 4,000
?Final Price Realized includes Buyer’s Premium added to Hammer Price
Estimate: $ 2,000 - $ 3,000
LETTERS OF TWO CONFEDERATE SOLDIERS, IN THEIR NATIVE GERMAN (CIVIL WAR--CONFEDERATE.) Correspondence of the Kopke brothers, German-speaking Texans in the Confederate Army. 24 Autograph Letters Signed, all but one of them war-dated: 15 from Heinrich Kopke to his parents, 3 from his brother Charles to his parents, and 6 received from their father; a few with address panels, none with postal markings, most worn with separations at folds. All letters are in German; English translations are available for almost all of the letters. Vp, 1860, 1862-64
Set Alert for Similar Items

The Kopke brothers were German-speaking immigrants from the Schleswig-Holstein region of what is now Germany near the Danish border. They came to America in 1852, joining their father in the small town of San Felipe, TX. During the war, Charles A. Kopke (1839-1881) served as a private in the 35th Texas Cavalry Regiment, also known as "Brown's Regiment." His younger brother Heinrich Friedrich Kopke (born circa 1841) was in the 13th Texas Volunteers.
The collection begins with a retained draft of an 1860 letter from Heinrich to his cousin Eugenius in Germany, describing the wonders of Texas: "If you are willing to work, you can find plenty work here, and better wages" (in translation, as are all of the following quotes). He sends greetings to numerous uncles, aunts, and cousins, and extols the chain migration which helped populate the American frontier: "You can bring all of them to America. . . . We will do everything we can for any one, or all of you." Heinrich, the younger brother, was the first to enlist in the Confederate Army. Included are 14 letters he sent to his father in 1862 and early 1863. The first 12 were mostly from Camp Bates in the port town of Velasco, TX, which traded freely with blockade runners: "About 8 or 9 schooners came in, they carried coffee, whiskey, flour and other merchandise. They did not trade for money, they wanted cotton and corn" (11 May 1862). The regiment's supplies were minimal: "We have no small weapons, all we have are the cannons. . . . We would feel much safer if we had something we can defend ourselves with" (25 May). They had at least one skirmish: "On July Fourth we had a Yankee ship here very close to land and had a little battle . . . the Yanks came in little boats close to land, then they waded through the water and came on land and took what they wanted. . . . By the time we were ready to chase them back, they were gone" (9 July 1862).
In June 1863, Heinrich's regiment finally went east toward the fighting. On 14 June, he wrote his mother from Washington, LA, complaining that the Yankees had "rummaged through the houses and burned fences and took all of the negroes with them. . . . So far, we have not gone hungry yet. We still have food, but I don't know how long it's going to last. Also, I don't know how many of us will survive. I know that some of us will not make it back home." On 27 June 1863 in Berwick, LA, he boasted of a recent victory over a larger Union force of mostly Negro troops: "We were able to defeat them and capture everything they had. . . . Today we got Yankee clothing, beautiful woolen, ten times better than our gray material. . . . When the Yankees buried their dead, they dug a hole and dumped every body into it, whether it was deep enough they did not care. . . . I have seen hands not buried, and parts of their bodies." This was the last of Heinrich's letters in the collection. He may have died soon afterward; we don't find any record of him after the war.
The correspondence of Charles, the older brother, begins after Heinrich's ends. His regiment did coastal garrison duty in Richmond and Galveston, TX. He reported on some drama from his hometown friends on 23 May 1864: "Mosley Battery, which our neighbor Friedrich belongs to, was taken prisoner by the Yanks, but later escaped. . . . I have heard that Leroy Marsh, whose place is close to the Bernards, was wounded and crawled in the grass and water for two days so he would not be found." Charles survived the war, but was soon afflicted with "mania" according to the census. He never married.
Also included are 6 letters from the father, C.H. Kopke. He wrote Heinrich on 27 January 1862: "About the pistol you have, if you need it to protect your life, then keep it for now." In February 1863, he congratulated Heinrich on a recent visitor: "I am glad to hear that President Davis visited the camp, and gave a very interesting speech. It is good to hear from him that hopefully the war will be over soon." He made efforts to get his son released from service: "I rode to Houston to find General Magruder. I went from camp to camp, nobody could tell me where I could find the general" (25 April 1863). Provenance: through Charles and Heinrich's younger brother Louis John Kopke (see lot 207).
with--3 documents relating to their father Charles (or Claus) Heinrich Kopke: his citizenship declaration, 1851, and a pair of tax receipts 1853-54 and a carte-de-visite photograph of an unidentified young Confederate sergeant taken by Hunter Brothers of Bryan, TX. 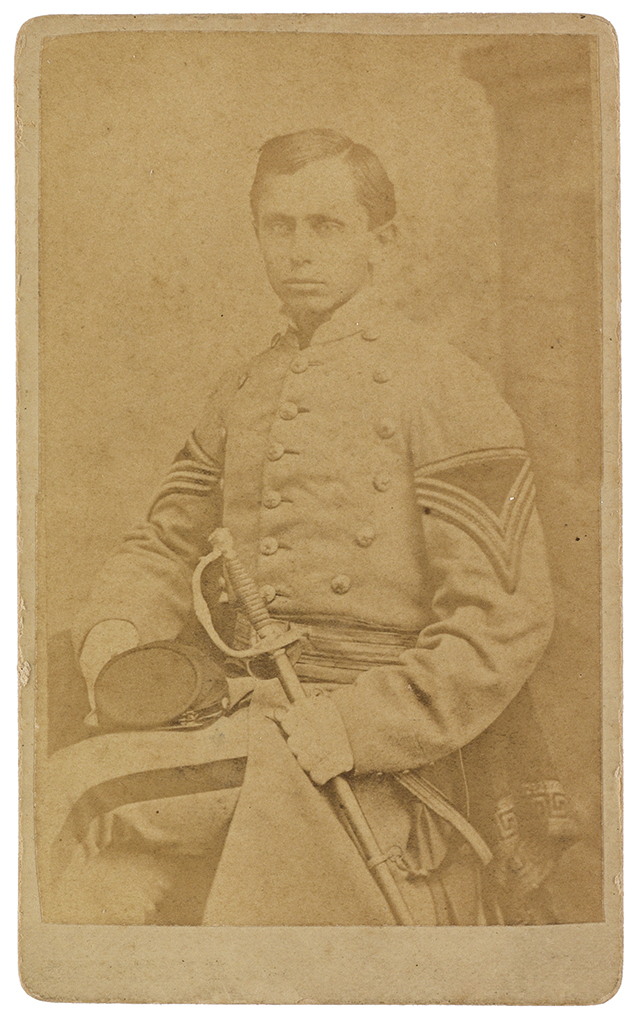 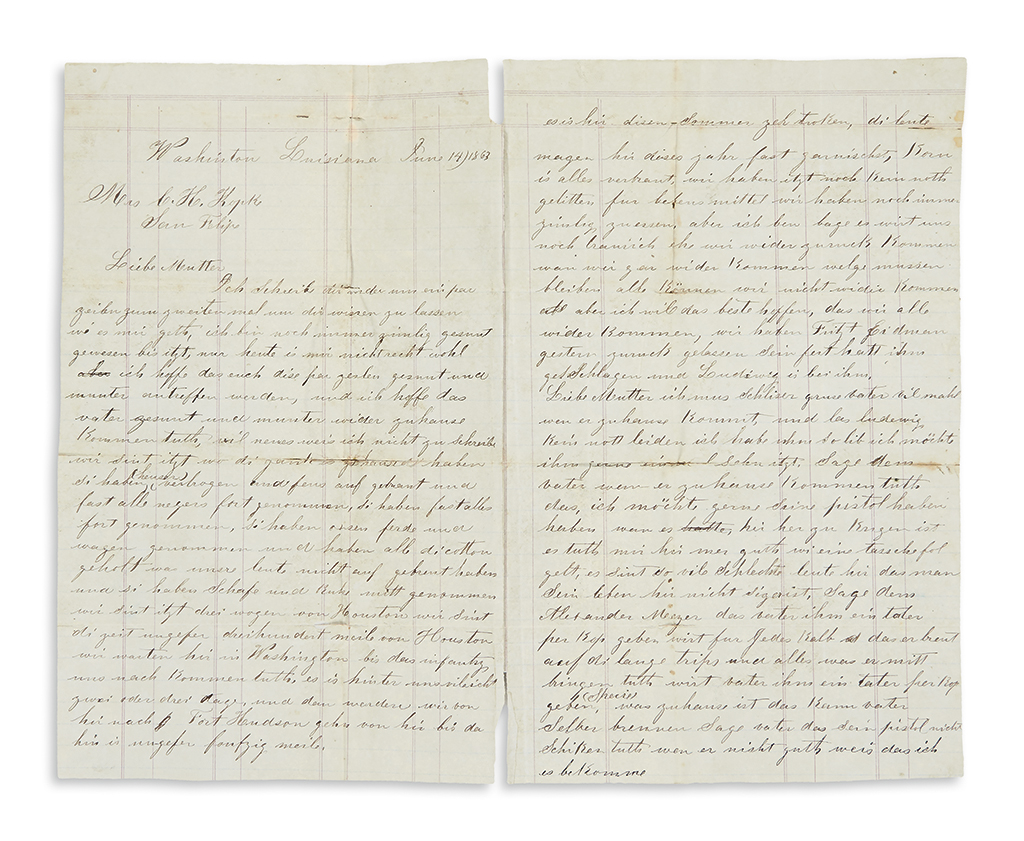