a stirringly patriotic confederate letter, with a fascinating provenance. The 10th Texas Infantry was organized in late 1861 by the former mayor of Atlanta, Allison Nelson, who had recently settled in Texas. The troops were recruited at Virginia Point, Galveston County, and once most of the companies were filled in late October, Nelson was elected to lead the regiment as colonel. This letter was probably sent to Nelson shortly after his election. Its author, Ella Burdett Jones (1846-after 1900) was the daughter of wealthy Virginia Point farmer-lawyer William Jefferson Jones (1810-1897). She was likely fifteen years old when she sewed the regimental flag and wrote this eloquent presentation letter, filled with inspiring Confederate rhetoric. She wrote, in part:
"Allow me to present to you for your regimental colors a flag of the Confederate States of my own make, unpretending in its embellishments, but proud in its associations with the union of a people more homogenous in all the elements of social greatness than any other upon this continent, who vaunt not of any success they fail to achieve and who yield not the palm of true chivalry to any nation upon the globe. . . . All I ask is, if there be a man who may falter amidst the bloody struggle, when battle is offered by the enemy, let him turn to this emblem of all we hold noble and dear and his own strong arm and dauntless spirit cannot fail to conquer. It is the unyielding temper enlisted in a righteous cause, which will strike terror to the hearts of a slavish and selfish race, who, by invading Texas soil, endeavour to make our people the same pliant subjects with themselves of a self-imposed but perfidious tyranny." A full transcript is available.
Colonel Nelson was promoted to Brigadier General in September 1862, and then died of typhoid fever the following month in Austin, Arkansas. He was succeeded in command by Roger Q. Mills, who presumably assumed possession of the regimental files (including this letter). Colonel Mills and the rest of the 10th Texas were captured at the Battle of Arkansas Post on 11 January 1863. Under Ella Jones's signature is, written by a Union soldier in an unidentified second hand, "Captured at Arkansas Post among the other Secesh trophies that we took there." Finally, on the fourth page, is a note from a Yankee woman named Mary, forwarding the letter as a curiosity to an unidentified friend; it was found among the papers of the Russell family of Cleveland, OH. The rather mundane and frivolous nature of the added Yankee portion of the letter offers an interesting contrast to the passion of the Confederate girl's letter.
As for Ella Jones, who wrote the original letter, she later married Theodore Kent Thompson, chief auditor of Galveston. She found another outlet for her patriotism after the war, becoming active in the Daughters of the American Revolution. Her impassioned letter to Colonel Nelson, written at the start of the war, has traveled through many hands, but has never been published until now. 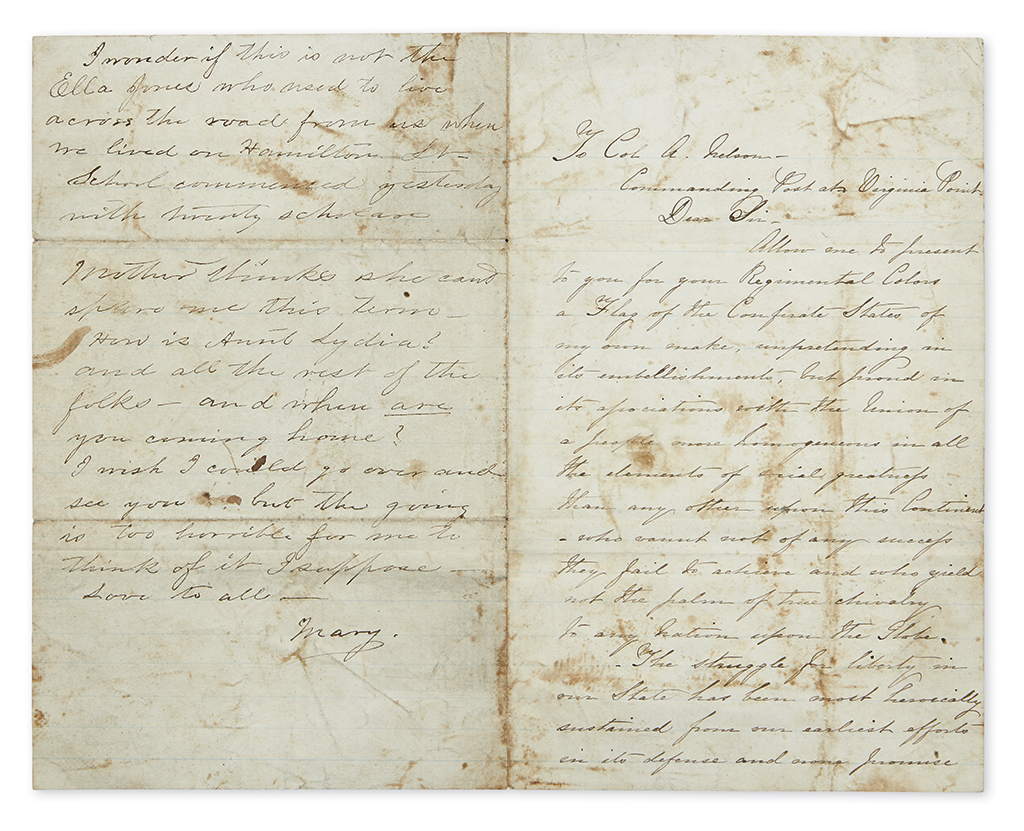