Benjamin Eustace McCulloch (1845-1916) was an officer in the 1st Texas Mounted Rifles, reaching the rank of captain by the war's end. He came from a very prominent Texas Confederate family; his father Henry E. McCulloch was the founding commander of the 1st Texas Mounted Rifles and then became a Brigadier General, while his namesake uncle Ben McCulloch was also a brigadier general and famed martyr to the Confederate cause. Perhaps the most significant item in this collection is a printed circular letter from Colonel Henry E. McCulloch to his troops in the 1st Texas Mounted Rifles, urging them to re-enlist, and referencing the death of his brother General Benjamin McCulloch: "We commenced together, among the very first soldiers in this war. My heart, soul, body, home, wife, children, all are in it. The blood of my brother, who was to me the dearest being on earth, has been shed in it, and I intend to remain in it until peace is made." Addressed in manuscript on verso to the author's son Ben E. McCulloch in Seguin, TX.
Also interesting is Capt. McCulloch's account of General McCulloch's return to Texas at the close to the war in June 1865, listing the loyal troops who accompanied his father "when it was believed by every one that the Brush men (deserters) would attempt to assassinate and rob him & his party en route of what little private property they had." Prairie View, TX, 19 July 1867.
The lot also includes: Letter from Captain McFarland to Lt. McCulloch, offering advice on the coming election for 3rd Lieutenant. Sherman, TX, 25 September 1864 10 orders, passes and receipts addressed to Ben E. McCulloch, 4 of them signed by his father General Henry McCulloch, 1862-65 Letter Signed by Arkansas Senator James H. Berry, regarding a speech on "your uncle General McCulloch," 8 July 1900 List of the officers of the 1st Texas Mounted Rifles as of October 1861, transcribed by McCulloch in 1904 4 related newspaper clippings including McCulloch's obituary, 1914 and undated.
Provenance: presumably (see above lot 99) by descent to widow Cora Barton McCulloch (1856-1943), and her grandson Barton Watson (1922-1991) of Buda, TX; thence sold to Gerald Fox in March 1958. 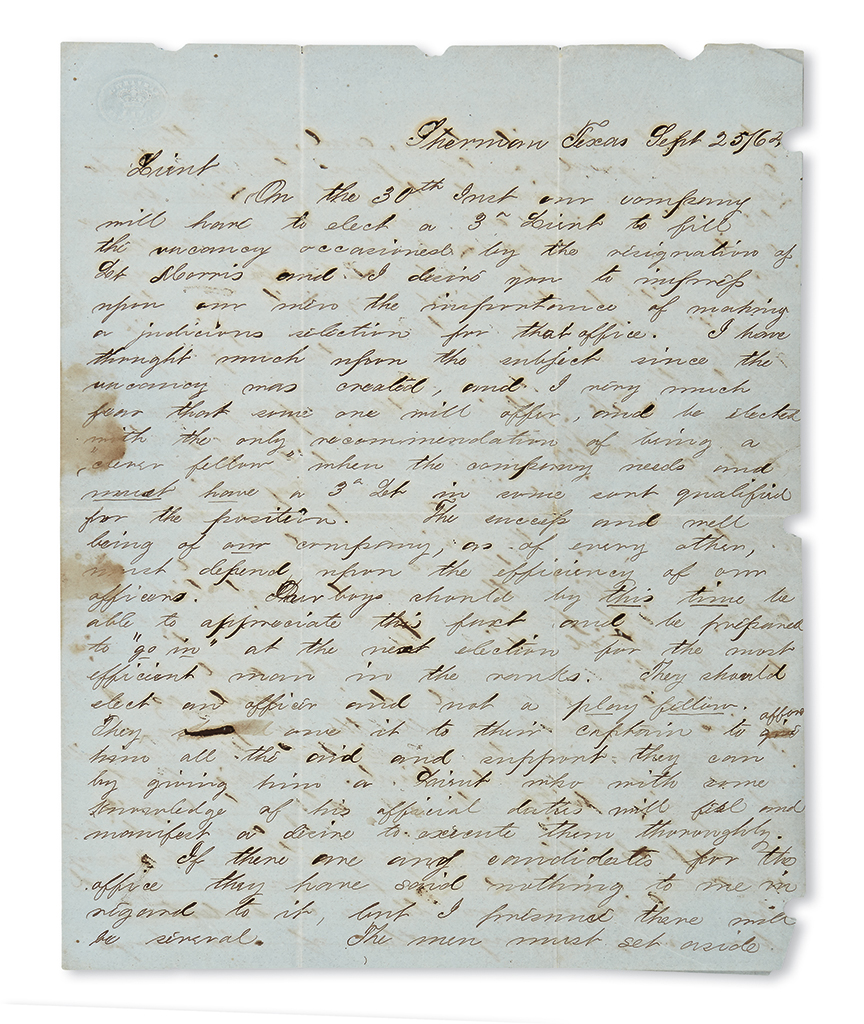