Price Realized: $ 7,500
Price Realized: $ 9,375
?Final Price Realized includes Buyer’s Premium added to Hammer Price
Estimate: $ 4,000 - $ 6,000
(CIVIL WAR--IOWA.) Archive of correspondence of the Iowa Sanitary Commission, many by agent Annie Wittenmyer in the field. 18 manuscript letters, one printed circular, one clipping, and one carte-de-visite, with 9 of the letters and the photograph being signed by Wittenmyer, and most of the letters addressed to Governor Samuel J. Kirkwood; condition generally strong. Vp, 1861-64
Set Alert for Similar Items

Sarah "Annie" Turner Wittenmyer (1827-1900) was a major figure in Iowa's Civil War history as agent for the Sanitary Commission, visiting field hospitals, raising funds for supplies, and establishing orphanages. She was later the founding president of the Women's Christian Temperance Union. In the first letter in this archive, dated early in the war on 26 October 1861 from Keokuk, she describes her extensive tour of the front to Governor Kirkwood, advises that "the sick of our Iowa troops are scattered from here to Mound City, every military hospital has its Iowa representatives, but the 2nd & 7th Iowa regiments . . . are suffering the most." She also boasts, "I have been very successful in my efforts to organize societies throughout the state, auxilery to our society here." She describes her journey with supplies to Milliken's Bend, LA on 7 January 1862 [1863]: "The rebels had planted batteries on the river, and the journey was extremely hazardous . . . before we reached Vicksburg we met the fleet returning; the expedition against Vicksburg has proved a failure." Iowa soldiers there have been "subjected to great exposure, and the food has consisted mainly of bacon and hard bread, while they were forced for many days to drink of the poisonous waters of the Yazoo." A week later, she expressed yet greater urgency about a boatload of injured troops: "Most of them are severely wounded, dreadfully mangled. . . . The wounded were without cots, had to be laid on blankets & mattresses on the floor." In Tennessee on 14 June 1862, she informs the governor that many Iowa soldiers are recuperating in "low malarious or unhealthy districts, rendering the recovery of our sick tedious and uncertain," and recommends new hospitals along the Upper Mississippi. In a long 7 July 1864 letter to R.G. Orwig, she defends herself against charges of obstructionism, though she is "too much occupied with the interests of the tens of thousands of sick wounded and dying soldiers that are around me, to answer at great length." A letter from Wittenmyer's secretary William Milne is written from a hospital in Memphis on 28 March 1863, lamenting that soldiers of the 28th Iowa "are here rotting in hospital; among strangers while they might be at home under the care of their friends."
Also included are a carte-de-visite of Lookout Mountain inscribed and signed by Wittenmyer, 1864; a circular from the Sanitary Commission discussing Wittenmyer; two War Department letters granting her a passes to travel within the lines of the United States Army, 1862; a manuscript report of the Ladies Aid Society, 1862; a newspaper clipping referencing her work, 1862; a letter to Wittenmyer from Iowa Governor William M. Stone, 1864; and 4 field letters from her colleague Ira M. Gifford.
This archive is an important alternate perspective on Iowa's Civil War history, and a testament to one woman's unflagging contributions to the war effort. 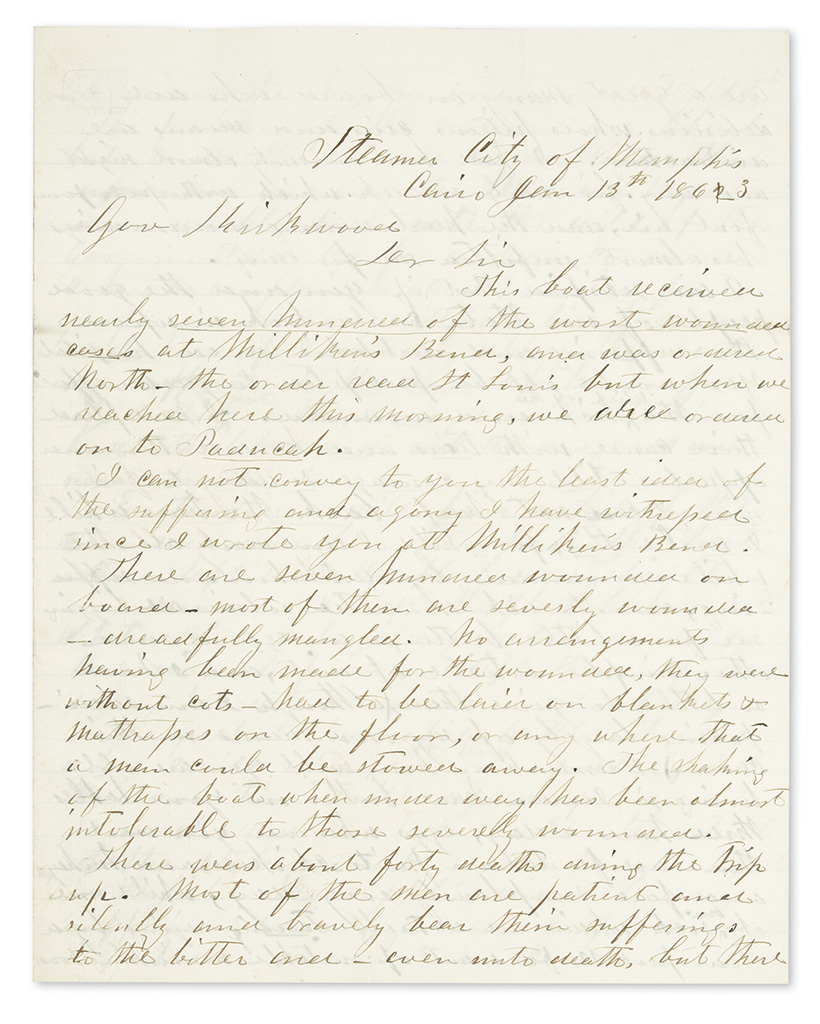