William F. Wright (1837-1905) enlisted in the 3rd Iowa Infantry regiment in May 1861 from Warren County, Iowa, not far south of Des Moines. He reached the rank of sergeant in 1863 and survived to be mustered out in 1864. This diary begins with the day of enlistment early in the war, on 27 May. The most dramatic portion was written with his regiment in northern Missouri in July, August and September 1861 as they faced a guerrilla enemy with no clear battle lines. The regiment was frequently on the move by rail and foot, breaking off into companies, squads, and scouting parties, often prone to ambush by raiding parties, with stragglers occasionally getting picked off by snipers--a very different story than the ones told by the soldiers in the massive Army of the Potomac.
On 30 June, Wright's regiment got off a Mississippi River boat in Hannibal, MO, and the next day took a train heading west across the state: "I was surprised to see so many fine residences, also quite a number of slaves were to be seen at work in the fields who cheered lustily as we passed." 18 July found him on a detachment with 9 other men to guard the railroad station in Utica, MO, when they received intelligence that a force of several hundred rebels were coming for them that night--a threat that he faced bravely, at least in hindsight: "Daylight came and no enemy. We were disappointed as we were well prepared for them and would have been pleased to have seen 50 to 100 make their appearance." On 19 August he reported: "Six of our scouts were surrounded by 25 of the enemy. They killed Corporal Dix. The others made their escape after killing 3 or 4 of the enemy." The Iowa boys seemed prone to looting, with the worst example in the town of Shelbina on 7 September, a town where they had suffered losses a few days before: "The boys were allowed to go where they pleased and they took and destroyed ev'y thing in town. When ever a chicken was heard to crow, a dozen men were ready to start for the place. Chickens and pigs were kiled, women's dresses taken, children's playthings, &c &c." The regiment also had a few drinkers. In Macon, MO, Wright and friends "droped into a brewery. There were quite a number of the boys there. Some of them were trading their shoes, some shirts and others drawers for beer. I do not know whether they were their own clothes, or whether they had stolen them" (12 September).
After more than two months of skirmishing and near-misses, the regiment saw its first pitched battle on 17 September in the Action at Blue Mills Landing, also known as the Battle of Liberty: "3 p.m. we started from Liberty about 600 strong in the direction of the river. The enemies scouts were retreating as we went forward. The enemy kiled 4 and wounded one of our men. About 4 o'clock we were fired into by the enemy which was the first that we knew of their position. We were within about 100 yds of their lines when we were fired on. . . . We fought about an hour and 20 minutes when we were ordered to fall back, as they had three men to our one and were flanking us. Four of the artillery men were kiled & four wounded which did not leave enough to man the gun, and she was only fired three times before we had to haul her back by hand." The next day he wrote "I have been helping to make coffins for our kild, 12 bodies which will be buried in the evening. . . . The most shocking scene that I have ever witnessed is one of the dead men whose face has been skined, said to have been done by his brother-in-law."
For the remainder of this diary, Wright was mostly stationed around Kansas City and St. Louis, but recorded a few interesting incidents. On 30 September they had a visit from Brigadier General (and United States Senator) James Henry Lane of Kansas: "Old Jim Lane came in with about 2500 men. He is not as well dressed as some of his privates and would not be taken for an officer." On 17 October, he wrote "Took three slaves with us who had run away from Lexington & then we started from Kansas City." Three days later in Quincy, IL, "Will Newton & I went downtown and got lodging for the three darkys who came from Kansas City. We left them with the supt. of the Colored Peopels Church." His introspective final entry was on Christmas at the barracks near St. Louis: "I do not like a sol. life. Would be far from following it from choice, but believe that it is my duty, as we are engaged in a just and noble cause, trying to sustain one of the best governments ever formed. Co. G is not drunk tonight but slightly inebriated."
At the end of the diary, Wright has transcribed a letter from a rebel dated Fillmore, MO, 18 July 1861, reading in part: "I hope when this letter comes to hand, you may have time to read it. And I think that I shal be nearby. And then, as soon as it is red, I shal be near enough to nock your life out of you. I hope the time may come when the flag of the fifteen glorious states may fly over the free and independent. . . . Instead of one thousand of us, there is about 8000 of us, and we are coming there as soon as we can get there."
Sergeant Wright survived the war, married, and raised a family on a farm in Nebraska. More extracts from his lively diary are available upon request. 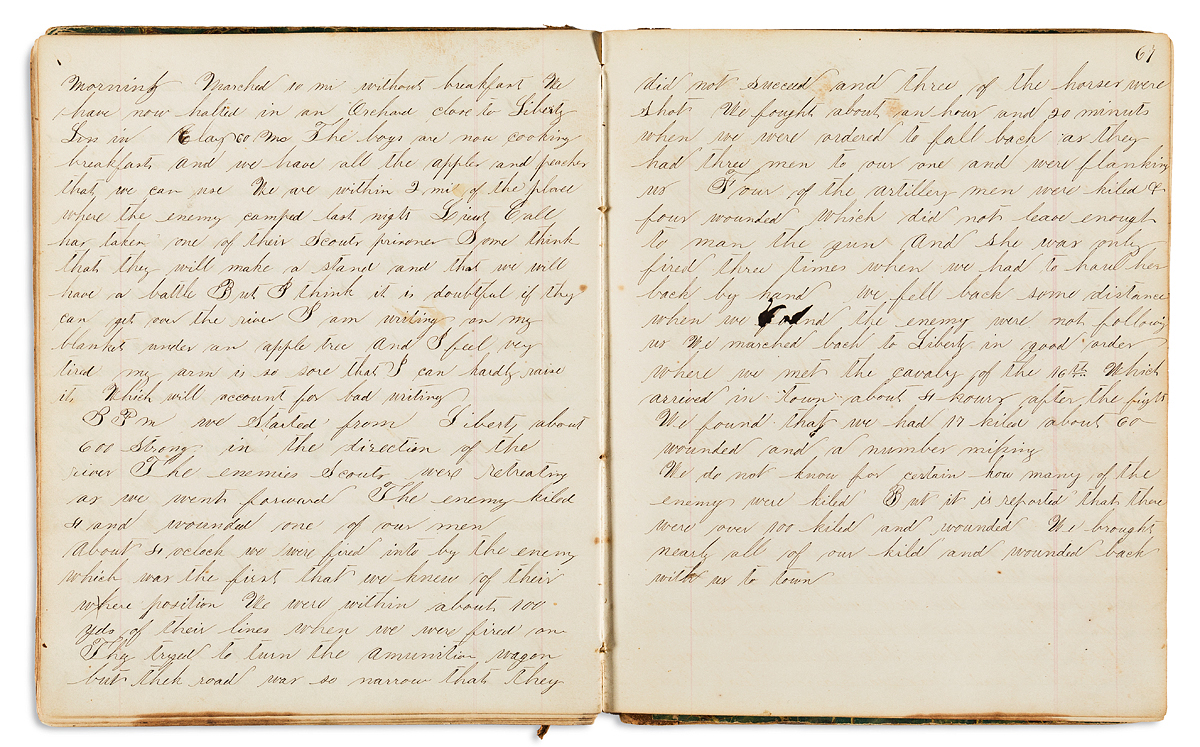