This apparently unpublished diary was kept by the chief engineer of the USS Dacotah, a steam sloop which began at the Brooklyn Navy Yard. It arrived for duty in the North Atlantic Blockading Squadron on 13 March 1862, just 5 days after the Battle of Hampton Roads: "Heard for the first time the news of the terrible encounter between the Merrimac (rebel) and Cumberland and Congress (Federal), also the timely intervention of the Monitor. We all listened with much attention to account of the battle, and the glorious and noble, and the never before equalled bravery and heroism of officers and crew of the Cumberland. She sank with her crew still at and firing her guns, and still the noble and unpolluted ensign of our country waves from her masthead" (13 March). For the first two months of the diary, the main character is not a person but rather that enemy ship: the ironclad CSS Virginia, here described as "the Merrimac," which is mentioned more than 40 times over the next two months. Every day was lived in expectation of a battle with the dreaded ironclad. On 18 March he wrote "We have just received orders in the event the enemy again appears, and we get a chance at them, we are to run them down at full speed. . . . I think we shall cleave her sure if once an opportunity offers." On 29 March he worried: "In carrying out the orders we now have, to run her down at full speed, at the same time we all expect to be compelled to take to the water for the want of a ship to hold us. . . . Sweethearts and wives have been drank to." The men debated "how soon they will remove their boots as soon as she begins to go down rapidly." The Merrimac was gradually bottled in upriver, and this tale ended on 11 May at Norfolk with its self-destruction: "This morning at three o'clock the Merrimac was discovered on fire. Soon the flames spread over her entire length, enshrouding her in one sheet of fire. . . . At 4:54 a.m. the entire mass of flame, a great portion of her iron sheathing, &c., were seen to ascend high into the heavens, presenting one of the most magnificent pyrotechnical views I ever beheld. With this explosion the Merrimac was no more. Not a vestige of her was left." Bookending this first-hand report is a long second-hand discussion of the loss of the USS Monitor at sea in the 3 January 1863 entry.

The Dacotah had two close encounters with President Lincoln. While still on the hunt for the Merrimac, our diarist wrote: "The president looked on at the bombardment with aparent great interest and felt a great anxiety for our side. He passed close to our vessel, bowed, and moved on with his little tug. His pleasing countenance indicated entire satisfaction with the day's bombarding" (8 May 1862). Two months later, the author reported his ship at anchor at Harrison's Landing "in front of Gen. McClellan's headquarters, but a few hundred yards from us. Several balloons were sent up to make observations. The president visited the Gen. incog., and witnessed the balloon reconnaissance. . . . It is reported that the president made an ascension with the balloon" (8 July 1862). Lincoln did indeed visit that day, although the balloon ascension seems to have been just a wild rumor.

Another recurring theme of the diary is encounters with recently enslaved people. On 12 May, the author learns that the local Norfolk women "went so far as to tell the poor deluded beings that the Yankees would bridle them and put the bit in their mouths and drive them like oxen or horses, and haul stone." Several "contrabands" reported for duty on the Dacotah on 28 June: "All are well pleased so far with their new vocation, and are also uncontrolably proud of Uncle Sam's uniform. Their duties on board will be in a great measure menial." In 12 August he wrote "Rec'd on board one contraband. He tells his tale like all the others. This fellow says he left his master to avoid a flogging. The provocation not being sufficiently great to warrant it according to his estimation, he thought he would skedaddle. I learned that the plantation from which we foraged has lost some two hundred negroes. They are now with the army, digging trenches."

The diarist at no point signs his name, but has been identified as Philip G. Peltz (1832-1868), a Philadelphia native who remained in the Navy after the war. The author announces the proud receipt of his chief engineer's commission in his 4 May 1862 entry while serving aboard the Dacotah; Peltz was named as chief engineer of this ship in the 8 February 1862 Philadelphia Enquirer. The diarist makes two mentions of his brother, a naval assistant surgeon, on 29 August 1862 and upon his brother's appointment to the gunboat Chocura on 20 February. Philip Peltz's brother Samuel H. Peltz (1838-1865) was the assistant surgeon aboard the Chocura until his transfer (Washington Evening Star, 29 September 1863).

This well-written and extensive diary is a fresh new source on the best-known naval theater of the war, with the eyewitness account of the Merrimac's destruction being only one of many highlights. 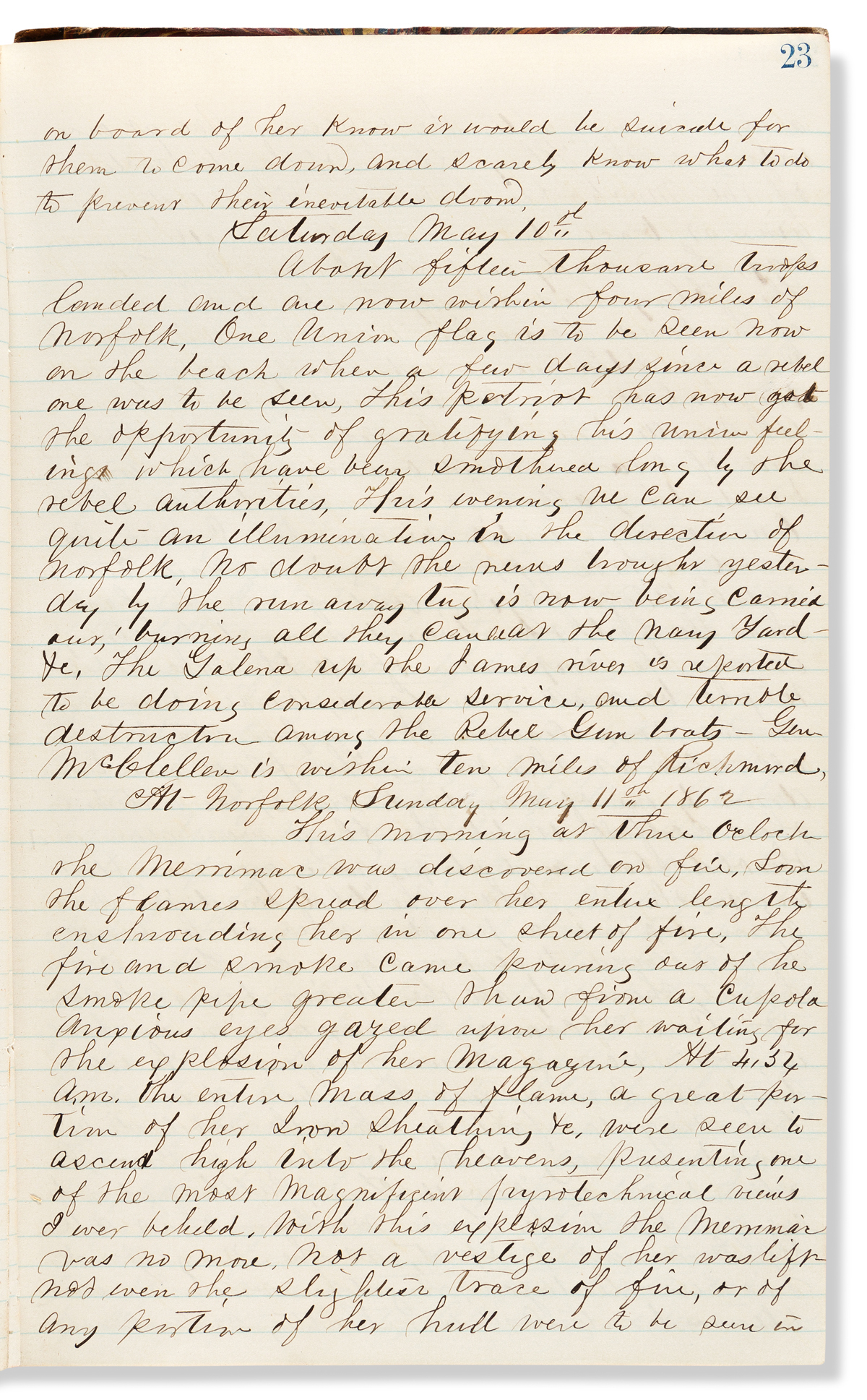