The Confederacy, having taken a handful of Union prisoners in the first months of the war, leased John L. Ligon's Richmond tobacco warehouse for use as a military prison by June 1861. Also known as "Liggon's," "Rocketts," or "Prison No. 1," it was soon filled to capacity with prisoners from Bull Run, Ball's Bluff, and other early battles. From 21 October 1861 to 16 January 1862, it was under the command of Lieutenant James Thomas Watt Hairston (1835-1908). In this early phase of the war, a veneer of gentlemanly respect still prevailed between officers of the two nations. Hairston later recalled proudly that he "circulated among the prisoners at all hours of the day and night, unarmed and without a guard" and "while I was in charge not an escape was made, nor a prisoner shot." This volume was apparently presented as a gift to Hairston--by the inmates. The Ligon's era came to an end in March 1862, soon after Lt. Hairston's departure, when the prisoners were transferred to the newly opened Libby Prison. The full horrors of the Confederate prison system were still in the future.
Laid down on the front free endpaper is a large salted paper photograph, 7 x 4 1/4 inches, of Lieutenant Hairston wearing the uniform of the 11th Mississippi Infantry, the "Prairie Guards." The first flyleaf bears his inscription as "Lieut Comdg C.S. Prison, Richmond, Va.," also giving his home address in Mississippi. On the second flyleaf is a full-page decorative crest bearing the commandant's name, over a smaller Union crest reading "From Charles L. Chapman, a Federal prisoner of war, captured at the Battle of Cross Lanes, Western Virginia." In the rear of the volume are other inscriptions by the Union prisoners, most notably "The Prisoners' Song" by Captain Isaac W. Hart, written out in a calligraphic hand by another lieutenant from a New York regiment. The poem concludes with a manuscript seal of the Richmond Prison Association reading "Bite and Be Damned, 1861," featuring several lice in a decorative pattern. A.J. McCleary wrote a piece in shorthand, noting that he wrote it while "confined in Ligon's Tobacco Warehouse." He added a later note thanking "the owner of this book" for "the many little acts of kindness that have been done . . . during their confinement in Richmond, Va. as prisoners of war." A small pencil sketch by Californian prisoner W.H. Sloanaker depicts "Mrs. Van Lew, afterwards postmistress of Richmond, & a great friend of the prisoners." Dozens of prisoners filled ten pages with their autograph inscriptions listing their rank and regiment.
Embellishments aside, this volume offers a detailed roll of Union prisoners, apparently compiled and written out by the prisoners themselves, with later entries in a different hand perhaps added by Hairston's staff. 3159 prisoners are listed, each with his rank, company, regiment, and ultimate disposition: transferred, exchanged, paroled, or dead. The longer-term inmates were mostly Union officers, and included several noteworthy names. Alfred Ely was a United States Representative from Rochester, NY who was caught while observing at Bull Run; he later published his prison diary. Among the colonels were Alfred M. Wood of the 14th New York, a future mayor of Brooklyn; Milton Cogswell of the 42nd New York, later a Reconstruction mayor of Charleston, SC; and William Raymond Lee of the 20th Massachusetts. All four of these men signed the register, as well as surgeon Edward H.R. Revere (a grandson of Paul Revere). Famed Irish-American general Michael Corcoran of the 69th New York also appears on the prisoner rolls, though he did not sign. Following the main list of prisoners is a list of 19 men headed "Negroes," among them was Robert Holloway, captured at Bull Run. He was the personal servant of General Ambrose Burnside, who made extraordinary efforts to secure his release, as detailed in a 21 July 2011 New York Times story. An important artifact of the first Confederate prison, rich in detail.

with--two related reference books: Jeffrey, Richmond Prisons 1861-1862 (1893), which includes Hairston's memories and a description of this book, pages 85-91, as well as several images of its pages and Trout, They Followed the Plume: The Story of J.E.B. Stuart and his Staff (1993), featuring a biographical article on Lieutenant Hairston. 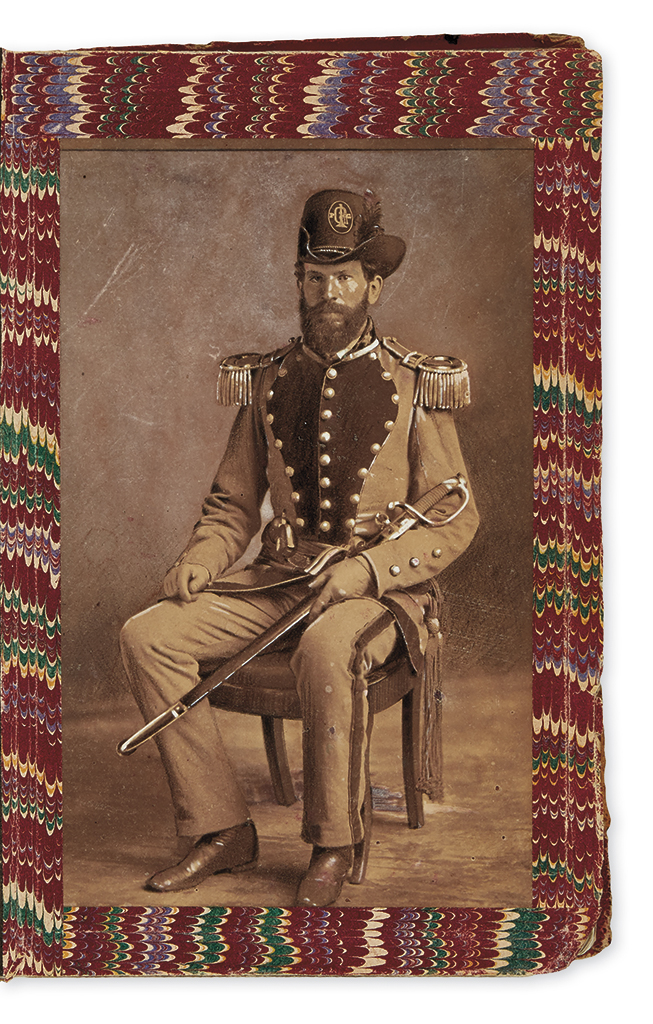