Charles Carr (1849-1920) was an Illinois native who went west in 1871 to work for his uncle Rodney Quinby, a Colorado sheep rancher. His diary begins in camp along the Dry Cimarron River in northeastern New Mexico, down to Las Vegas, NM and Fort Sumner, and then back north into Colorado. Part of his journey was along the famous Goodnight-Loving Trail: "We traveled part of the day on the Goodnight Trail. Mr. Goodnight is a large stock man on the St. Charles Creek, Colorado. He made a trail from Texas to Denver" (31 October 1871). Carr spends almost a month in Las Vegas, NM, playing cards, attending fandangos and brawling: "Cooper got into a fray, and I was in for protecting him when the natives concluded they would give me a round, but very fortunately Uncle R & Richardson came and escourted us home, or else probably we would have got hurt, perhaps killed" (5 November). He describes his camp cook on the trail as an "opium eater and he is the worst looking specimen of humanity I ever saw. There is great holes in his skull, and how he lives beats me. But he sleep most all of the time" (9 December). Carr was quite literally a tenderfoot: 'My boots are all gone and they hurt my feet. So I concluded I would try and get a piece of buffalo hide and get the Mexicans to make me a pair of moccasins. I went to the dead buffalo and tried to skin off a piece, but could not stand the smell" (22 December 1871). He came across many rough-edged frontiersmen on the trail: "I have never in all my travels met with a family that was so deprived of virtue and self-respect as they. I had often heard of these terrible Texans, and here I have met one of the worst. They talk of killing people as though they were sheep and not humans" (29 October 1871).
Charles married Viola C. Whiting (1851-1943) in Illinois on 26 September 1872, during a break in the diary. When the diary resumes, he is building a new house for his family and carving a farmstead out of the wilderness, apparently just across the New Mexico border in Trinidad, CO. He travels from Trinidad through Pueblo to the town of Fountain near Colorado Springs, and remains active in sheep herding, apparently now on his own account: "Dipped the bucks and this afternoon went to look after an antelope but failed to find any. I went to the sheep and found them all scatered, and gave the herder a slap and he rounded them up pretty lively" (22 June 1874). Although the legendary range wars between sheep and cattle men were just starting to heat up around this period, Carr seems much more concerned with Indians: 'Miguel waked me up this morning and told me the Indians was coming. It is needless to say I was not alert, for I was, but it was a false alarm" (13 May 1875) and 'Two Mexicans made their appearance on horseback and I thought them Indians, and I was never so frightened in all my life, but I stood my ground' (17 May 1875). A more practical concern was the constant search for men to tend his herd: 'The men commenced work this morning and then they quit and wanted more wages. All left but Nepumucino. Will went into town after more men" (16 October 1875). Additional extracts from this lively Wild West diary are available by request. 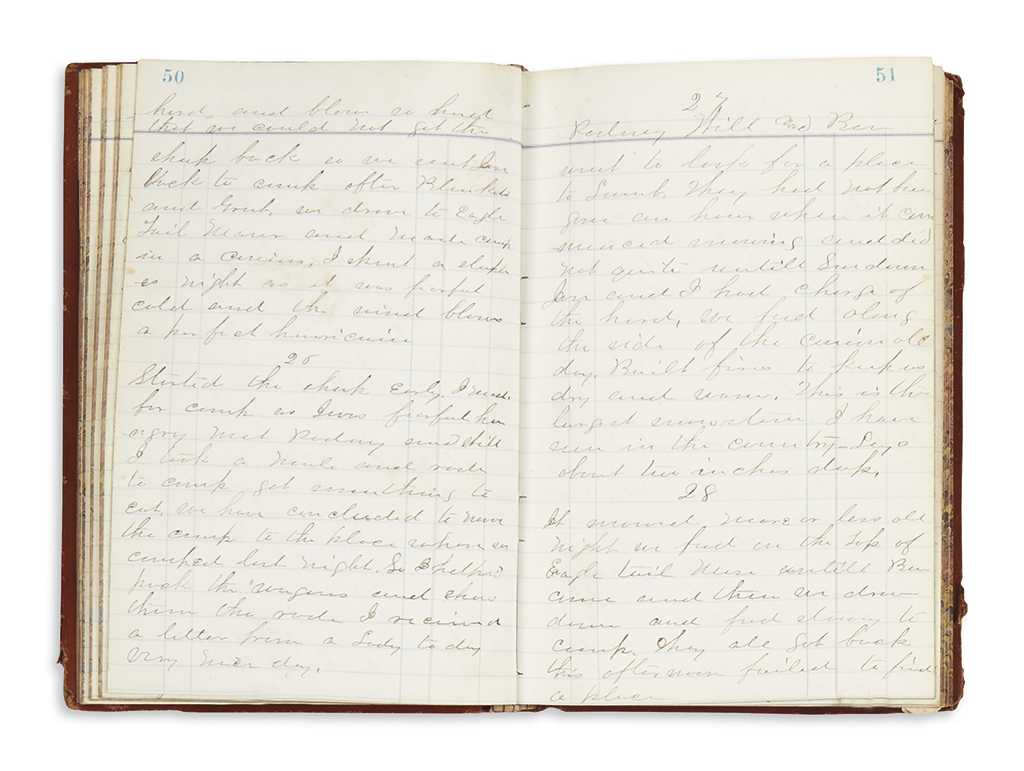