Daniel Henry Chase (1814-1905) was valedictorian of the first graduating class of Wesleyan University in Middletown, CT in 1833. By virtue of both his grades and his place in the alphabet, he appears as #1 in their alumni register. The first and most significant of his 4 diaries offered here begins while he served as a young tutor at Wesleyan. He soon opened his own school, the Middletown Institute and Preparatory School, which he ran for the next 35 years. On the eve of its opening, he wrote "It is no small thing to commence . . . and establish a school. . . . For my own part, my distrust in self was never greater" (25 August 1835)." Among his initial crop of 8 students, he noted "Some egregiously dull, duller than I had ever before conceived. Still I shall persevere and try to make something of them" (1 September 1835.)
Chase frequently attended abolitionist meetings in Middletown--in one case naming three ruffians who disturbed the meeting and "pounded " their bell-ringer (23-24 November 1837). On 15 March 1838 he wrote: "My country is infatuated, ignorant, and in some regions unutterably degraded. Slavery is the curse of curses, the tremendous scourge which lashes into fury both north and south." He records a debate with his old professor Daniel Whedon on 14 April 1838, in which we can say with hindsight they were both wrong. Whedon asserted that "the abolitionists have . . . made the matter ten thousand times worse than before," while Chase argued that "We must have discussion, the south must have it previous to a dissolution of the Union if they aim at that. Investigation and debate will cure them and change their sentiments." His progressivism did not shade into radicalism. On a trip to New York, Chase had the opportunity to hear the radical feminist and abolitionist speaker Fanny Wright, and was quite horrified: "She glared around the room like a hyena. . . . I could not remain in conscience and therefore made a retreat to the prayer meeting" (30 September 1837). He was more impressed by the African-American abolitionist James McCune Smith (19 June 1838).
The next diary is devoted to Chase's trip to Europe in 1838 and 1839, as he took a break from his teaching duties. Curiously, his letters to his wife from another 1867 trip to Europe are tipped in at random intervals. A handful of entries from 1841 to 1846 include some of the more dramatic events in Chase's life: an entry on the eve of his wedding night, the birth of his first child, and shortly afterward his wife's "sudden and alarming symptoms of insanity. . . . She screamed, groaned, sang, talked, saw spectres, tore her clothing" (2 June 1843). She seems to have made a full recovery. The diaries then skip several decades, resuming in 1892 with Chase approaching his 78th birthday. These last two volumes continue in a neat tidy hand which gradually becomes more difficult to read after 1900. The last entry is dated 1 January 1905 at the age of 90, just a few months before his death.
The lot also includes two of Chase's composition books, with manuscript essays titled "A New Theory of Evolution: Darwinism is Infidelity" (3 versions); "Slate Writing by Spirits"; "The Story of Eden"; and "Everlasting Punishment is not Eternal Torment." These essays help complete the picture of a principled and pious educator who led an often eventful life. Provenance: consigned by a descendant. 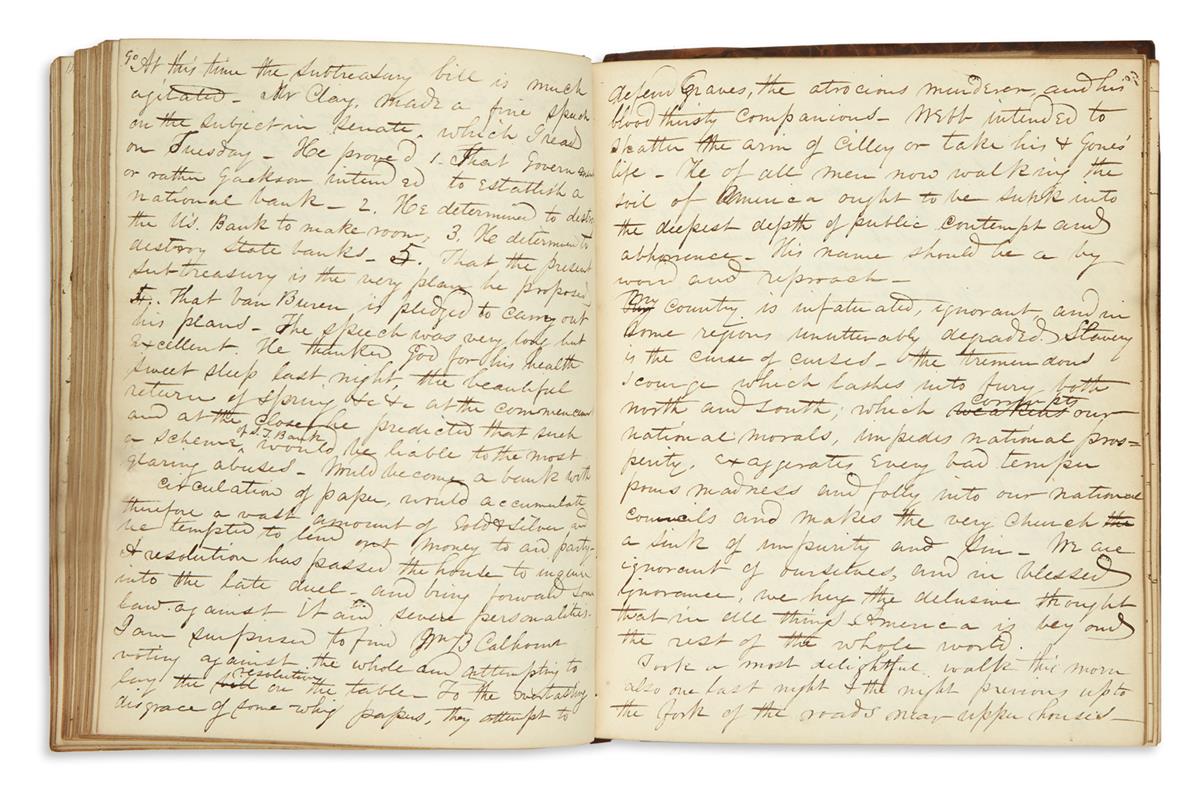