Price Realized: $ 24,000
Price Realized: $ 30,000
?Final Price Realized includes Buyer’s Premium added to Hammer Price
Estimate: $ 20,000 - $ 30,000
"WE NEVER ONCE THOUGHT OF A KING" (CONSTITUTION.) Bound volume of the Pennsylvania Herald, featuring a very early printing of the United States Constitution and more. 265 newspaper issues (101 of the 111 issues of the biweekly Pennsylvania Herald and General Advertiser issued from 24 January 1787 to 30 January 1788; followed by 164 of of the 179 issues of Dunlap's American Daily Advertiser from 6 June to 31 December 1791), each 4 pages, plus a one-sheet supplement dated 31 March 1787. Folio, contemporary 1/2 calf, moderate wear; 47 issues of the Herald and 121 issues of Dunlap's are lacking one or more clipped advertisements (although not the Constitution issue of the Herald), occasional later check marks in blue pencil many of the Herald issues marked with subscriber's name in upper margin, some issues folded before binding, minimal dampstaining toward rear. Philadelphia, 1787-91
Set Alert for Similar Items

The Pennsylvania Herald and General Advertiser was founded by the important magazine and atlas publisher Mathew Carey of American Museum fame, and was taken over starting with the 3 February 1787 issue by William Spotswood. Spotswood's editor was Alexander Dallas, later a cabinet member in the Madison administration.

The great subject of national interest covered in this volume was the Constitutional Convention which ran in Philadelphia from May to September 1787. The 30 May issue reports that the convention's delegates have named George Washington as their leader, and added "the decisive effect it must have upon the peace and prosperity of America, though everything should certainly be given to prudence and deliberation, not a moment can be spared to useless forms or unprofitable controversy." Editor Dallas apparently had a source from within the rather secretive proceedings. In reply to rumors that the convention was setting up a new monarchy, his source explained that "tho we cannot, affirmatively, tell you what we are doing; we can, negatively, tell you what we are not doing--we never once thought of a king" (18 August 1787). On 8 September: "We hear that the Convention propose to adjourn next week, after laying America under such obligations to them for their long, painful and disinterested labours, to establish her liberty upon a permanent basis, as no time will ever cancel." On 18 September they reported that "the federal convention, after having concluded the important and difficult task of framing a federal system of government, broke up; and many of the delegates, we are informed, are already on their way to communicate to their anxious constituents the result of their deliberations. . . . We trust every friend to the peace and prosperity of America, is prepared to receive with respect, and to consider with candour, the propositions which will then be divulged." The Pennsylvania delegates were of course able to present the results to their home legislature more swiftly than those from other states, and thus the Constitution was first unveiled to a larger audience in the Pennsylvania General Assembly on 18 September at 11 a.m.

The 20 September 1787 issue prints the Constitution in full, as it was presented to the states for ratification (the text had first appeared in five Philadelphia daily newspapers the previous day). Benjamin Franklin, one of the delegates and also the sitting President of Pennsylvania, introduced the new creation to the assembly: "We have now the honor to present to this house the plan of government for the United States. . . . We sincerely hope and believe that the result . . . will tend to promote the happiness and prosperity of this commonwealth in particular, and of the United States in general." Pennsylvania's debates over ratification fill the October through December 1787 issues.

This volume is full of interest even behind the momentous launch of the Constitution. The culmination of Shays' Rebellion is covered in the first months of this volume. Benjamin Franklin, as president of the state, appears frequently in these pages. His proclamation on the apprehension of the Shays' Rebellion rebels, signed in type with the state seal, appears in the 17 March 1787 issue. The ordinance creating the Northwest Territory is printed in full in the 25 July 1787 issue. A long article on the Montgolfier balloon ascensions spans the 20 and 24 October 1787 issues. Discussion of the abolition of the slave trade is interspersed with advertisements for runaway slaves.

Per the Library of Congress, the last known issue of the Herald was issued just two weeks after this run ends, on 14 February 1788. Most of these Herald issues are marked in the upper margin for original subscriber "J. Bloomfield Esq.," very likely New Jersey Attorney General Joseph Bloomfield (1753-1823), who later served as the state's governor.

The rear of the volume contains issues of Dunlap's American Daily Advertiser from June to December 1791. A black-bordered obituary of patriot-printer William Bradford appears in the 28 September 1791 issue; President Washington's State of the Union address appears in the 26 October 1791 issue. 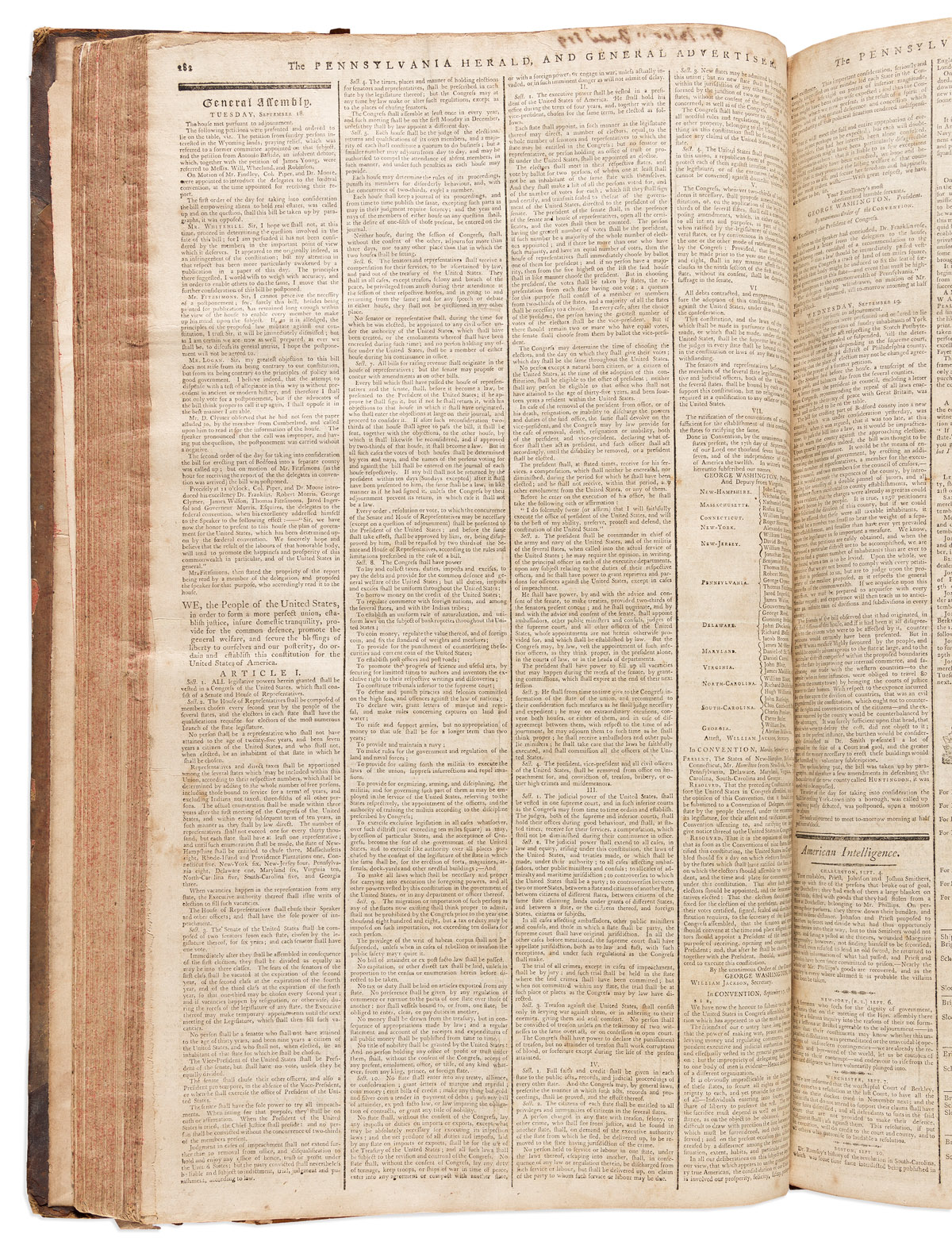