The Newsboys and Children's Aid Society of the District of Columbia was incorporated in February 1886, and opened its office at 1014 F Street NW on 24 May 1886, when this volume begins. In reaction to widespread poverty among the city's children, their initial goal was to place children in informal foster homes, apprenticeships, or orphanages. This notebook was kept by one of the society's outreach workers--quite possibly their only employee. It is an informal record of children she has attempted to aid, sometimes with success but more often ending in disappointment.

The children's stories (both black and white) are almost uniformly bleak. Charles Dickens could have used this notebook for source material. In an era preoccupied with refined manners, these reports are raw and direct. On 2 August 1886, "Went to visit Essex Court to see Bennie Carrago about some work. He was asleep and his idiotic mother washing clothes in the sink. The furniture consisted of a little old stove and two stools with quantities of dirt. Bennie was glad of the chance to make fifty cents. As I went from the door I was immediately surrounded by at least twenty men, women and boys all fighting and yelling like fiends. Deviltry seems to hold high carnival in this alley." A report on 10 August was received of "a little girl who lives with her mother in one room over a stable in an alley betw. C and Pennsylvania Ave. The mother uses the girl to make money, with either white or black men. The girl is only thirteen, but will become a mother, but is dreadfully diseased." On 21 September 1886 a boy reported that he had walked 24 miles to the city to escape a dangerous situation: "The man with whom he lived kicked him, and struck him over the head with a stick, and he ran away. Got him a place to work at a coal yard." On 18 October 1886 we are introduced to 14-year-old Cora Littlefield, who had a 23-year-old lover. The father showed the aid worker a note from the lover found under Cora's bed--the note is pasted in at the rear of the volume. Cora was placed in the House of Mercy, but soon escaped: "she thinks of nothing but her bad associations." Emily Powell and her eight children lived "all in one bed without food or fire . . . the children are barefooted and have little or no clothes" but the aid worker could not convince any of the children to seek an alternative (6 December 1886). Another mother is described as "a drunk and addicted to the use of morphine" (8 February 1887) and a 12-year-old girl is described as "a thief, a liar, and a prostitute . . . two older sisters have gone the same way." On a rare cheerful note, on 12 August 1886 the newsboys were brought to an amusement park operated by a Mr. Morley, where they took turns riding a roller coaster: "They had a good time enjoying the fun and giving cheers for Mr. Morley. After the riding, Mrs. Hood and myself headed a procession of boys and thanked Mr. Morley."

Although the organization helped many children too young or ill to work, their name suggests a primary interest in newsboys, who were often among the most visible and aggressive street children during this era of rapidly increasing poverty. We spot only one entry which actually describes newsboys in this volume. On 19 February 1887, the worker visits "newsboys who had been arrested. There were five colored boys" who "gambled all the time" and "managed to elude the police by gathering in small squads to play and setting a watch to warn them of the police. . . . The game they play is craps, played with dice." Vincent DiGirolamo's recent book "Crying the News: A History of America's Newsboys," cites Washington's Newsboys and Children's Aid Society for its work with the city's unusually large population of African-American newsboys. In 1888, the year after this volume ends, the society paid tuition for 28 newsboys to attend Howard University (pages 322-3). Newsboys were not just helpless waifs, though, and increasingly organized themselves to pursue better arrangements with their suppliers. The 175-member Washington Newsboys' Union struck in 1883 and won a price cut in April 1886 (pages 290 and 294).

This notebook is unsigned, but was apparently kept by Kate Brown Barlow (1837-1913), a widowed woman in the District with no children of her own. The Washington Evening Star of 18 December 1886 features a long first-person report on the Society's work by Mrs. K.B. Barlow featuring a few of the same children and anecdotes featured in the notebook. She continued in this field through at least 1910, when the census described her as "Inspector, Board Children's Guard." Her 6 October 1913 obituary in the Washington Times described her as "one of the pioneer charity workers of the district." 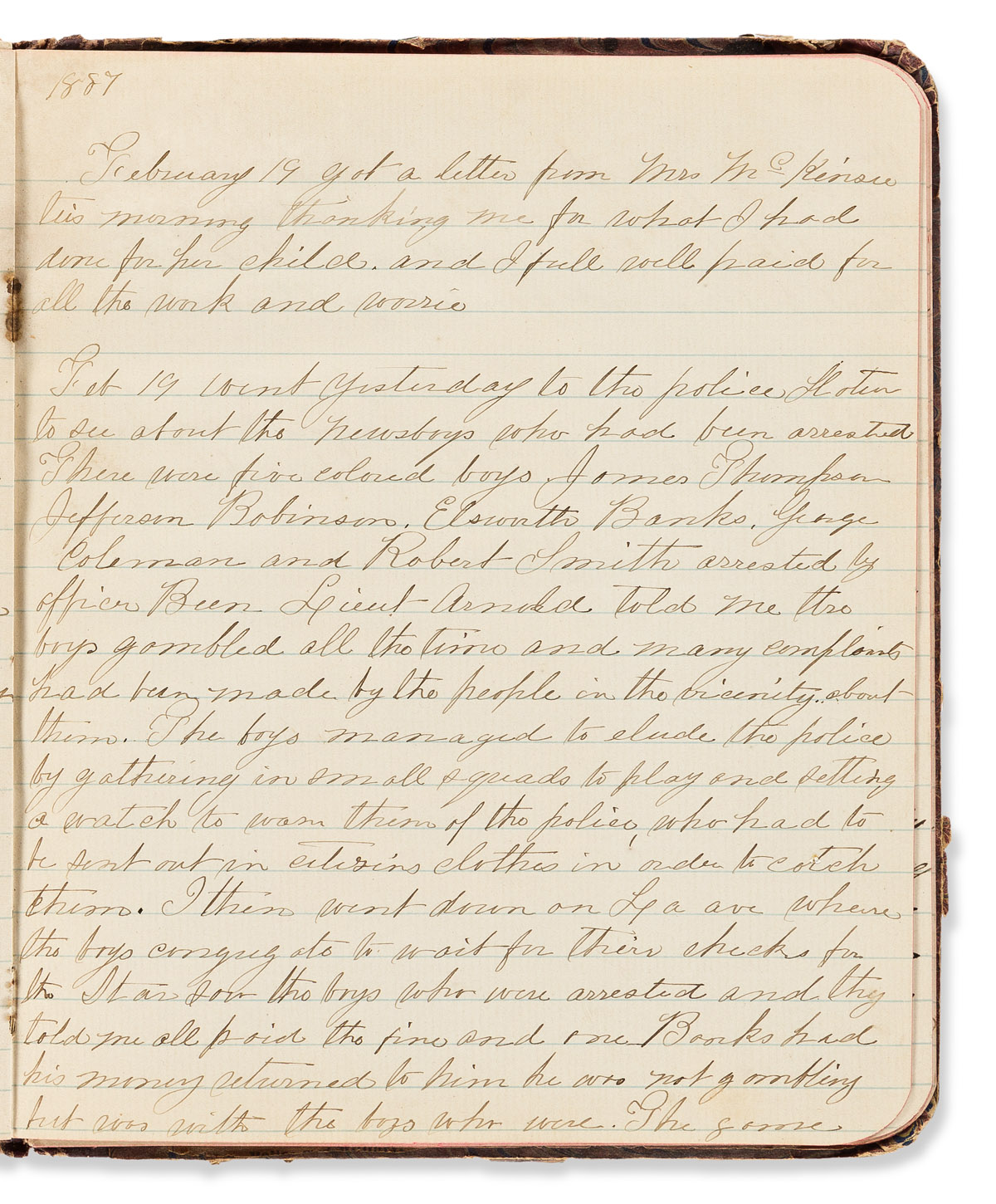