Price Realized: $ 36,000
Price Realized: $ 45,000
?Final Price Realized includes Buyer’s Premium added to Hammer Price
Estimate: $ 20,000 - $ 30,000
MORE LETTERS TO REBECCA (EDUCATION.) PRIMUS, REBECCA. Collection of 41 letters and a 6-stanza poem. A collection of letters, written between 1854 and 1872 addressed to Rebecca Primus, a young woman of color, from her friends, mostly other young women of color, and some family; average 2 to 4 pages, with their original envelopes. Condition generally very good; should be seen. Maryland and New England, 1854-1872
Set Alert for Similar Items

a rare insight into the hearts and minds of a circle of young african american women in mid-nineteenth century. Rebecca Primus (1836-1934), African American educator, was the eldest of four children in the prominent free black family of Holdridge and Mehitable "Hettie" Primus in Hartford, CT. Her paternal great grandfather was an African slave who won his freedom by fighting with the American army during the Revolutionary War. She was a highly literate and active letter-writer, and a collection of her correspondence with friends was celebrated in a wonderful book titled Beloved Sisters and Loving Friends by Farah Jasmine Griffin (Ballantine, 1999). Through the letters in Beloved Sisters, we get a rare insight into the hearts and minds of a circle of young African American women, just prior to, during, and after the Civil War. Rebecca Primus, like many literate young women in New England, traveled down South toward the end of the Civil War to teach the newly liberated slaves. She was sent to Royal Oak, Maryland by the Hartford Freedman's Aid Society. The letters in Beloved Sisters, Loving Friends cover a period up until the year 1868. A new cache of 41 letters from her friends and family has been unearthed, written to Rebecca both in Hartford and in Royal Oak between 1854 and 1872, and we offer them here.
Among the names of Rebecca's frequent correspondents are Eliza from Springfield who writes to say among other things that Frederick Douglass will be giving a lecture there on the "Signs of the Times" and the Dred Scott Decision; while Fannie, who had moved from Hartford to Avon, writes that she is well situated there, but "the white people here are very much prejudiced, and many of them will not notice a colored person. . . but I don't mind," she adds, "for I never could feel like associating with them." Adele Murry from Bangor; Josephine from in Oxford; Julia from Hartford; Carlos and Emeline Sanks from Royal Oak, and her mother from Hartford, all provide a good picture of Rebecca. A letter from her friend Martha talks about conditions at the school and in "Balto" and how the man of the house where she is boarding likes to hunt every day. "The colored people here are great for hunting. My host goes out every evening. Last Saturday he caught a possum, have you ever ate any of them? I like them very well," Martha asks "How are the whites in your town, friendly toward the colored people? Isn't that Trappe (a school) a horrid place? It seems no teacher can remain any length of time there. I learn there have been four teachers there since I left." There was a relationship well beyond friendship with Charles Thomas, with whom she boarded; Rebecca would later invite him up to Hartford after his wife Sarah's passing in October of 1871. Before dying, she deeded her share in Royal Oak property to Charles, who then entrusted all property to William Tilgham to pay off debts; Thomas was apparently in very dire straits (a letter to Rebecca from Tilgham dated January 27, 1872 is among the present cache of letters). In a December 15, 1871 letter to Rebecca, Charles thanks her for inviting him to come to Hartford, understanding his "difficulties" and her willingness to "contemplate his condition," and says he awaits her instructions. Charles Thomas moved up to Hartford and boarded with the Primus family in 1872. He remained there, working for and with the Primus family, and married Rebecca in 1874. There are no letters in this collection written by Rebecca, but one can get a very good idea of her from the letters written to her. Some of the most informative (gossipy) letters come from her mother, who fills in a number of gaps simply by her attention to detail and names. Among the letters is a receipt from the Royal Oak school for Rebecca's monthly pay of $20.00, as well as a long poem (we do not know by whom).
For more details of Rebecca's life and a better understanding of this present collection of letters, we suggest picking up a copy of Beloved Sisters and Loving Friends. 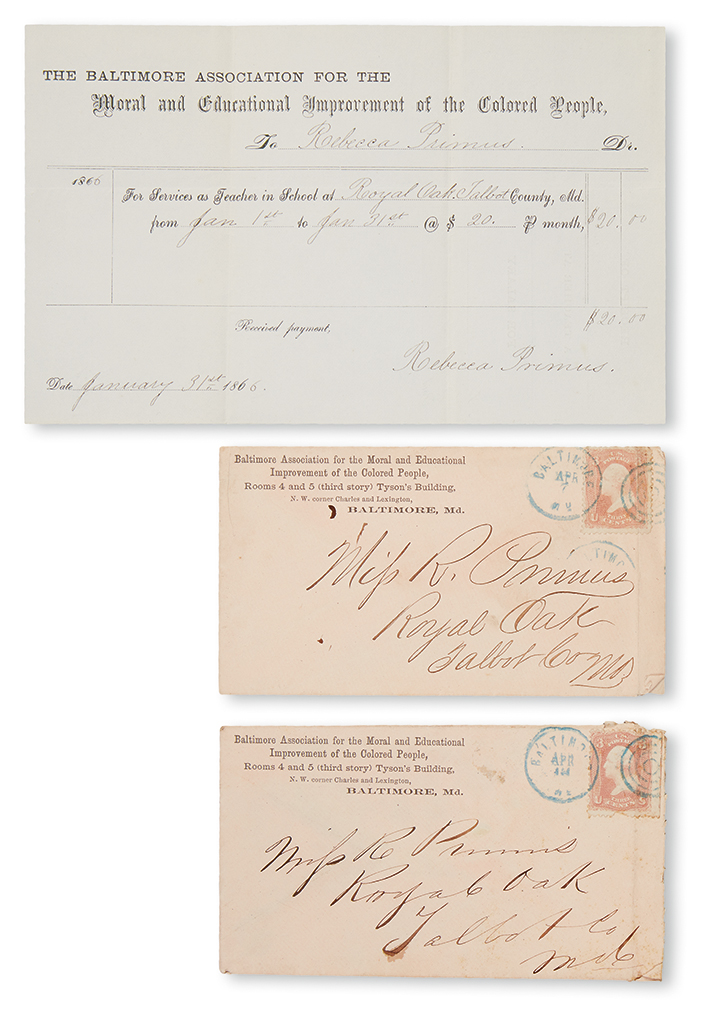