Charles Harris Wesley (1891-1987), noted historian and educator, graduated from Fisk University in 1911 and received a Master's degree from Yale University in 1913. In 1925, Wesley became the fourth African American to receive a PhD from Harvard University. Wesley was Dean of Liberal Arts and the Graduate School at Howard University until 1942, President of Wilberforce University from 1942 to 1947, and President of Central State College from 1947-1965. In 1965, he became the Director of Research and Publications for the Association for the Study of Negro Life and History and was Executive Director from 1965-1972, later becoming Executive Director Emeritus. In 1976, he became Director of the Afro-American Historical and Cultural Museum in Philadelphia. Wesley was the 14th and a five-term General President and National Historian for seven decades of Alpha Phi Alpha, the first intercollegiate Greek-letter fraternity established for African Americans. He wrote The History of Alpha Phi Alpha in 1929, and edited and enlarged many new editions. Wesley was also a member of Sigma Si Phi, the first of all Black Greek Letter Organizations (BGLO).
The Charles Harris Wesley Papers consist of over 30 boxes, three of them containing an Autobiography, with supporting material and correspondence (up to and including 1965); six boxes of general correspondence arranged chronologically, three boxes devoted to the Alpha Phi Alpha fraternity, two boxes of material relating to the Association for the Study of African-American Life and History, two boxes of United Supreme Council, several boxes relating to Central State and Wilberforce, two boxes of Sigma Psi Phi material, the Boule, and much more.
It is truly difficult to define Charles Harris Wesley. He was an historian, scholar, educator, counselor, ordained minister, accomplished pianist, and athlete. And like his good friend and frequent collaborator, Carter G. Woodson, a consummate writer. His curriculum vitae is extensive, and a list of his published work would cover over 30 pages. His allocates are numerous, including the Charles Harris Wesley Research Fund, administered by the Association of African American Life and History, the Dr. Charles Harris Wesley Award, administered by the University of Kentucky, with buildings in his honor. His first major publication was Negro Labor in the United States, 1850-1925: A Study in American Economic History (1927). Reviewing the latter, Carter G Woodson said it was "the only scientific treatment of Negro Labor in the United States." Wesley's history of the Alpha Phi Alpha fraternity is a definitive and highly sought after work. Other books by Wesley include: Richard Allen, Apostle of Freedom, Collapse of the Confederacy, The Negro in the Americas, Negro History Makers, Prince Hall, a Life and Legacy and nineteen other volumes published over a career spanning a half century.
NB: Potential buyers, please arrange for an appointment to examine this archive. The stepdaughter of the historian/educator has prepared a chronological list of "milestones" available to prospective bidders 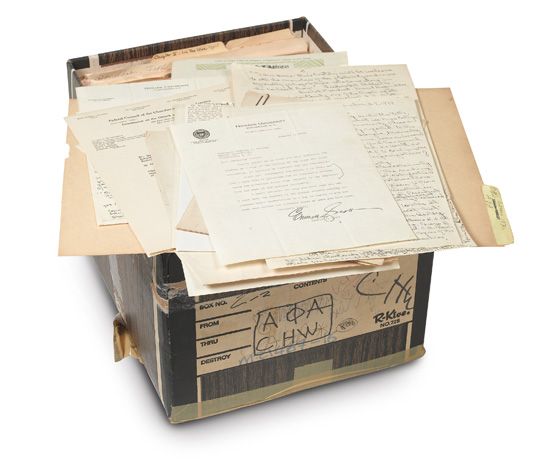