Julius "Nipsey" Russell (1918-2005) was a comedian who became well-known for his appearances on every talk show and game show from Jack Paar to Laugh-In to Johnny Carson to Conan O'Brien, in addition to his nightclub shows in Las Vegas and across the country. Though his performing career spanned over 70 years, he reached the peak of his fame during the 1960s and early 1970s. A graduate of the University of Cincinnati with a degree in English, his act was more intellectual than many comics of his era, and he was one of the first African-Americans to achieve widespread success in his field. He was best known for his witty short poems, and was an active supporter of many civil rights and charitable causes throughout his career.
Russell's correspondence file includes more than 120 letters received, many of them from other entertainers and business leaders. Most notable is a 5 April 1965 warm personal letter from Martin Luther King, Jr. (signed by a secretary), thanking Russell for performing at the culmination of the Selma to Montgomery march: "It was a long walk, but it is a symbol that those who have suffered deprivation and brutality can make their voices heard. . . . A whole nation has turned to a new course. I understand from my good friend Harry Belafonte that it was necessary for you to cancel a performance at the Latin Casino so that you could perform at the rally. . . . Your talent and good will were not only heard by those thousands of ears, but were felt in those thousands of hearts. . . . S.C.L.C. could not make it without friends like you, and neither could I. I hope our paths will cross again soon."
Among the other letters, Jackie Robinson co-signed an invitation to meet with Governor Nelson Rockefeller, 29 March 1961; Robert L. Johnson of Black Entertainment Television sent two letters in 1982 thanking Russell for appearances; and Amiri Baraka / LeRoi Jones wrote 4 times in 1970 regarding efforts to elect black councilmen in Newark, NJ ("Nipsey, brother, thank you thank you, you know this helps heavy! . . . I hope it's alright for us to send out a press release telling of your consummate hipness"). Other correspondents include Nelson Rockefeller, Julian Bond, Hank Aaron, Dick Clark (2), Wayne Newton, Aaron Spelling (thanking him for a Love Boat guest appearance), Don Rickles, Quincy Jones, and Red Skelton (2), who wrote a moving appreciation of his fellow comic's talents. Finally, Russell may well be the only person ever to receive a personal letter from both Martin Luther King and Playboy mogul Hugh Hefner.
Some of the other correspondence is more notable for its content. Victor Lowndes of the Playboy Club wrote in 1961 to invite Russell for a club appearance, and casually admitted to decades of institutional racism. Recalling that Dick Gregory had been booked into his club to fill a desperate emergency opening, "Gregory found himself playing to packed houses and, for the first time, people realized how ridiculous the prejudice against using Negro comics really is."
Hundreds of photographs are included, many of them professional 15x12 prints capturing his stage act from the 1970s, arranged in albums by performance (list available upon request). The most important single photograph is likely a moody 6 1/2 x 4 1/2-inch undated print of Russell holding a microphone on stage, bearing the inked stamp on verso of the celebrated African-American photographer Roy DeCarava. The collection also includes extensive notes on Russell's stage act, including volumes of jokes and banter 9 packets for songs he composed A file of more than 50 performance contracts spanning his career Printed ephemera from his performance as the Tin Man in the 1978 film The Wiz 4 small boxes of his stage outfits A thick file on his military service in World War Two, in which he reached the rank of First Lieutenant in the Medical Administrative Corps and much more. A show business treasure trove, with far more historical significance than the casual Laugh-In viewer might expect. 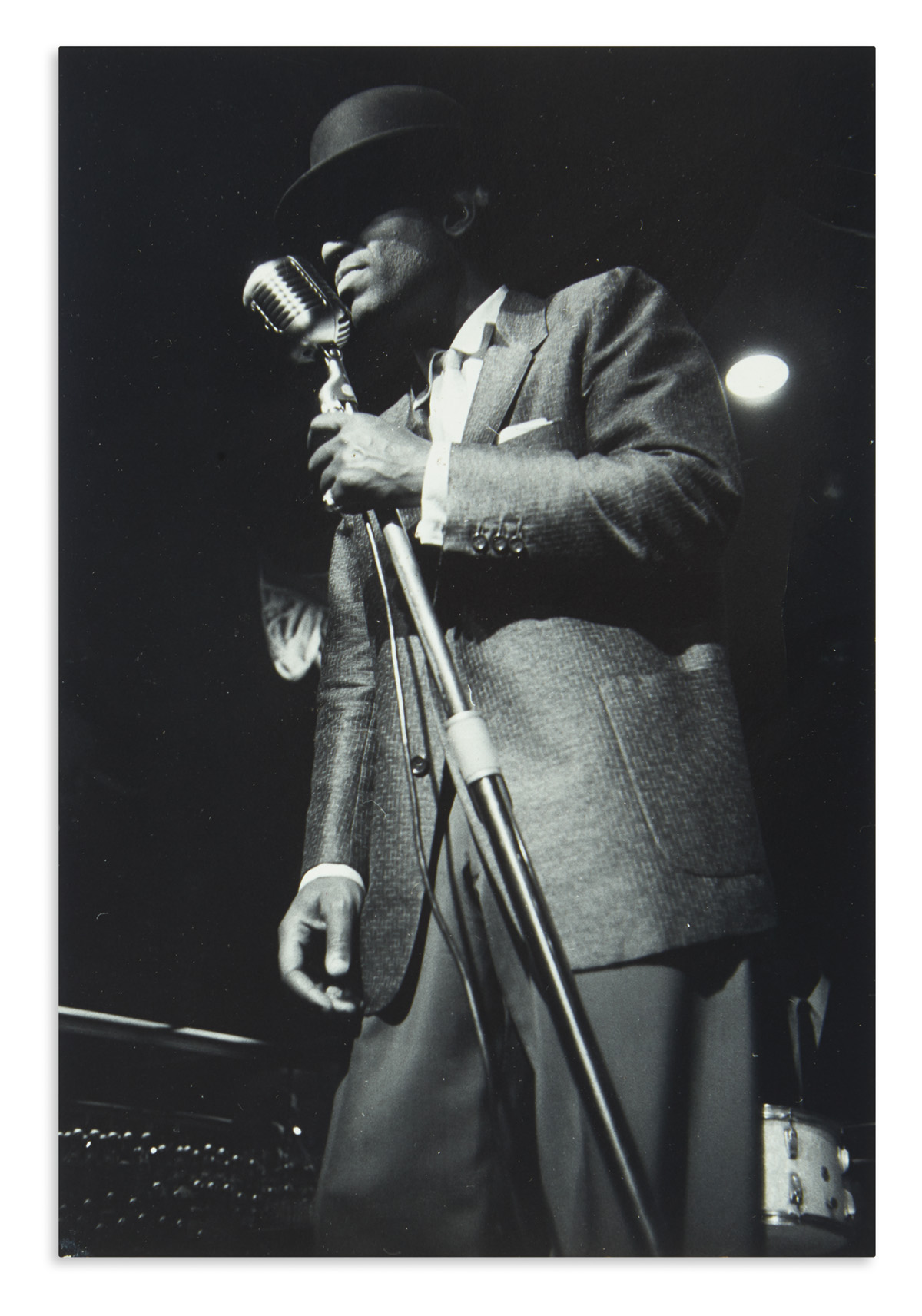 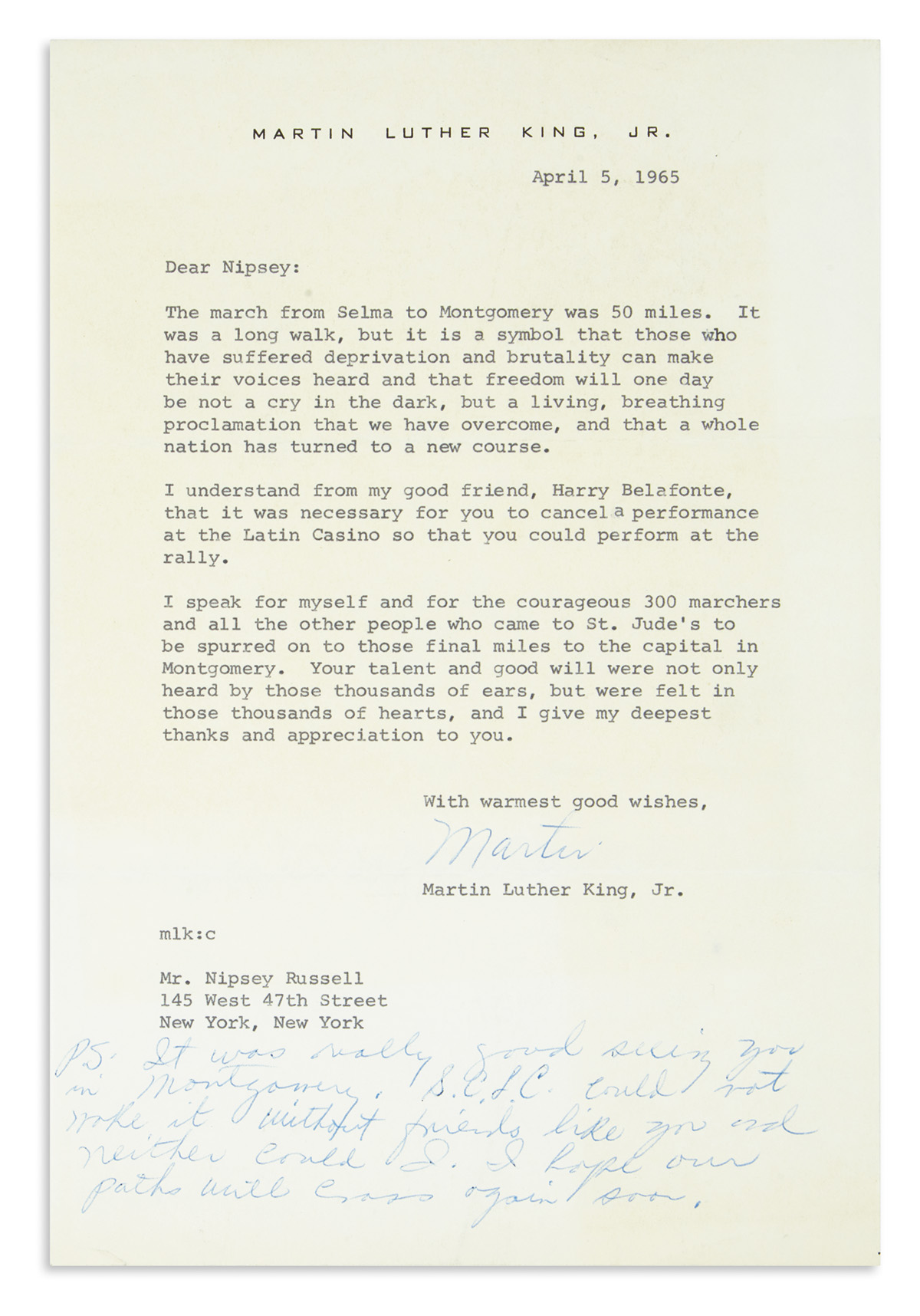