Katherine Dunham (1909-2006) was one of the most important American dancers of the 20th century. She wrote these letters starting in the late 1940s, mostly while she was touring internationally. The recipient was her friend Dorothy Gray (1922-1976) of New York and later North Hollywood, CA, who helped manage her stateside affairs.

Nine of the letters were written in mid-1948, while Dunham was performing in England. On 31 May 1948, shortly after arriving in London, she writes: "The show so far is called Caribbean Rhapsody, the sort of title I loathe. Darling, I've just complained. But I'm so very blue and sad & lonely." Four days later, the mood has changed: "After two days and two nights without any sleep, the entire show came through as a smash. Of course there's nothing like opening night, even tho I was on empirin, benzedrine and scotch and hardly knew what was happening. The audience went wild and now you can't get near the box office." She encloses a clipping of a glowing review. Several letters allude to difficulties with her husband and set designer John Pratt. The problems of running her famous New York dance school from overseas are a running theme, as she wrote on 3 August 1948: "I have absolutely no idea what goes on at the school. . . It's very hard to be so in the dark." She also offers an inside scoop on the smash hit London production, writing on 20 August 1948: "I have your wire about Reginald. Please tell him that I am trying to work out a deal here with the union to permit him to play in the pit, which is against regulation, but as our music is very special and our present pianist is having a nervous breakdown and leaving soon, it might be arranged."

The later letters are written from all over the world, including Australia, New Zealand, Haiti, San Francisco, and Japan. Australia receives poor reviews on 3 July 1956: "We are playing in a theatre which has to date, for at least forty years, had nothing but the cheapest kind of vaudeville, a compere telling dirty jokes, some acrobats, some tumblers, few semi-nudes and the dancing girls. . . . I should imagine that a year altogether would be possible here, but I turn pale at the thought." Those looking for celebrity references will find a few. Dunham was rumored to be in an affair with famed psychologist Erich Fromm. She wrote on 18 August 1948: "Enjoying the books greatly. Could you send Dr. Fromm's Escape from Freedom?" 30 June 1958 found her featured in Life Magazine: "Life worked me to death for two days with photographs & story. They're doing the 14 outstanding negroes in a big spread. Hard to believe they thought of me along with Ralph Bunche, Gen. Davis, etc. Made me very nervous." Despite her fame and critical success, keeping a large dance company on the road kept her finances in a precarious state. She wrote on 5 October 1961: "I cabled both [former student Eartha] Kitt and Julie in desperation last week. Negative from Kitt's manager, no answer at all from the Belafontes." Dunham's work as an author and anthropologist is also noted, though in less detail than the nuts and bolts of her dance tours.

These letters put Dunham's personality on vivid display: razor-sharp intelligence, deep and genuine concern for her friends, commitment to her art, and a flair for the dramatic. Her letters are almost uniformly entertaining. We know of no other Dunham archives which have appeared at auction, and yet here are two unrelated lots from different consignors in the same sale (see above). 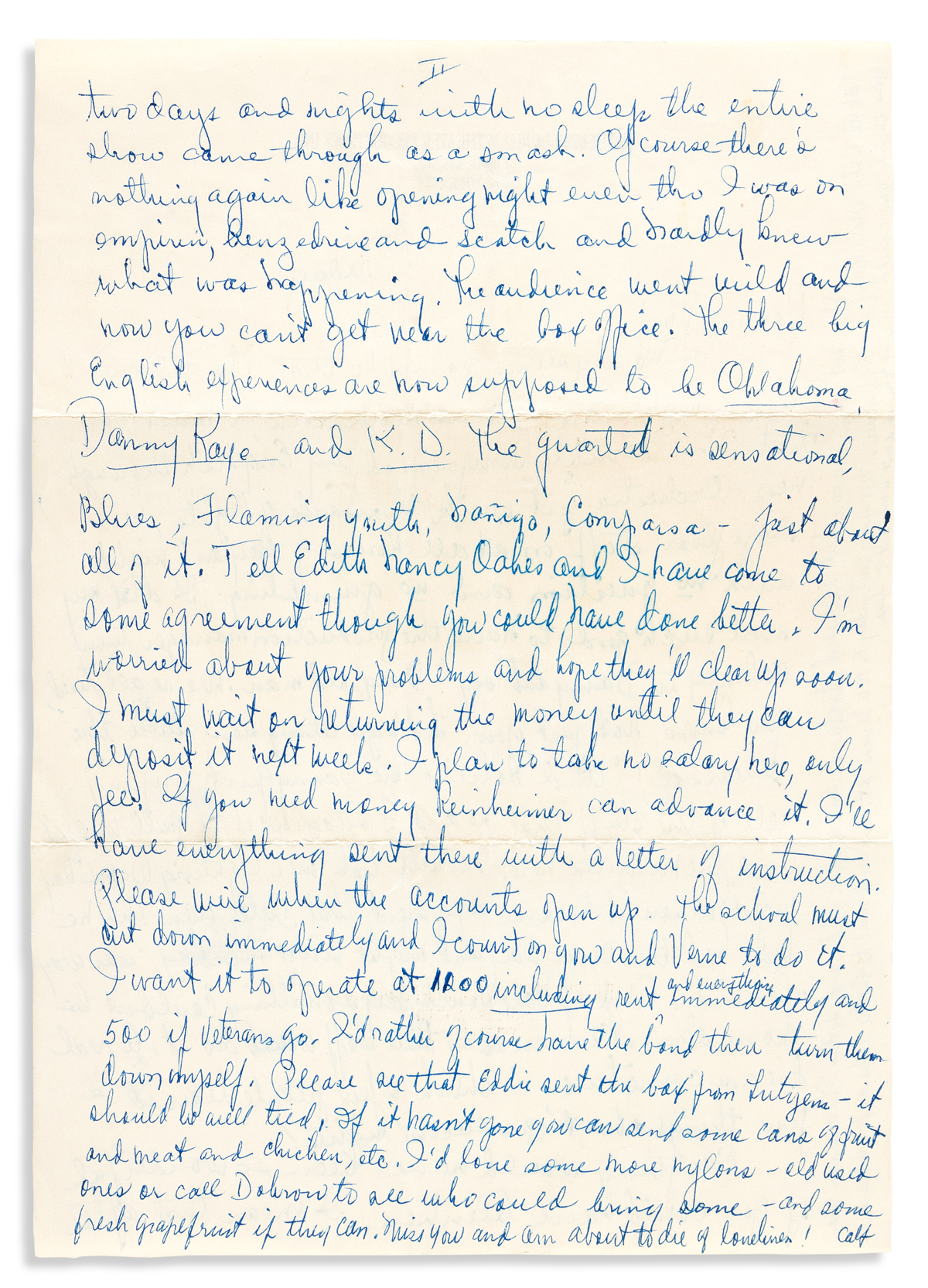