A collection of original film of extraordinary historical importance, all of which has been professionally conserved and transferred digitally. It is offered here with a digital dvd copy. a sample reel can be provided to serious bidders.
In late 2005, Currie Ballard, then resident historian at Langston University in Oklahoma, was offered 29 canisters of 16 mm film. The film was shot between 1925 and 1928 by Reverend Solomon S. Jones, a black Baptist minister from Guthrie, Oklahoma. The antique dealer who was selling the film had not tried to view it, and had no idea of what specifically was on the reels. The purchase was somewhat of a gamble. The film was 75 years old. There was no way of knowing precisely what was on the film and it was unknown whether any of it was useable. Fortunately, almost all the film was able to be conserved, and it was transferred to a DVD for viewing.
The first blacks to arrive in Oklahoma came in 1835 and 1836. They were the slaves of members of the Five Civilized Nations, the Native Americans forced to leave their lands in the South and make the long march West, known as "The Trail of Tears." In the aftermath of the Civil War, these now ex-slaves were joined by southern blacks. The Cherokee, Choctaw and others were forced to give their ex-slaves what was deemed to be "unused" land. These ex-slaves and others that came for the great "Land Run" of 1889 built up the black townships that are seen in this rare footage.
The filmmaker was Reverend Solomon Sir Jones (1869-1936), born in Tennessee, the child of ex-slaves. Jones grew up in the South during Reconstruction and migrated to Oklahoma around the time of the first big land run in 1889. A Baptist minister, Jones was responsible for the building and pastoring of 15 churches, the first at Guthrie. He was head of the Boyd Faction of Negro Baptists in America. "Rev. Jones, unlike many ministers, believed in ''leading'' his people in all activities wherein they were concerned. He accumulated considerable property. He was active in all movements, looking to the good of his race, politically and spiritually." (from his obituary in the Black Dispatch, Oklahoma City, January 7, 1937). In addition to his church activities, Jones was a successful businessman and local entrepreneur.
Jones left no written explanation why he began filming life in black Oklahoma. In 1925 he acquired a 16mm camera, and began an extraordinary record of the people of the eleven oil-rich black townships at work, at play and in church. And Jones didn''t stop there. In 1926 he took his camera and traveled across the United States, visiting Madam C. J. Walker''s factory and offices in Indianapolis; then on to New York City, and to Europe and the Holy Land. By 1928, Reverend Jones had shot at least 29 canisters of film.
They are a veritable time capsule from 1925 to 1928, some of the most vibrant years of the twentieth century. Footage includes Mr. and Mrs. L. E. Ragsdale and their 1000 barrel a day "gusher" oil well; T.J. Elliot, businessman who had the entire Stetson franchise for North Eastern Oklahoma (that''s a lot of cowboy hats!); footage of Robert Russa Moton, the principal of Tuskegee after Booker T. Washington''s passing, Madam C. J. Walker''s new $500,000 building in Indianapolis; the C. S. Pyles International Transcontinental footrace from Los Angeles to New York and so much more. Outside the United States, there''s footage of Great Britain, Europe, and the Holy Land. While some of this is "familiar ground," it is new from the standpoint of an African-American filmmaker in the 1920s.
We know of no comparable contemporary film record of this size and scope that shows what life was like for working class, middle class and wealthy, African Americans during this period of economic prosperity in America. Reverend Jones identified each filmed sequence on a "slate" in the same way any professional filmmaker might; a log, identifying each sequence was made when the film was restored. 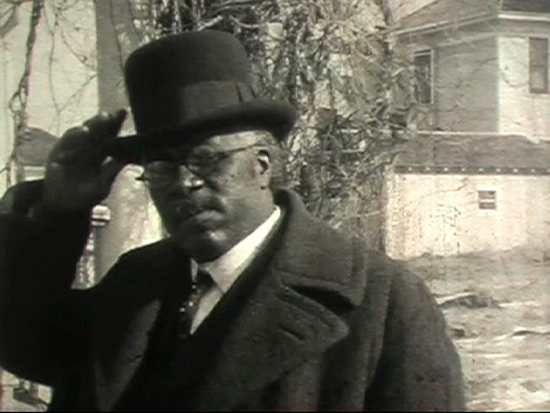