an original manuscript, assembled and edited by amy jacques garvey (1895-1978), the radical leader's second wife and amanuensis. It was Amy Jacques who had compiled and edited the first edition of Garvey's Philosophy and Opinions (1923). In her preface to the published work, Amy Jacques states that her purpose was not so much to issue a second edition per se, but rather to record the more recent speeches, articles and aphorisms by her husband. She adds, "In Chapter 1 of this volume, I have endeavored to place before my readers gems of expression convincing in their truths." The manuscript is really quite a mixture of speeches, aphorisms, and even an original copy of a long telegram dated November 11, 1922 addressed to the President and Members of the International Conference on Disarmament in Washington. The first identifiable chapter in the manuscript is titled "The Value of Minerals," and discusses the overnight millionaires in Oklahoma and Texas, black farmers who just happened to find oil bubbling beneath their feet. The next chapter in the manuscript is titled "Native Africans Exploited by White Men." There follows a speech, cobbled together with clippings from the Negro World with some ink notes and titled "Christ the Greatest Reformer," dated December 24, 1922. Interspersed with the clippings are numerous notes, quite possibly in Marcus Garvey's hand. The next large piece in the manuscript is titled "Who and What is the Negro," January 16, 1923. Heading a section titled "Black Africa," there is an ink paragraph which looks very much like Marcus Garvey's hand, as might be numerous small corrections throughout: "There is no white supremacy beyond the power and the strength of the white man to hold himself against others. The supremacy of any race is not permanent; it is a thing only of the time in which the race finds itself to be powerful, hence (and this is continued on the next page in pencil) "out of the unsettled state and condition of the world will come such revolutions that will give each and every race that is oppressed the opportunity to march forward." There follows a six page typed chapter headed "Racial Reforms and Reformers," which includes a number of clippings from the pages of the Negro World. Then comes a seven page typed version (quite possibly the original, with some corrections) of a notoriously controversial piece: "An Appeal to the Soul of White America" dated October 6, 1923, first appeared in the pages of The Negro World. The next piece in the manuscript (a Boston speech) is titled "Will the Negro Succumb to the White Man's Plan of Economic Starvation." The last long piece, before a series of aphorisms, is "Statement on Release, Pending Appeal," dated September 10, 1923." Garvey was indeed paroled but deported to Jamaica, and from there to England. There is a version of Garvey's first speech after release (September 13) and then the remainder of the volume is made up of aphorisms, typed, manuscript and clipped pieces from the Negro World. As far as we were able to determine, there is no other such manuscript known, for either the first or second edition of the Philosophy and Opinions. 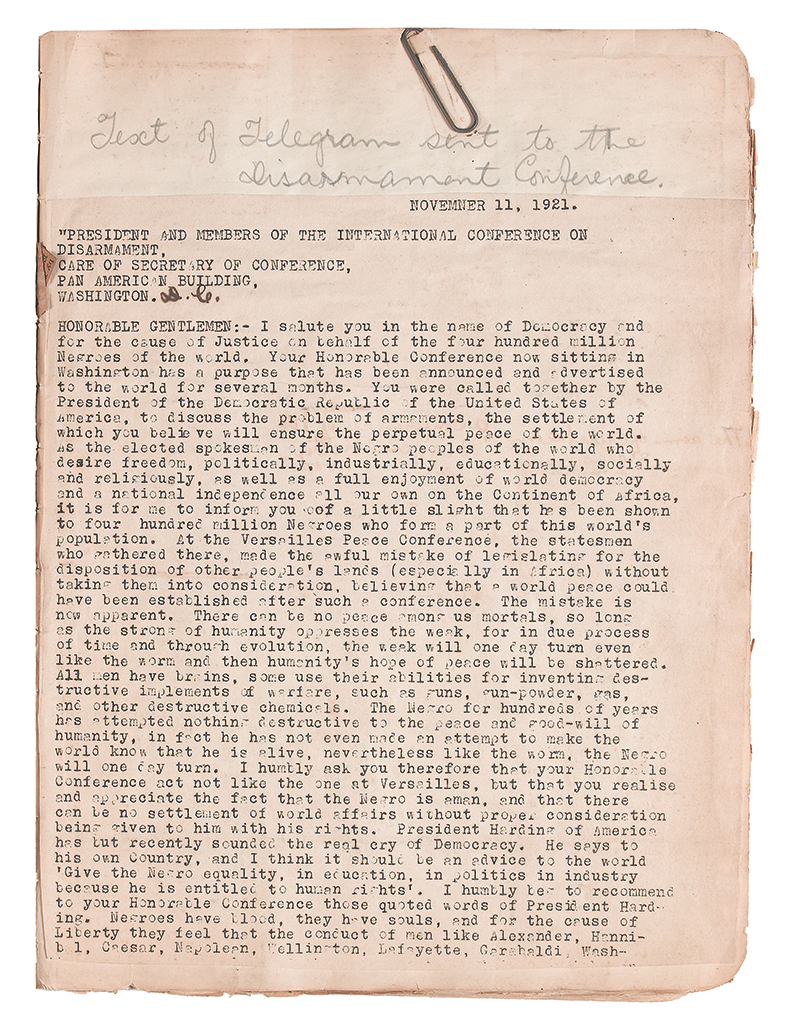