The Haitian revolutionary hero Toussaint Louverture was captured and brought to Fort de Joux prison in 1802, located in one of the coldest and most remote mountainous regions of France. His health rapidly declined, and he died in prison in April 1803. The specifics of his death have attracted controversy ever since. Offered here are early copies of records from the French Department of Doubs where the death occurred; the dates are written in the French Republican calendar. The copies may have been done by a British researcher--one of the sheets bears an early Britannia watermark. Included are:
Document 1. "Extrait des minutes du Greffe de la justice de paix du Canton de Pontarlier," 17 á 19 Germinal an onze (7 and 9 April 1803). A report by Judge Pierre Xavier Regnauld (former mayor of Pontarlier) on the death of Toussaint. On 17 Germinal Commander Amyot went to the cell to deliver books for the prisoner, and found him motionless in a chair by the fire. a doctor and surgeon were summoned who pronounced him dead. An autopsy was performed the next day. All of the prisoner's possessions were gathered and locked in a trunk, and sealed. The text of the autopsy is appended, declaring the cause of death to be apoplexy and "pleureperipneumonia." 4 pages, 8 3/4 x 7 inches, on one folding sheet of laid paper with a small olive wreath as a watermark.
Document 2. Letter from Acting Prefect Pajot to the Prefect of the Department of Doubs, 17 Germinal, an 11 (7 April 1803). In partial translation, "I have now arrived at Fort Joux to verify . . . the death of Toussaint Louverture which happened this morning. . . . I have decided to inform you of this incident, even more unexpected as Toussaint himself yesterday explained to the Governor that he felt better than usual." Some later notes in pencil are added below, including one calling Fort de Joux "la Siberie de la France." The paper was lined in pencil, apparently to aid in making a tidy transcript. One page, 9 3/4 x 7 3/4 inches; the watermark reads "L.S."
Document 3. Letter from Police Commissioner Micaud to the Prefect of the Department of Doubs, 1 Floréal, an 11 (20 April 1803). In partial translation: "I have sent the oral testimony relating to the autopsy of Toussaint Louverture. . . . The deceased's belongings have not yet been sold, because his belongings and those which had been provided by the state have been sealed by the Justice of the Peace. I will speak to the justice to execute the sale." One page, 10 x 7 3/4 inches, also lined in pencil; the watermark is a seated Britannia with sword and shield within an oval, topped by a crown, in a style used in British paper from at least 1750 to 1810.
Document 4 is untitled; it is an inventory of the contents of Toussaint's trunk, undertaken on 9 Floréal an onze (28 April 1803) and recorded the next day. It lists boots, handkerchiefs,and more, distinguishing between what Toussaint brought with him to prison and what was provided to him there. It concludes "signé Gloriot" (signed, Gloriot). 3 pages, 8 3/4 x 7, on one folding sheet; the watermark is a small decorative "A" or "M".
Documents 1, 3 and 4 were published in 1929 by Nemours, "Histoire de la Captivité et de la Mort de Toussaint-Louverture," pages 267-268, 273-274, citing the archives of the Department of Doubs. Rough translations of all 4 documents from French into English are available by request.
with--a small engraving of Toussaint by Bonatti, removed from a book. 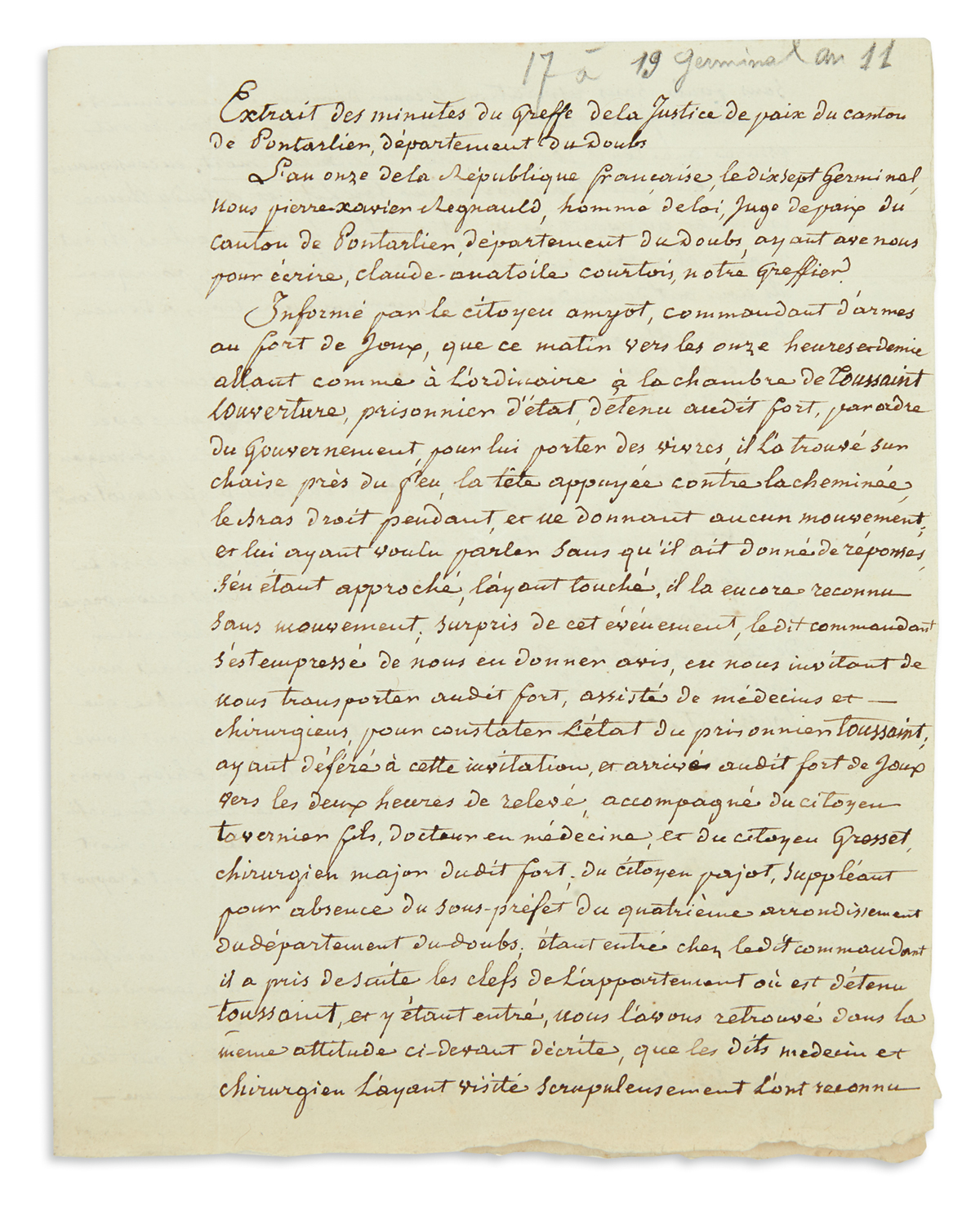