This large and historically significant archive relates to the 1876 election, although the main focus is the South Carolina governor's race rather than the Hayes-Tilden contest at the top of the ticket. As the Reconstruction period drew to a close, former Confederates grew increasingly anxious to regain control of their state and local governments. The 1876 election was marked by a variety of clashes between Southern Democrats and freed slaves. Although the first incarnation of the Ku Klux Klan had been largely broken up by federal troops, they were replaced by informal "rifle clubs" which intimidated their opponents. The low point was a week of rioting in Ellenton from 15 to 21 September, in which up to 100 African-Americans were killed by the rifle clubs, and two white men also perished; there was apparently violence on many sides. The riots brought federal troops from the Department of the South under the command of General Thomas Ruger, who came in from Atlanta. This archive documents the military government's daunting task: ensuring a fair election in South Carolina. It consists of reports and correspondence addressed mainly to Ruger and his adjutants, including contemporary copies and notes made by his staff.
The earliest document in the collection is also the most dramatic: a 20 September letter to General Ruger from Lewis Cass Carpenter, the state's Internal Revenue collector, reporting that a Republican legislator named Coker had yesterday been "deliberately shot down in cold blood, not 50 yards from the depot": "Coker, who is a colored man . . . was waited upon by white Democrats, taken to Ellenton some distance from his home, and there in the presence of this witness, shot to death." Two other bodies were seen lying on the side of a road, and "it is reported in Augusta that 100 'niggers' have been slain." Carpenter pleads: "Is there no way to stop this slaughter of innocent men? Must these men be shot down like dogs, with no power to stay the hand of the assassins? . . . Hundreds of men should be slain for their opinion's sake, or on account of the color of their skin?" A later memorandum apparently in Ruger's hand summarizes his actions: "Ellerton Riots. . . . I could not order troops to take independent action . . . as to riot that might be only breach of peace of the state, but would order troops to the scene of disturbance."
Once stationed in South Carolina in mid-October, Ruger found himself bombarded with requests for military protection across the state. On 11 October, a captain stationed in Edgefield described "a body of 700 mounted men, organized in clubs, officered & moving by command & armed with revolvers. . . . If a conflict occurs between the U.S. troops and the rifle clubs, the force under my command would be inadequate." Some freedmen, under threat of violence or just frustrated with the broken promises of Reconstruction, switched their allegiance to the Democrats and faced danger from their own neighbors. Included is a petition to the Democratic Executive Committee from "We colored Democrats of James Island," hoping to hold a public meeting : "We are living among people who are opposed to us, and the more hostile to us because being colored men, we are Democrats. . . . Protect us in holding our meeting, as otherwise we will be assaulted and beaten." It is signed by 15 men, mostly by mark. A white woman named Sarah Marshall from rural Adams Run requested a military guard for her town on 21 October, based on rumors that angry black voters were forming their own militias to "burn out this entire section & murder every white person they can lay hands on" if thwarted in the election. On 31 October, dozens of whites from John's Island petitioned for protection on Election Day: "We fear riot and danger to our women and children . . . We are prohibited by the Proclamation from protecting ourselves." One man from Ashapoo reported 4 days before the election that African-American workers had gone on strike to prevent any coercion by Democrats: "Twenty men came here with whips and clubs and whipped and beat nearly every hand they found at work. . . . They said that no work should be done until after the election." A long list of the state's counties is annotated with a summary of the troops stationed at each polling place. The election was held on 7 November. Both the Republican incumbent governor and his Democratic challenger declared victory. Two days later, Charleston's mayor Gorge Cunningham sent a telegraph to the governor (included here): "The rifle clubs have congregated with their arms at their armories. Until they are compelled to disperse at once a serious riot may follow. Great excitement prevails & all the stores are being closed."
Among the notable correspondents included in this collection are former Union general Henry Jackson Hunt, reporting at length on the election in Charleston; and South Carolina's Reconstruction Governor Daniel H. Chamberlain, who wrote 23 letters to Ruger, mostly requesting military aid to specific locations. Three days after the election, the governor warned of a planned attack: "The armory contains a large quantity of ammunition and a few hundred guns, a fact which makes it an object of regard for both sides." The Confederate general George Washington Custis Lee wrote twice from Virginia, interceding on behalf of a frightened widow in Aiken, SC. On 26 November, Secretary of War D.J. Cameron wrote with the text of an order from President Grant, naming Chamberlain the governor until another was legally inaugurated; it concludes with a signed postscript by General William T. Sherman. Contemporary manuscript copies of some letters and telegrams are also included, including copies of orders from General William T. Sherman to Ruger. The one printed document in this lot is a copy of the army's General Orders No. 96 issued on Election Day.
The disputed governorship lasted for months. Once the Republican president Rutherford B. Hayes was finally installed in office, he announced the withdrawal of federal troops from South Carolina, essentially ending Reconstruction and conceding the state to Democratic control. This archive essentially documents the violent, ugly defeat of Reconstruction and democratic ideals in excruciating detail. 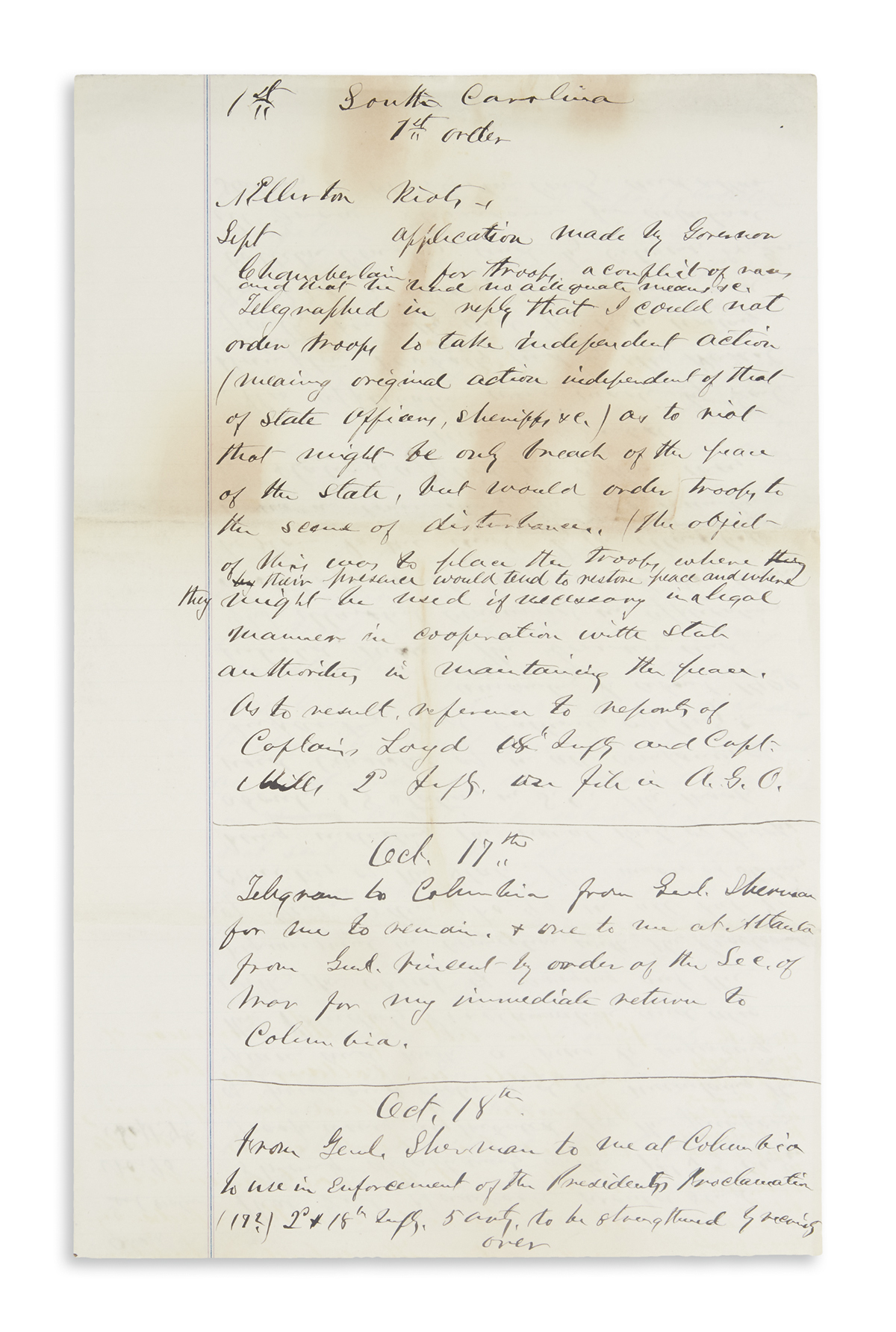