Unsold
Estimate: $ 40,000 - $ 60,000
IN A BEAUTIFUL LEATHER POUCH (ISLAM.) TIMBUKTU SCHOOL, MALI. A nearly complete handwritten copy of the Holy Qur'an from the Infa Yattara Family Library in Timbuktu. The 212 folio leaves of the manuscript are held loose. 424 pages. 7 3/4 x 4 1/2 inches, in its original blind-stamped leather case, peculiar to texts like this one; some leaves chipped. Comprising 90 surahs, beginning with surah 3 and lacking the last 8 surahs. should be seen. Timbuktu (Mali), circa 16th to 17th century
Set Alert for Similar Items

an exceedingly rare manuscript qur'an from the yattara family library, one of timbuktu's original founding families. The widely held theory that sub-Saharan Africans had no written language, and therefore no recorded history was a perfect rationale for slavery. For a couple of centuries, theologians and apologists for the slave-trade exploited this argument. However, abolitionist Theodore Dwight Weld tracked down and identified a number of literate slaves. The most important of these was the North Carolinian slave Omar ibn Said, a Fullah from Senegal whose manuscript narrative (in Arabic) was sold in these rooms in 1996.
Timbuktu was a thriving culture centered in what is today's Mali, having its beginnings around the 10th century. From there, Moslem traders carried Islam and a written culture outward into Senegal and West Africa. Long before the existence of Oxford or Cambridge, the scholars of the University of Sankore and other cultural centers were writing and copying thousands of manuscripts on science, astronomy, astrology, theology, mathematics, Islamic jurisprudence and common law. In Timbuktu, African merchants from Djenne (in Mali) traded with the Kel Tamasheq nomads and the Arabs from the north in markets that were legendary for the variety of their goods. The prosperity of the city attracted Africans from the south and Arab scholars from the north. This unique combination of scholarship and business acumen were the cornerstones that made Timbuktu a city of wealth and knowledge. Books were the refined work of black and Arab scholars in the city's libraries. The writing and copying of the holy book of the Qur'an was one of the most important jobs of Timbuktu's scribes. The Qur'an offered here is an excellent example, with its original leather pouch binding.
Provenance, and a word about the binding: The Qur'an being offered here comes from the Infa Yattara family library in Timbuktu. All of the necessary paperwork, attesting to both the authenticity of the manuscript as well as the certificates allowing the manuscript to be exported from Mali is present. The 212 folio leaves of the manuscript are held loose, in their original leather binding, as is traditional. The binding bears an incised design and is more like a pouch than the traditional book binding in the Anglo-European tradition.
The script and format of this Qur'an is West African. Black and red inks are used, the red for the vocalization marks, probably from cochineal dye. The Arabic script shows typical West African / North African features, including a subscript dot on the f'a, superscript dot on the qaf, etc. Marginal notes divide the manuscript into hizbs (sections of 1/60th of the Qur'an), and these are further divided into thumn (eighths) in marginal notes. Several ornate 'panels' occur at the beginnings of several surahs, but most lack such 'panels.' The paper is watermarked with a crown, or fleur-de-lis, which would suggest a date for the manuscript of the 16th to 17th century. The manuscript comes from the private library of the Infa Yattara family of Timbuktu and its features are consistent with provenance from that region. Timbuktu was the major center of Islamic studies in that period, so it is very likely that the manuscript was originally copied there. 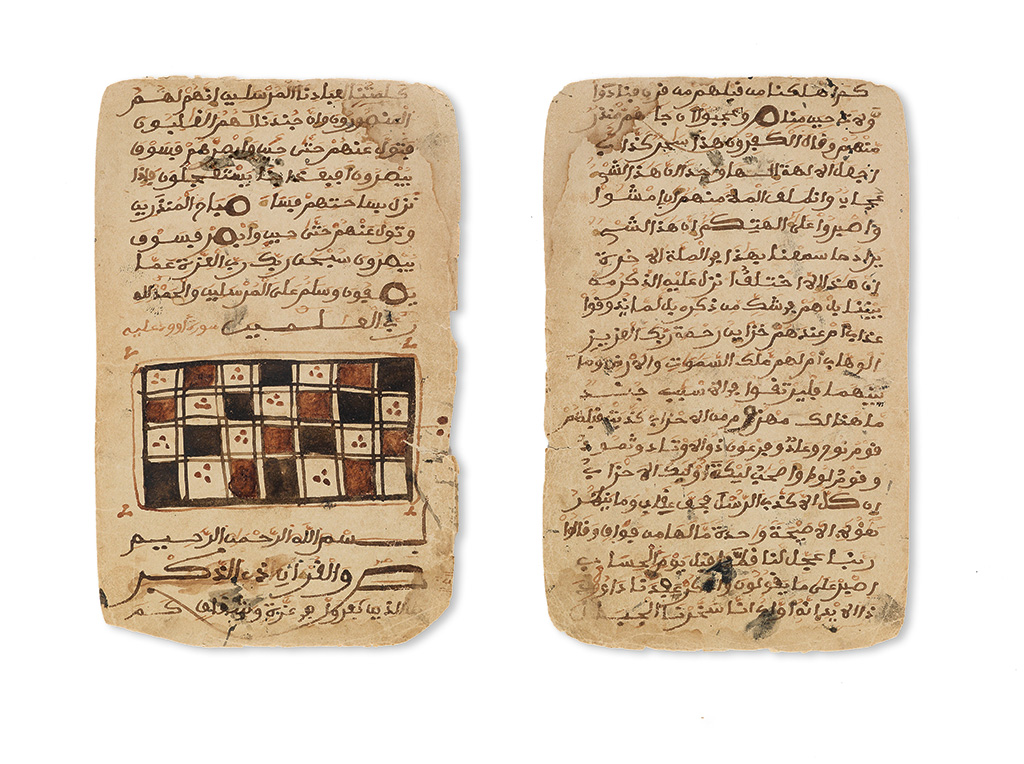