Josiah William Beckley (1841-1899) was in 1868 appointed town surveyor of Brierley Hill, Staffordshire, England, and later that year celebrated with a trip to America to visit siblings who had emigrated to Kansas. This first volume mostly records his trip west by ship, train, and stagecoach, with descriptions of New York, Pittsburgh, Steubenville, OH, and Indianapolis in late September, and then Kansas City on 7 October.
The second volume is largely devoted to his eventful time in Kansas in October 1868. In Wyandotte, KS, a suburb of Kansas City, he saw an election rally, apparently for Ulysses Grant: 'In the evening witnessed a political torchlight procession composed of more than 1000 men, all having in his hand a lamp on the head of a staff lighted up with petroleum' (5 October). He attended a Wyandotte court session and heard a description of a recent lynching: 'Injury having been sustained from two supposed natives the inhabitants allowed their feelings to be excited and either for gratification or feeling of predjudice(?) they dragged away the two men & in defiance of the law & its officers and hanged them on a tree growing on a hill a few yards in front of the court house.' They were later proven innocent but no steps were taken to prosecute the mob (6 October).
The highlight of the trip was an excursion which departed on 20 October, billed as 'a buffalo hunt on the immense plains of Kansas & Colourado where the Indian now roams, defiantly bidding civilization to advance,' and described over 19 pages. At Fort Riley 'I notice for the first time coloured troops. A sergeant mounted on a mule had charge of about twenty soldiers escorting a baggage wagon to the depot.' He later notes that 'from Fort Hays & all through this region military posts of colored troops are established generally at stations where the train halts to take on wood & water for the protection . . . against outrages of the Indians' (page 42). In Sheridan, KS they hoped to get a view of the Rocky Mountains from a nearby hill, but 'passing a coloured picket he told us that the Indians were seen scouting round the hills the day previous and . . . the troops were expecting an attack' (pages 49-50). The group witnessed an Indian scalp on public display in Junction City, alleged to have been taken by notorious tavern-keeper Jim Curry (page 38).
The crowd descended into chaos when their train encounters its first herd—of prairie dogs: 'The firing from the car windows and platforms is incessant. A gentleman sitting opposite to me while in the act of lifting his cocked rifle to blaze away accidentally goes off, the ball tears away part of his coat sleeve and passes close to my precious head' (page 41). West of Fort Hays they encountered 'herds of buffalo surrounding us on all sides, the immense wavy plains darkened everywhere with them.' The buffalo scatter upon the first gunshots, and the excursionists leave the train to pursue on foot. Though most stampede quickly to safety, 'some get influenced by bold fancies & lose precious time by making zigzags. As they do, they come in range of the deadly rifles which blaze at them without remorse or mercy' (page 43). Coming upon one fallen buffalo, 'I stooped with my open pen knife and unmercifully began scalping his sides to bring a trophy home. . . . The hind quarters were taken away by two proud warriors who had made the charge with bowie knife. They walked off with them on their shoulders. No thought was paid to the blood which trickled down & covered their backs' (pages 47-48). While the excursionists slept in Sheridan's only hotel, the locals who were 'in the tavern embibing liquor & playing cards, had quarreled & turned into the open air to settle their dispute. Seven shots were fired & one was mortally shot through the heart. I also learnt at daybreak that another man had his head beaten so badly with a revolver that all hope for his recovery was given up' (page 52).
Beckley enlivened the diary with 5 full-page drawings, including a view of the Missouri River with Kansas City in the distance (5 October, illustrated). He was obviously fascinated with American life, but records show that he returned to England and served as surveyor at Brierley Hill until his death in 1899. 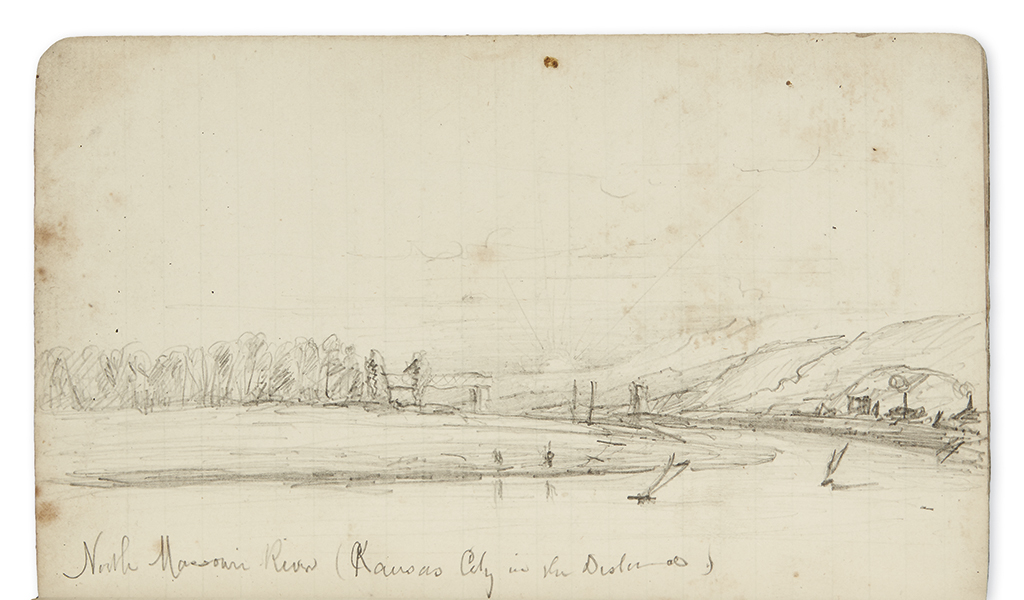