Carl Sandburg (1878-1967) published the first two volumes of his Lincoln biography in 1926. He released the final four volumes, titled "Abraham Lincoln: The War Years," in 1939. The effort won him a Pulitzer Prize. Offered here are two of Sandburg's massive partial typescript drafts of "The War Years," submitted for the review of his close friend, the Lincoln scholar who would be acknowledged first on the book's dedication page: "To the attorney-at-law, collector of documents and source items in history, seeker of basic human lore, Oliver R. Barrett."
The earlier of the two drafts, 1877 pages in length, was sent to Barrett in installments from 1930 to 1933. It covers events through April 1864, and corresponds to the first 44 chapters of the 76-chapter published work. The chapters are often held together with paper clips, sometimes with notes (apparently by Barrett) noting the chapter and date of receipt. Included are 4 signed manuscript notes by Sandburg. The longest is a note clipped to page 122: "Oliver: I believe chapters are consecutive, I mean, in proper sequence. This is 1st copy & may be changed anywhere & all kinds of ways. The mss is confidential, sub rosa, abracadabra, and like New Eng. soil needs both prayer and manure. Carl." Other notes appear on pages 1, 1312, and 1454. A folder of 52 revision sheets from this draft includes 2 additional signed Sandburg notes.
The second draft is quite close to the final text as published, though differences can be spotted. It begins with a 1304-page typescript (chapters 1-41, corresponding to chapters 1-19 of the published work, covering events through the summer of 1863). A note by Sandburg can be found on the first page dated November 1934. Several other typescripts totaling 638 pages appear to be later parts of this second draft, though the pagination is not followed through. On the final page of the final chapter is a note in Sandburg's hand: "Oliver, this on Sept 10 1938 is the beginning of the end of a long journey, and I like to think you never wavered in faith that somehow it would come along to a decently wrought end. Carl Sandburg."
Also included in this lot are 319 pages of Sandburg's typescript notes in reporter's abbreviated shorthand. They are prefaced with a note by Sandburg on an index card: "Dear Oliver, I have reached the four bottom categories on the other side, am about 40,000 words in the red--or black; have held it to over 95% fact and less than 5% 'writing' as such. . . . Carl." On verso of the card is a list of 14 abbreviations, headed "Portrait Chapter '63." An undated Autograph Note Signed reads "Oliver, Have just looked it up. The Kellogg letter is in, big as the side of a barn. . . . Green grow the lilacs. Carl." Finally, the collection includes an early manuscript outline of the work as a whole on one page, with note: "ORB: Something like this, maybe, maybe not. C.S."
Taken together, these early drafts are important to the genesis of an important landmark in Lincoln studies. "Probably the most prodigious and monumental single-handed production in American historical literature. . . . The manuscript was so long that the author began to wonder if anyone would wade through it"--Callahan, Carl Sandburg: His Life and Works, page 157. Provenance: Hanzel Galleries auction, 27 January 1976, lot 14 (catalogue included). The consignor recalls purchasing these typescripts from Chicago booksellers Hamill & Barker. A more detailed description is available upon request. 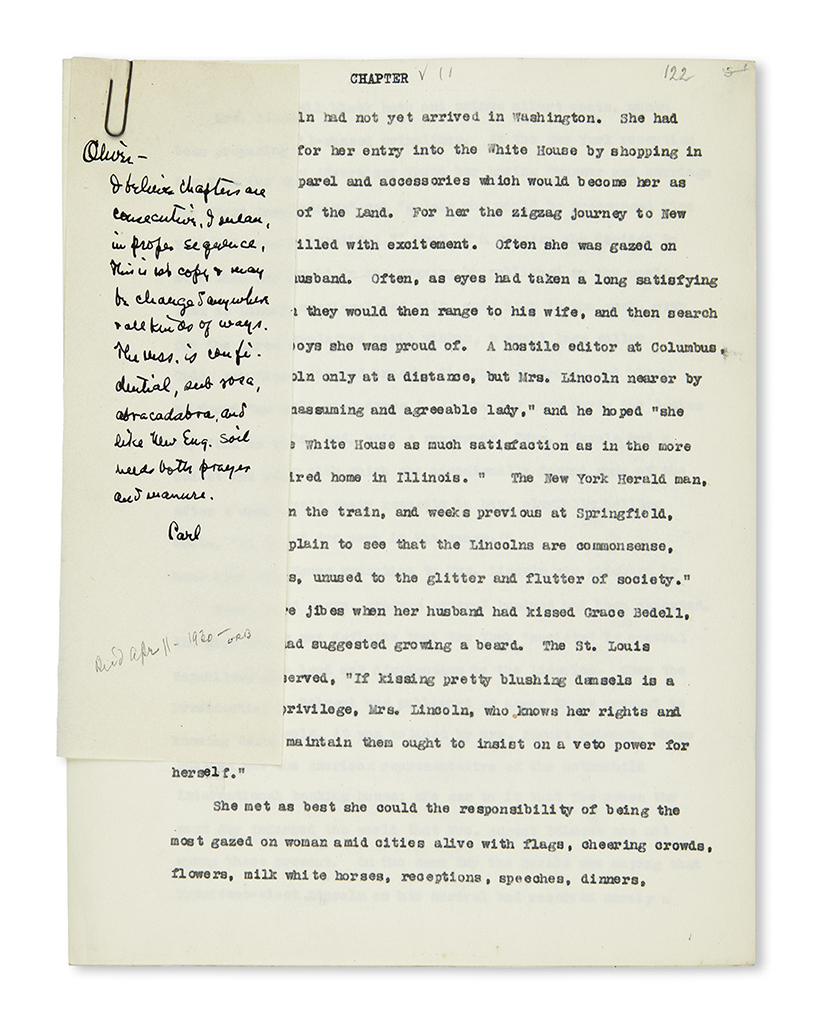