An apparently unpublished and nearly lost radio play by Langston Hughes. Hughes rarely wrote for radio, but was commissioned in 1943 to write a "ballad opera" in support of the war for the BBC. The resulting script was produced in New York in February 1944 with an all-star cast, including Paul Robeson as narrator and "Voice of God." Ethel Waters and Canada Lee played the leads, and the music was a collaboration including Josh White, Sonny Terry, Brownie McGhee, and Alan Lomax. It was aired only in Great Britain and its colonies; because of rights issues, it was never heard in the United States. The only surviving recording was unearthed at the Library of Congress in 2010.
The script, so far as we know, was never published. Offered here is a contemporary example of the script, clearly dating from circa 1944. Comparing it with the recorded performance, we can see numerous differences. This script is a draft which later went through revisions, although it bears no annotations. Some of the changes are minor, and may be simple improvisations by the actors. For example, the script reads "take that pipe out of your mouth, turn down that radio, and come here." Ethel Waters skipped the phrase "turn down that radio" in the recording at 1:56. Where the script reads "He's your baby", at 2:12, she adds a word: "Remember, he's your baby."
However, the dialogue where Johnny reveals that he is going to the front is completely reworked. The script reads "After I make that clothes line, that kiss is left to come back to. You want me to go to war, Sally, don't you?" "What woman ever wants her man to leave her Johnny?" "You'll be alright, here with Grandpa and the kids. For a man like me, there ain't no staying home now. I gotta go. Hand me the end of that rope." The recording from 2:30 to 3:01 has several completely new lines in its place.
We know of one other extant copy of the script, among the Alan Lomax Papers at the Library of Congress--a similar-looking mimeograph, but apparently the final draft as performed. See Hilmes, "Missing from History: Langston Hughes' The Man Who Went To War" on the University of Wisconsin's Department of Communication Arts blog, 12 June 2015. Provenance: said to be acquired from the Langston Hughes estate, sold by Frank Armstrong of Harlem to Thomas Frederick Moore in 1979, to another dealer in 2002, and thence to the consignor. 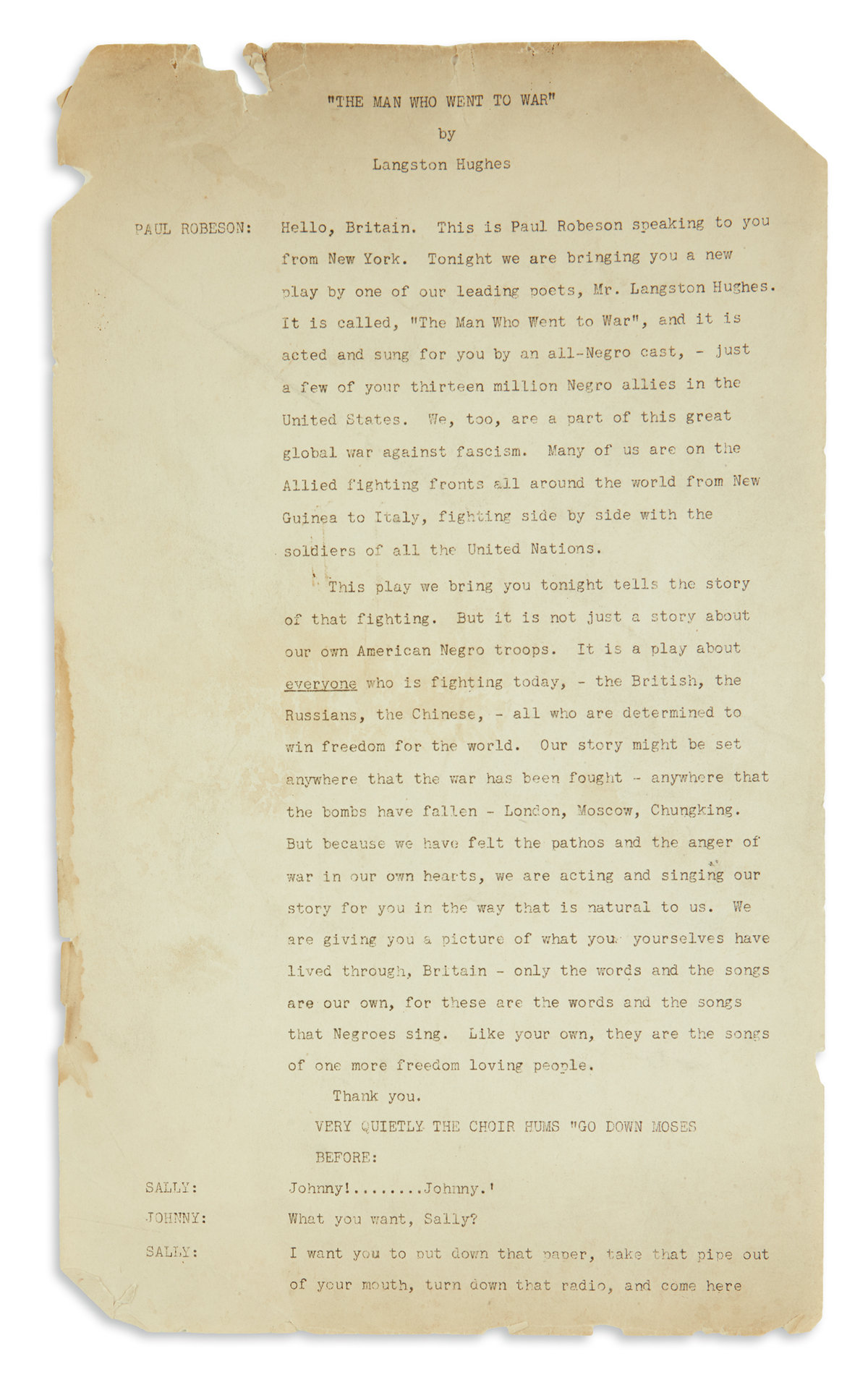