Author and educator Nellie Rathbone Bright (1898-1977) was best known for her work on the 1920s literary magazine Black Opals (see lot 264). A University of Pennsylvania graduate, she spent 17 years as a principal in the Philadelphia school system. Offered here are a wide-ranging variety of letters addressed to Bright over the course of her career, a few of them referencing her work on Black Opals. Highlights include:

Autograph Letter Signed from notable artist Laura Wheeler Waring (1887-1948). Addressed to the members of the Laura Wheeler Art Club at the Durham School where Bright taught, it thanks the students for a Christmas handkerchief. An additional personal note to Bright is inserted. The artist participated in the Harmon Foundation's first exhibition for African American art later that year. Westchester, PA, 7 January 1927.

A pair of Autograph Letters Signed from author Jessie Redmon Fauset Harris (1882-1961), former editor of the Crisis. In the first she writes after a visit to Bright: "Everything in your home helped me--the lovely house, the fire, the rum, the lunch, and the good talk. I enjoyed those few moments of confidence between us." The second describes her pleasant vacation in Atlantic City, NJ: "I don't imagine the board-walk has its equal anywhere. All along I kept thinking of what a lovely, spontaneous talk we had, and also of those poems. I hope you will finish them up." Montclair, NJ, 10 February and 9 July 1948.

Letter Signed from composer Alton A. Adams, a native of the Virgin Islands and the first Black bandmaster in the United States Navy. He reflects on the death of Black Lutheran minister Daniel E. Wiseman, and concludes with a discussion of his own work: "Enclosed you'll find a picture of my band. . . . They are a fine bunch. We have a good band now. My work has been specially commended to the Navy Department by the command here. . . . I will organize and head a Virgin Islands navy band by authority of the Navy Department." He encloses a Real Photo postcard of his Virgin Islands Navy Band. Guantanamo Bay, Cuba, 7 October 1942.

Letter Signed from attorney Raymond Pace Alexander, inviting Bright to a meeting with Carter Woodson to start a Philadelphia chapter of the Association for the Study of Negro Life and History. Philadelphia, 7 November 1927.

Pair of letters signed by James H. Young, Bright's collaborator on Black Opals. About a rival publication, he writes: "I have seen Lightning . . . but as you say Black Opals undoubtedly will surpass it in every detail, at least I am sure everyone will catch our point of view." Germantown, PA, circa 1928.

Autograph Letter Signed from Black opera singer Florence Cole-Talbert (1890-1961), a mentor to Marian Anderson: "I have received Black Opals. . . . I am happy to see the names of new young writers among your contributors. . . . I am to sing with the Los Angeles Symphony Orchestra Jan. 28 and it will be broadcasted by KFJ." Los Angeles, CA, 7 January 1929.

Pair of Autograph Letters Signed by Black artist Frank J. Dillon. In the second he writes "I have done quite a bit of painting including all branches, which has kept my funds in reasonably good shape. Mount Holly, NJ, 18 March 1929 and 22 November 1942.

Autograph Letter Signed by pioneering Black Bermudian golfer Louis Rafael Corbin, mentioning his most famous student: "Joe Louis will make about $1000 per game while I will get about $750. . . . Will be in Philadelphia for the Negro Nat'l." Hamilton, Bermuda, 21 May 1947. 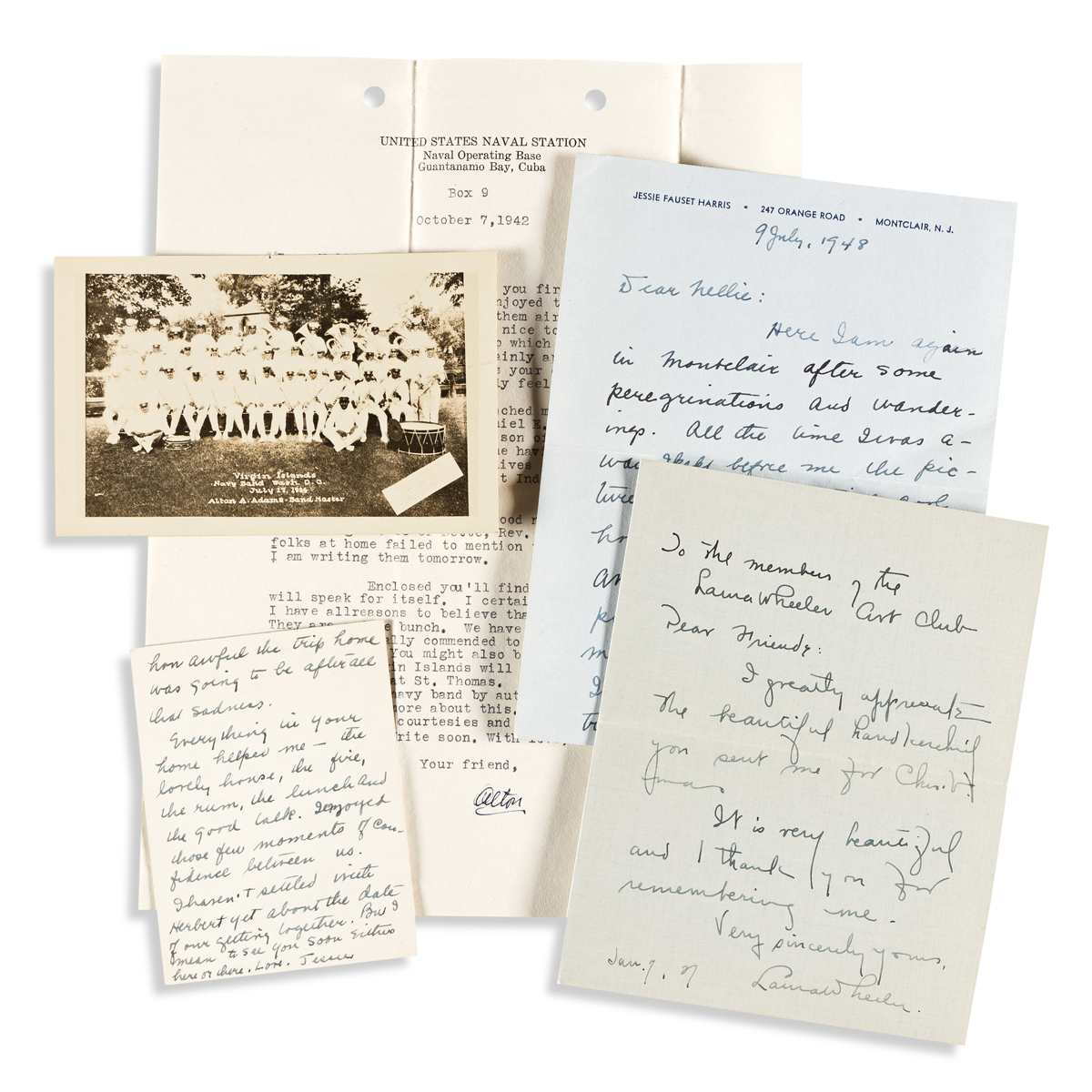