First edition. Phillis Wheatley (circa 1753-1784) was born in Senegal and sold into American slavery when she was about eight years old. She was permitted an unusual degree of formal education by her owner, a Boston merchant named John Wheatley, who encouraged her literary efforts. On a visit to England in 1773, she arranged the publication of this volume of poems, and was given her manumission shortly afterward. Her poetry came to the attention of George Washington, Thomas Paine, John Paul Jones, and Thomas Jefferson, but she nonetheless worked as a scullery maid to pay her bills, and died in poverty at the age of 31.
This volume includes, in addition to Wheatley's poems, a dedication to the Countess of Huntington who had sponsored the publication, Wheatley's two-page preface, and an endorsement by her owner John Wheatley. It also includes a remarkable endorsement by a board of 17 distinguished Bostonians including Governor Thomas Hutchinson and future governor John Hancock, announcing that "we whose names are under-written, do assure the World, that the Poems . . . were (as we verily believe) written by Phillis, a young Negro Girl, who was but a few Years since, brought an uncultivated Barbarian from Africa, and has ever since been, and now is, under the Disadvantage of serving as a Slave in a Family in this Town."
The iconic frontispiece portrait of Wheatley is present and well-preserved. It is often credited to Scipio Moorhead, who much like Wheatley practiced his craft while in a state of slavery in Boston. A poem in this volume is dedicated to him: "To S.M. a young African Painter, on seeing his works" (pages 114-5).
In the annals of African-American literature, Wheatley's Poems on Various Subjects was preceded only by poems in broadside or short pamphlet form (by Jupiter Hammon and Wheatley herself), and by the 1770 Narrative of the Most Remarkable Particulars by James Gronniosaw, who had spent many years as a slave and freedman in America, but published his narrative after settling in England. Afro-Americana 11111; Blockson, One Hundred and One, 68; Church 1101; Sabin 103136; Stoddard 237 (conforming to all Edition 1 points); Wegelin 434. 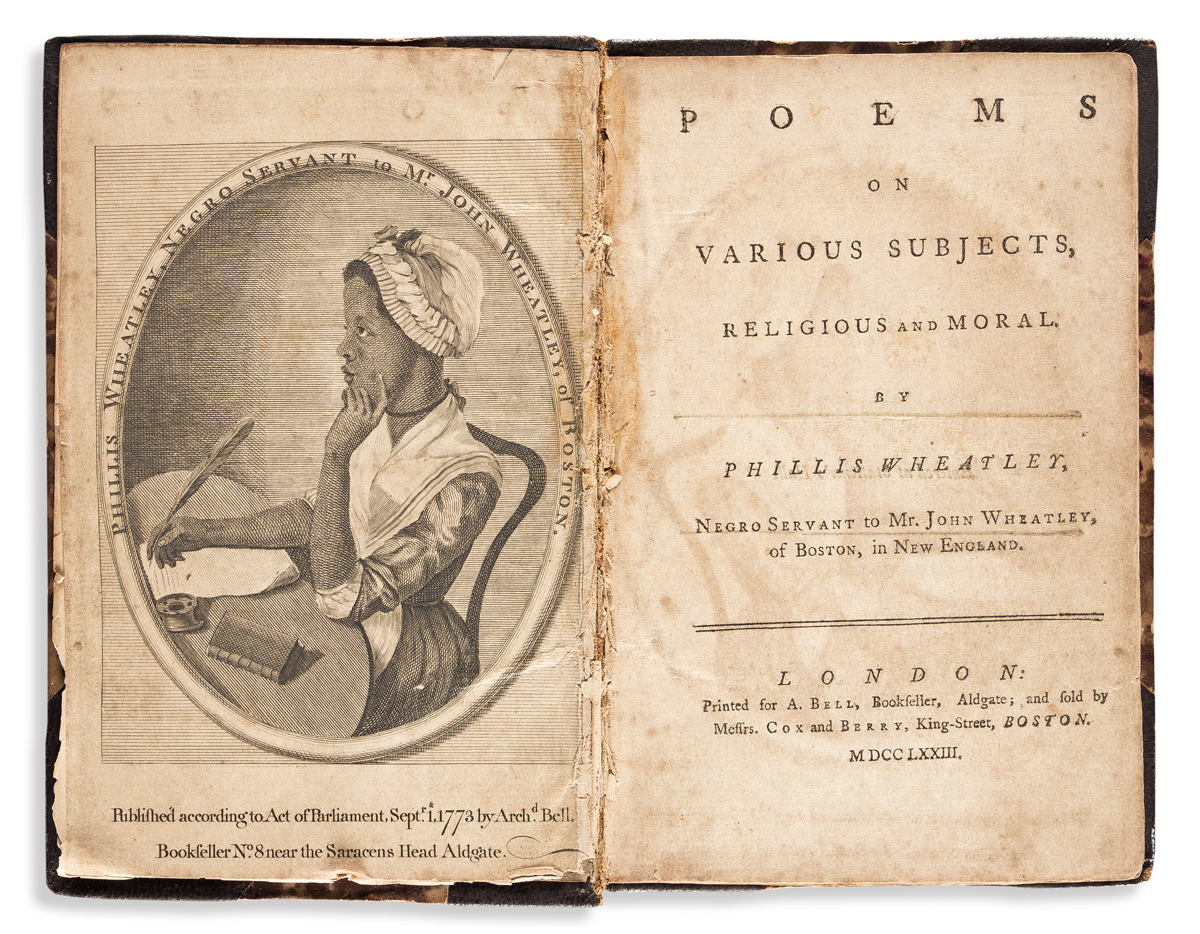