The original owner of this volume was Samuel Lynde (1653-1721), a prosperous Boston merchant. He began keeping notes on the sermons he attended in 1684, and continued intermittently through 1694. Each sermon was headed with the name of the minister, and the biblical verse on which the sermon was based; he occasionally added the date. His summary of each sermon was long and detailed, usually ranging from 2 to 5 pages long. He recorded 32 sermons over a 10-year period, most of them between 1684 and 1687, and almost all of them by "Mr. Moody" and "Mr. Alwin" or "Alen." These would almost certainly be the Rev. James Allen (1632-1710) and his assistant Joshua Moodey (1633-1697), who were both at Boston's First Church during this period. This was an interesting period in the religious history of Boston, as the Salem witch trials took place in 1692. The Boston clergy were generally uneasy about the persecution of the alleged witches, and Moodey is said to have helped two of them escape. Rev. Allen delivered 10 sermons from Revelations during this period, apparently working his way sequentially through the book. His favorite text seemed to be Revelations 2:11, which inspired 4 sermons: "He that hath an ear, let him hear what the Spirit saith unto the churches; He that overcometh shall not be hurt of the second death." Lynde recorded sermons by two other ministers: one by a "Mr. Lod" who we cannot identify, and one by a "Mr. Pike," very likely Joshua Moodey's son-in-law John Pike (1652-1710) of Dover, NH.
In 1701, Judge Lynde married his third wife, the widow Mariana Bendall Allen. Two years later, he gave this volume to his new stepson Daniel Allin (born 1688), who wrote "Dan'l Allin his book . . . pr my father Samuel Lynde the 6th day of February 1703." Allin seems to have embellished his inscription with a small doodle of an eagle holding a hammer. He recorded 8 more sermons at the end, all from February 1703 or shortly after. These sermons were all by Samuel Willard (1640-1707) or Ebenezer Pemberton (1671-1717), both of Boston's Third Church, best known as the Old South Church. Willard was one of the leading ministers in America at that time, had been an active opponent of the witch trials, and was then serving as the acting president of Harvard. His master work, A Compleat Body of Divinity, would be published posthumously in 1726 (see lot 111 for a copy). His 4 sermons recorded here are all from the Book of Jeremiah. We don't know what happened to young Daniel Allin--he doesn't seem to have survived to adulthood--but in a small coincidence, his sister Katherine Allin later married the son of the Rev. Samuel Willard. A complete list of the sermons recorded by Lynde and Allen is available by request. 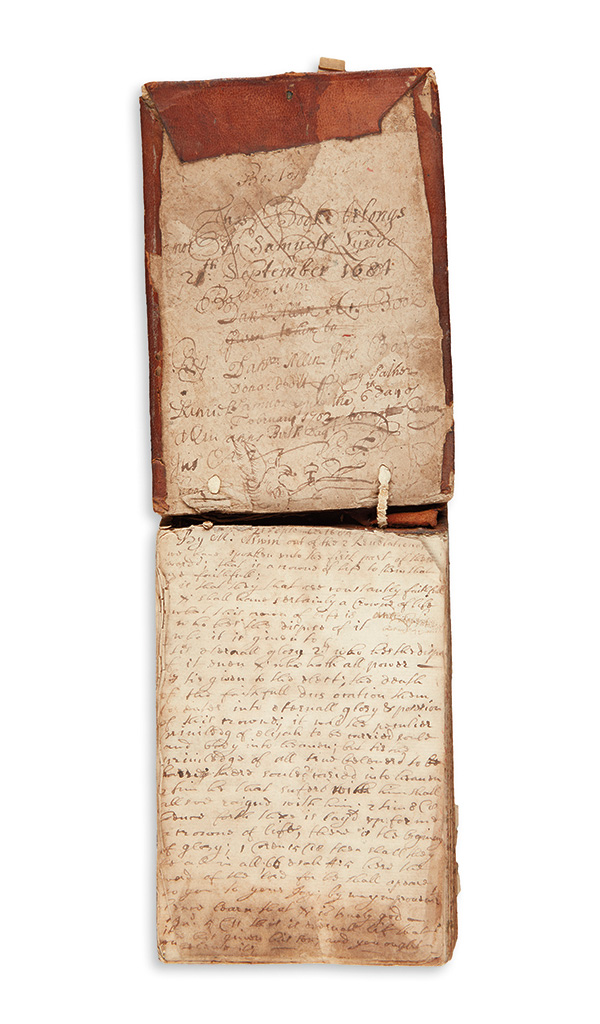