Price Realized: $ 2,600
Price Realized: $ 3,250
?Final Price Realized includes Buyer’s Premium added to Hammer Price
Estimate: $ 2,000 - $ 3,000
"GEN'L TAYLOR HAS AGAIN TRIUMPHED . . . MONTEREY HAS FALLEN" (MEXICAN-AMERICAN WAR.) DAVIS, JEFFERSON. Autograph Letter Signed, "Jeff'nDavis," as Colonel, to Secretary of the Treasury Robert J. Walker, anticipating the reaction of the Mexican government to the fall of Monterrey, arguing that transportation and forage is inadequate for advantageous pursuit of the retreating army, describing his own recommendation to reinforce the frontier, and mentioning his regiment's successful employment of new rifles. 5 pages, 4to, written on a folded sheet and recto of a separate sheet unobtrusively bound together with linen; terminal leaf inlaid, faint scattered soiling. (MRS) Monterey, 12 October 1846
Set Alert for Similar Items

"D'r Sir, before this reaches you you will have learned, that Gen'l Taylor has again triumphed; that Monterey has fallen.
". . . As it is not expected that the Mexican government will act before their congress meets, the first speculation is, will our government wait, if not, what line of conduct shall we expect. The Mexican army has gone dispirited on the Saltillo road and is said to be retreating through Saltillo towards San Louis de Potosi. An army of ten thousand which is about the size of that which retired from Monterey, will exhaust the supplies of a country as poor in agricultural products as this, upon any route it may pursue, if then we follow them it must be with the expectation of transporting nearly all of our supplies with us.
"We have not been supplied heretofore with adequate transportation, and in our march here the strange spectacle was presented of an army invading a country and relying to a great extent upon the inhabitants for transportation. As we advance additional transportation will be required, increasing ever faster than the increase of distance. It will not do longer to rely upon that which has even thus far been a problem, the faith of the Mexican muleteers. . . .
"If any moral effect could be produced by military achievement enough has been done at this place to produce it. Here we found an Army about double the size of our own; yet we were allowed to approach through a country offering every opportunity that an enterprising officer would ask to check an advancing army; without a battering gun, or a trenching tool, we invested the Town, so strong in its defences, so strong in its national advantages, as to have been considered impregnable before the recent additions to its works. Indeed it is said that a superstitious confidence existed among the people that Monterey could not be taken. Three days sufficed to make them ask for terms . . . .
"We are now at the Sierra Madre, the terms of the capitulation give us for the present a time which at the end of the truce can be modified at will, and the strong positions occupied with adequate garrisons, would form a military frontier from the Gulf of Mexico to that of California. This could be held at a small portion of the expense of offensive operations, and with probably less than the number of troops now in the field.
"But if a more active policy be preferred if it shall be sought to drive Mexico into a treaty rather than wait until she seeks it, then in view of the more fertile and less exhausted country which lies between this and Tampico, were it not better to move through Linares, and Victoria, upon that point; at which the Navy should cooperate with Gen'l Taylor, bringing him reenforcements to supply the place of the Troops left to garrison the different posts he had established.
"Tampico being taken from that part an Army might sail to reduce Vera Cruz; with the necessary supplies, and munitions thence to advance to the city of Mexico; and hunt the vagrant government to the last hole of its burrow. . . .
"Our Mississippians have been in a position which tried both the men and the new Rifles, and the experiment has proved them equal to my highest expectations. . . ."
In June of 1846, Jefferson Davis had been voted to lead a volunteer regiment as Colonel. Davis insisted upon adopting the newly-designed Whitney model 1841 rifles for his Mississippian regiment, overcoming objections from Winfield Scott that they were untested and ought not to be used. The weapon came to be known as the "Mississippi Rifle" because of its successful use by this regiment. 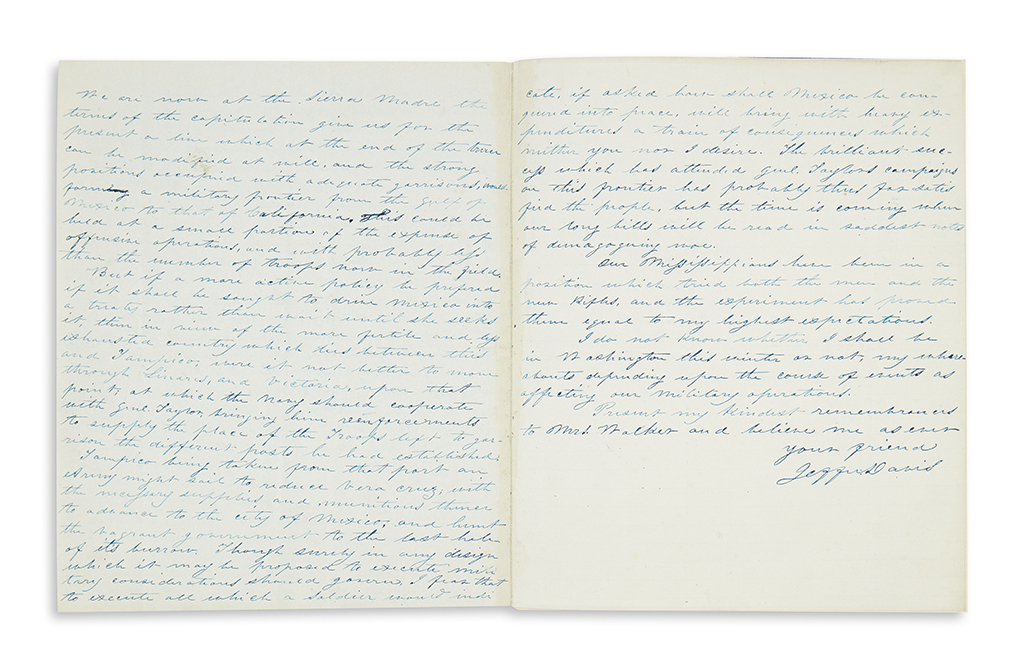