These volumes record Nahuatl and Spanish regulations and records of Indian religious brotherhoods in colonial Mexico City. Atzacoalco was one of the four quarters of the Aztec imperial capital, Tenochtitlan. It survived as San Sebastián, an indigenous barrio of colonial Mexico City. The central church from which the barrio derived its name, San Sebastián, served the chiefly indigenous, Nahuatl-speaking parishioners. Some of these parishioners founded several cofradías or lay religious brotherhoods, which sponsored and organized religious feasts and processions. The seventeenth-century records of two of these brotherhoods are included in this lot, both as bound volumes. The first, much longer volume, containing far more Nahuatl text, is of the "cofradía de las cinco llagas y santo entierro" (the brotherhood of the five wounds and holy burial of Christ) founded in 1593. The second shorter book is of the "cofradía de nuestra señora del tránsito" (the brotherhood of Our Lady of the Transit, a reference to the Virgin Mary's Assumption into heaven) founded in 1621. This second volume features a colorful armorial illustration of Mary's death. These cofradías were dedicated to staging religious feasts, masses, and processions. In the case of the former, it was processions and masses during Holy Week for the five wounds Jesus Christ received during his crucifixion and his burial; the latter made a procession on the day of Mary's assumption, among other festivities. Both volumes begin with the vows (tonetol) and rules of the cofradías, which were constantly updated, revised, and rewritten throughout the texts. The religious vows, mostly in Nahuatl, affirm the faith of the indigenous cofradía members, replete with Indo-Christian neologisms using Nahuatl words to describe Christian concepts. Both volumes also include detailed financial records of the decorations and implements used in the processions, as well as descriptions of the processions themselves. The scribes sometimes note when objects were damaged or destroyed (opoliuh). Gathering limosnas or alms was another responsibility for the cofradías, and records of the alms they collected are also present. Notably, the book of the "cofradía de las cinco llagas y santo entierro" lists all of the members of the cofradía and their wives, grouped according to the tlaxilacalli or indigenous neighborhood of San Sebastián that they resided in; those interested in the community divisions and jurisdictions of colonial Mexico City will find this part particularly fascinating. Aside from the Carmelite (later Augustinian) friars who supervised, indigenous people carried out nearly all of the cofradía's affairs. Descendants of the Aztec emperor Montezuma were involved with both of them. Don Diego Luis de Moctezuma, Count of Moctezuma, signed 2 documents in each volume, and was a member of the "cofradía de nuestra señora del tránsito." An inventory of processional gear in the other volume has a note in the margins that one of the damaged items belonged to Juan Bautista Moctezuma. 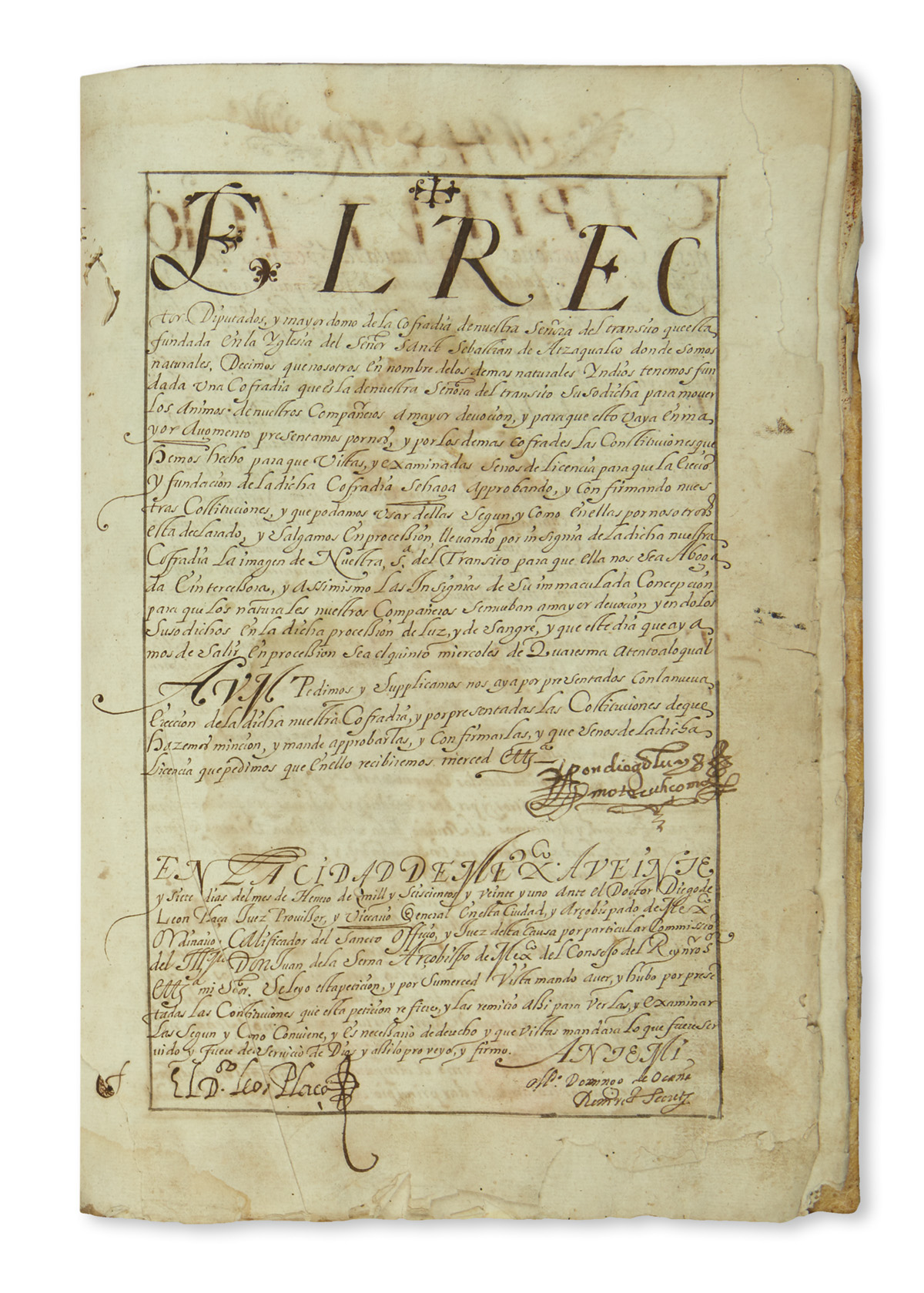