Thurlow Weed (1797-1882) was a New York newspaper publisher who was very influential in the state's Whig Party. As a young man publishing the Rochester Telegraph, he crossed paths with Mormon prophet Joseph Smith. Near the end of Weed's life, he dictated and signed this letter concerning his encounter with Smith: "Friend Hall: In 1825 or 1826, Joseph Smith the original Mormon called at my office in Rochester saying that he had been guided by inspiration to a cavern near Palmyra, Wayne Co., in which he found a tablet. He then placed this tablet in his hat, from which he read or affected to read the first chapter of the Book of Mormons. His object he said was to employ me to print a book containing a new revelation with which he, as its inspired leader, was to establish a new religion. Having no facilities for book printing, I referred him to Elihu Marshall, a neighboring publisher. Smith called on Mr. Marshall, who also declined, probably as I had done believing the self-styled prophet an impostor. Subsequently, Smith returned, bringing Mr. Harris, a substantial farmer and one of his followers, to be security to pay for cost of printing. Smith then read further revelations from his golden tablet, but I remained incredulous and lost the notoriety of being the first Mormon printer. The book was printed a few months afterwards at Palmyra. Among his early converts was W.W. Phelps, publisher of a paper at Canandaigua. 'Joe Smith' was thick set, smooth face, about five feet eight inches, and apparently 28 or 30 years of age. He had the reputation of being an idle fellow, spending most of his time in the village tavern doing neither good nor harm."
Weed's refusal to print the Book of Mormon is a well-known incident in the early history of the church, but this account appears to be unpublished. Provenance: Originally laid into an 1830 Book of Mormon, sold by Midland Books to Thomas W. Streeter in 1945; Parke-Bernet's Streeter sale, 23 April 1968, IV: 2262; Sotheby's sale, 5 June 1980 to the Forbes Collection. 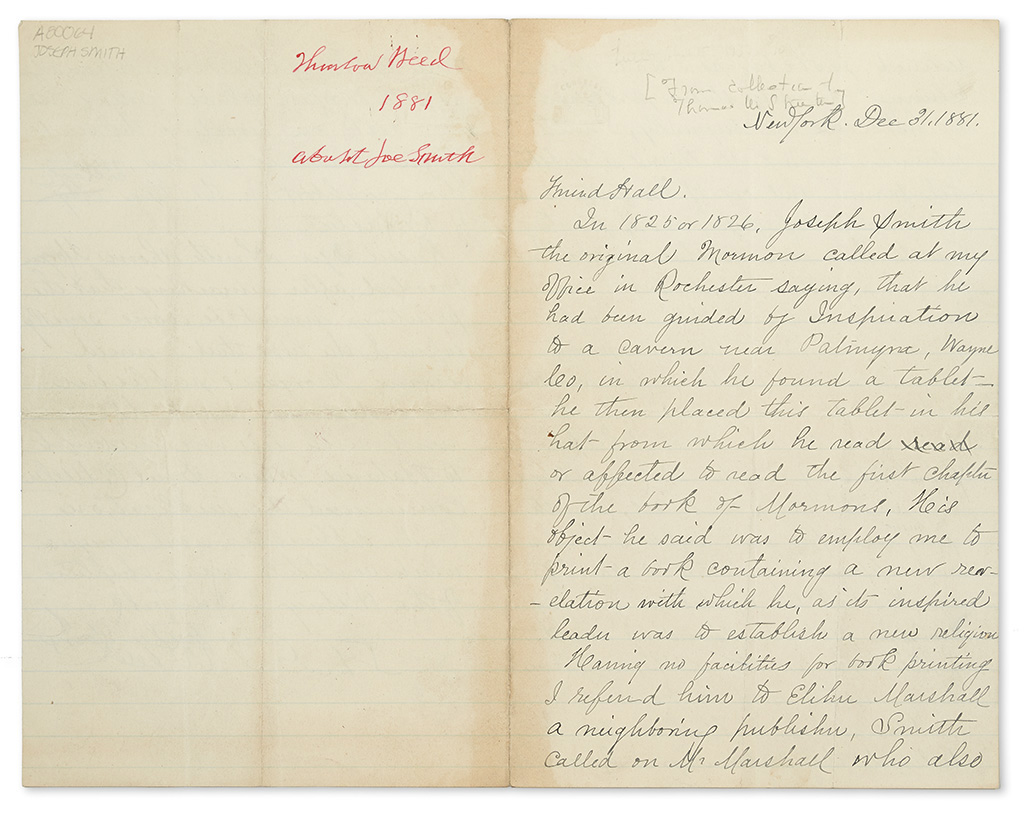