The U.S.S. Narragansett left late in 1871 on a diplomatic and research expedition throughout the South Pacific. This illustrated logbook begins in Honolulu and continues through Samoa, concluding in the Marshall Islands. It was kept by Midshipman George A. Calhoun (1849-1897), who later reached the rank of lieutenant.
6 photographs are tipped into the volume: an 18 x 27-inch unmounted photograph of a manuscript map titled "Track Chart of the U.S.S. Narragansett," drafted by Calhoun; and 5 smaller albumen photographs of Samoa, the Gilbert Islands, and the Marshall Islands taken by the ship's assistant surgeon Henry C. Eckstein, mounted on lined paper and captioned in manuscript (pages 75, 89, 299, and 317)--one of them showing Maunga, chief of Pago Pago, with his family. Laid in is a large albumen portrait of Calhoun, listing his promotions through 1879.
Manuscript illustrations include detailed plans of the ship's two main decks; a profile of the ship with its colors added in red and blue; 3 full-page profile views of Hawaiian islands, and numerous smaller views of various islands, several to a page. It also includes skillfully executed manuscript maps of Hawaii, Honolulu Harbor, and 3 parts of Samoa: Apia, Leone Bay, and Pago Pago.
The content of the journal is also interesting. On a visit to Pago Pago in Samoa, Captain Meade negotiated a treaty to build what became United States Naval Station Tutuila, in use through 1951. The 15 February 1872 entry records a visit to Pago Pago: "One of the principal native chiefs came on board to pay his respects to the commanding officers." Three days later, the ship investigated notorious South Pacific villain William "Bully" Hayes: "Sent an armed boat which boarded and took temporary possession of the American brig Leonora. . . . Capt. Hayes was brought on board and detained on suspicion of having been engaged in unlawful acts in the Micronesian and other islands." Bound in between the pages of the logbook entries are several 4-page descriptive pieces by Calhoun on Honolulu (page 16), "Naval Etiquette in a Foreign Port" (50), Apia (86), Pago Pago (88), the Phoenix Islands (122), Baker and Howland Islands (132), "Essay on Deviation Tables" (208), and several islands in the Gilbert (299) and Marshall groups (317). These essays cover navigational points, local trade, and more. This volume is an important and visually striking historical record of the early American military presence in the South Pacific. 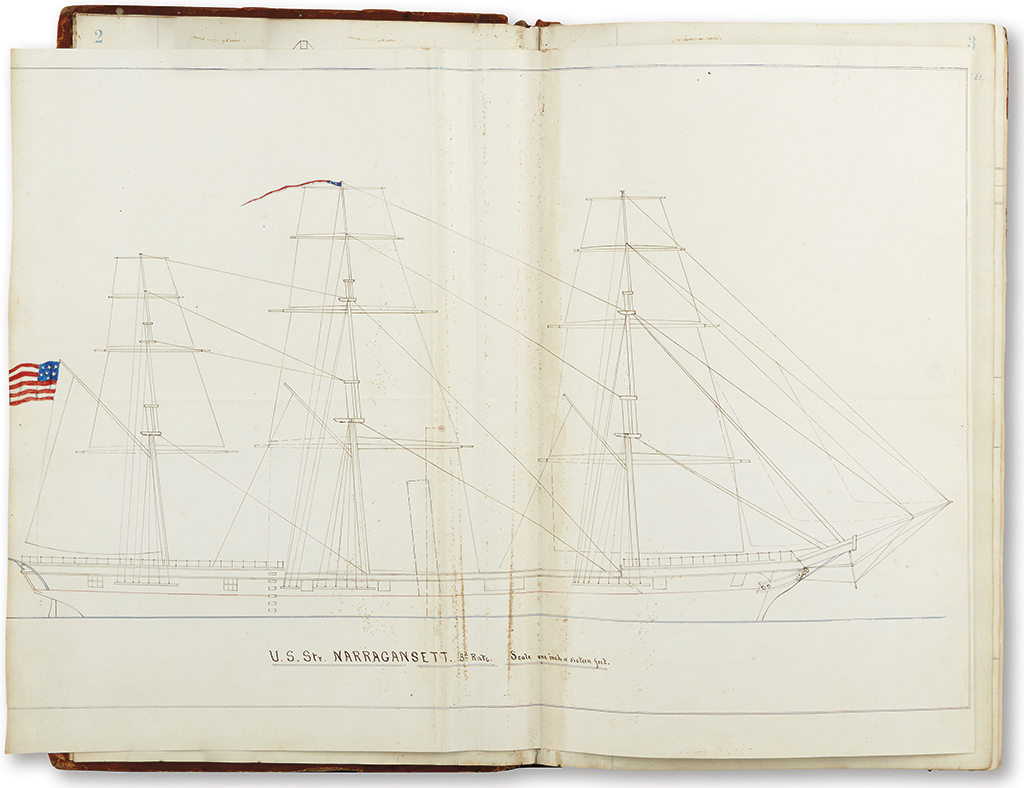