an exceptionally entertaining naval diary kept by a crewman on a pacific cruise. This journal traces almost the entirety of the 1849-1852 cruise of the USS Vincennes under commander William L. Hudson, which went from New York to Brazil, the west coast of South America, Hawaii, the Puget Sound, San Francisco, and back to New York. The author, Robert R. Christian, was presumably a crew member keeping an unofficial account. The diary does not include ship bearings or changes in the watch, but it does have many amusing details that would have no business in an officer's log. In Rio de Janeiro, "all our officers went ashore and got gloriously drunk" (28 January 1850). In Guayaquil, "a marine by the name of Stuart during a fit of the horrors jumped overboard while at the grog tub" (28 May 1850). Three days later, a party went ashore "and brought back a tremendous alligator 9 feet long, also . . . a quantity of live monkeys." One Sunday at Monterey, CA, "Capt. H. performed divine service at an unusually early hour and entirely omitted the sermon, being in a devilish hurry to go ashore" (12 October 1851).
In the heat of the Gold Rush, many sailors dreamed of making greater fortunes on land than at sea, so desertions were a problem. While in port at Valparaiso, "extraordinary rumours about California. Two seamen who had been breeding a disturbance on board an American merchantman were brought on board and put in the brig in double irons" (16 April 1850). 22 men deserted that month, listed by Christian on 21 April, including "Dorsay, nigga." That day the Vincennes "boarded the American ship Iowa . . . bound to San Francisco, in search of men." The ship "had considerable difficulty in getting up anchor on account of having lost so many men" (23 April).
The Vincennes stopped at Guayaquil, Ecuador during a period of unrest. Christian was on shore to witness an execution: "Two Ecuadorians (mulattoes) shot near the sawmill. The firing party stood three paces from the criminals. The poor wretches were butchered in a horrid manner, characteristic of this people who are very sanguinary and bloodthirsty" (23 June 1850). The sloop reached California on 23 August 1850. The desertions began anew, with one Henry Mortimer drowning as he attempted to swim away (27 August 1850). Christian gaped at the high prices for labor, noting "there are hundreds without employment notwithstanding, so that even El Dorado has its inconveniences; the largest fortunes here are made by the gambling houses" (14 September 1850). He thought that even "the elite of San Francisco . . . have a sickly look about them" and the common folk "are the raggedest of the ragged, lousiest of the lousy" (5 October 1850). San Francisco's wealth was in evidence, though, when he noted "we have $300,000 in gold dust aboard" (10 October 1850).
Christian was moved to write an extended description of Payta, Peru on 20 February 1851: "The liquor they brag so much about called Italia and Pisco would poison a Comanche Indian. . . . There are 2 or 3 white whores in this town and the price they set on their charms varies from 3 to 5 dollars a night." The sloop spent Christmas of 1851 in Honolulu, and were visited by King Kamehameha the following day. Next was Port Townsend, WA, where they were visited by "several male and female Indians of the Clannan tribe . . . The Indians on board were detected in the act of stealing the buttons off our coats" (5 and 7 February 1852). On Easter Island, "five of the natives of the island swam off to the ship . . . the men were entirely naked, the woman had about her loins a few twigs secured by a string. . . . They traded their yams for old clothes, showing their gratification at their bargains in loud cries" (14 June 1852). The diary concludes with a long and apparently unpublished song about the Vincennes, beginning "Come all you bold seamen wherever you be / I pray give attention and listen to me." 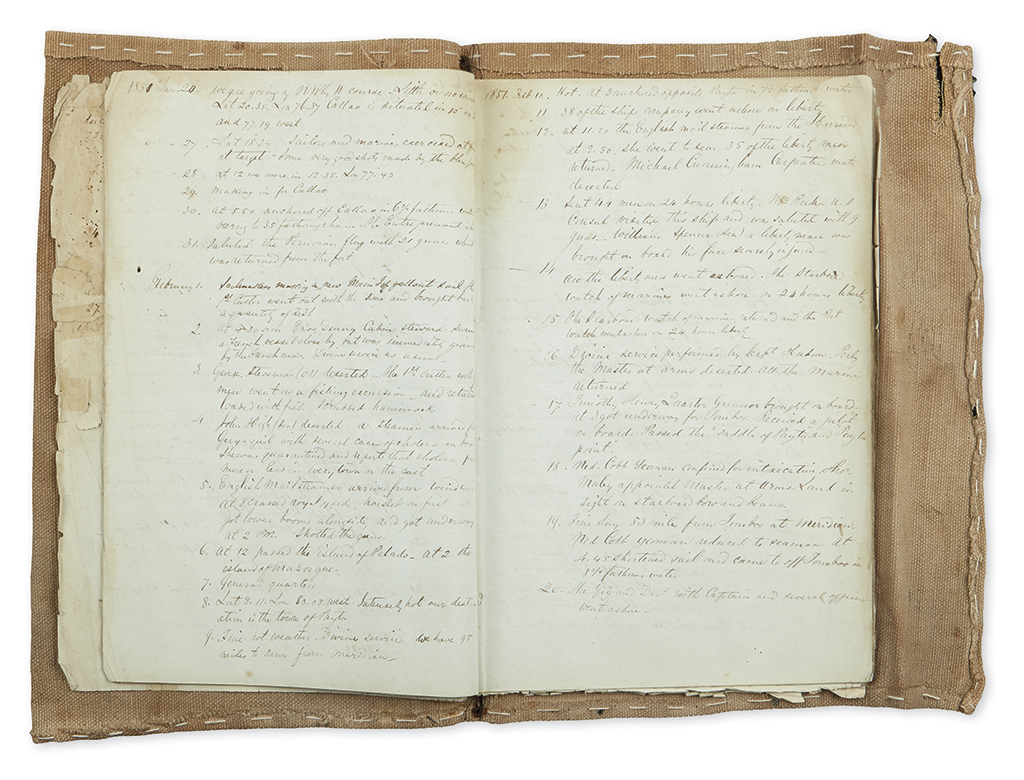