Pierre St. Medard (1755-1822), also known as Peter, was a French-trained physician who gave his loyalty to the American Revolution, serving as a surgeon's mate aboard two ships, settling in Boston after the war, and then in 1798 rejoining the navy as a surgeon, serving aboard the USS Constitution and other vessels.
At the heart of this collection is Dr. St. Medard's remarkable manuscript diary kept aboard the frigate New York from August 1802 to December 1803. The New York was part of an American fleet sent to the Barbary Coast of northern Africa to end the constant demands for tribute and ransom from American merchants. In Tunis, St. Medard recorded a threat by the Bey "that if our government or the Commodore should not agree to, he would put the consul in slavery or perhaps put him to death" (24 February 1803), with Commodore Richard Valentine Morris held captive when he went on shore to negotiate (4 March) and released 4 days later when the ransom was paid. St. Medard's greatest personal challenge was a shipboard accident: "An explosion took place in the gunner store room by a spark of fire fouling from the candle in a bucket countaining about 20 of powder beside 30 dozen of the marine catreges, a number of powder horns full of powder . . . by which 9 officers & men were dangerously burnt & hurt, 3 of which died in less than 36 hours after the explosion" (25 April 1803). He then describes several armed engagements in May and June, including a raid which has been called "the first American amphibious landing on a hostile foreign shore" (Fremont-Barnes, The Wars of the Barbary Pirates): "8 boats were armed with officers sailors & marines to attack the shore & to burn the streets, which was executed, the boats being covered by the 2 ships & the schooner's fires. The hills, shore & the old castle were covered with men, a constant fire was kept up from on both sides. We saw a great number of the Turks fall by the shots & a number shot on horseback. . . . Mr. David Porter, our 1st Lieut. & one of our marines being wounded" (2 June 1803). Additional notes on this important diary are available upon request.
Among St. Medard's other papers in this lot is a 8 June 1803 letter (probably a translated transcript) from the Pasha's assistant to Commodore Richard V. Morris, part of the negotiations to end hostilities. These negotiations are also discussed at length in the diary. The collection also includes letters signed by several cabinet members, most with their franking signatures: Secretary of the Navy Robert Smith (12 letters, 1801-06); Treasurer Thomas T. Tucker (13 letters, 1804-1819); Secretary of War William Eustis (1810); and Secretary of the Navy Smith Thompson (1820). Also included are letters of recommendation collected by St. Medard, and extensive correspondence and documents from his work selling patent medicines as the Boston agent for a fellow French expatriate, Ligneau of New York, from 1816 through 1819.
J. Worth Estes wrote a book on St. Medard's naval service, particularly the 1802-1803 period: Naval Surgeon: Life and Death at Sea in the Age of Sail (Canton, MA, 1998)--a copy is included with this lot. Parts of the 1803 diary are quoted on pages 115 and 124-131. With a binder of research notes compiled by descendant Elizabeth Andrews (1911-2004), from whose estate these papers were purchased. A more detailed inventory is available upon request. See also St. Medard's Revolutionary War medical log (lot 26) and Andrews family papers descended through his stepdaughter Sarah Farrington Masson (lot 91). 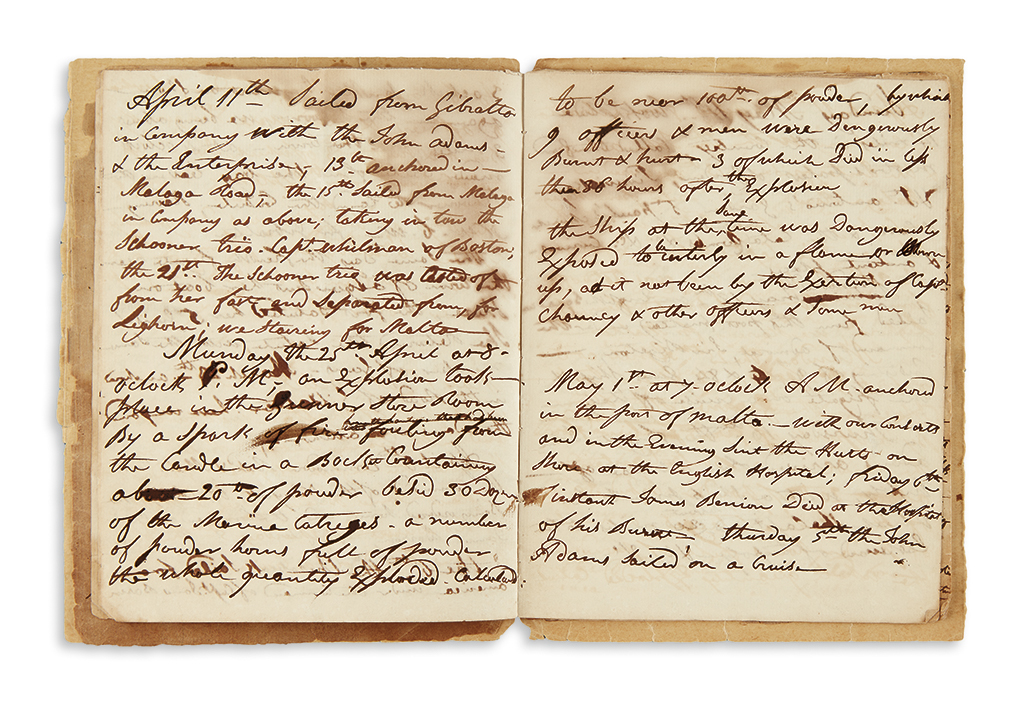 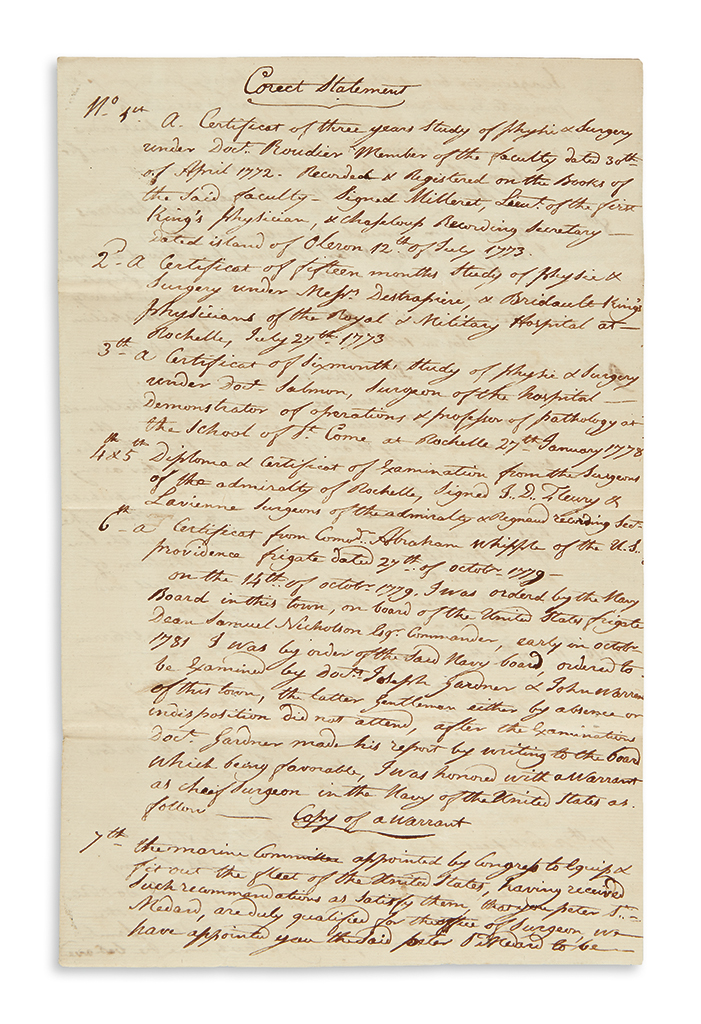