Roswell Lyman Colt (1779-1856) was a central figure in the industrial history of Paterson, NJ as well as a major railroad investor. Until returning to Paterson in 1837, he spent most of his time in Baltimore, and relied on several lieutenants in Paterson to keep him informed on his massive properties and business ventures there. From 1814 to 1850, he served as head of the Society for Useful Manufactures--a private corporation which controlled the water rights to all of the town's mills and essentially served as the town's guiding body. It had been founded by no less a figure than Alexander Hamilton in 1791, with the goal of launching a major American industrial center around the mighty Great Falls of the Passaic River. When the SUM fell upon hard times, the Colt family bought up most of the stock and assumed control.
Most of this collection consists of letters to Roswell Colt, many of them from his younger brother John Colt (1786-1877) of Paterson. John served as vice president of the Society for Useful Manufactures. A frequent topic of John's letters was the Morris Canal which ran through Paterson. It opened in 1829 with some investment from the Colts, but they soon decided that railroads were the wave of the future and opened a rival rail line. John also had his own side ventures in Paterson which he described in his letters. He owned a nail factory and a textile mill which manufactured cotton duck canvas for use in sails--a product he was continually attempting to market to the United States Navy. One letter dated 1 February 1825 discusses his Philadelphia rivals in the sailmaking field, including James Forten (perhaps the wealthiest African-American in the nation at that time), describing a "jury of 10 captains & 6 merchants who unanimously decided that my No. 2 was preferable to Crooks' No. 1, & Mr. Forten the sailmaker & agent of Crooks was also called in & had to acknowledge the same fact."
A run of 32 letters discusses the cholera epidemic which swept Paterson and the nation in 1832. One of Colt's Paterson agents, Joseph Smith, reported on 16 August: "The panic is now great. John & family, Dickerson & family, Ogden, Pennington, and a host of minor names are fled. I am the last of the Mohicans. . . . When nothing remains but to stay & drown, I too shall put my family into the life boat and escape from the wreck." On 20 August, cousin Jabez Colt also noted the flight of the city's leaders, observing that "this creates bad feelings among the mechanics who also talk of fleeing to the country, saying their lives & their children are as dear to them as the others. . . . [The children] will be difficult to collect again and, being out of employment, they will be out of bread."
The most well-known correspondent in the collection is Daniel Webster, who wrote two friendly Autograph Letters Signed to Roswell Colt in 1848, both concerning the sale of cattle. Also included are 3 letters from prominent New Jersey politician Philemon Dickerson, 1835 and undated. Although the large majority of the collection consists of correspondence, it also includes a small group of financial papers, 4 obsolete banknotes from New Jersey and elsewhere, and the manuscript directors' minute book of the Hamilton Manufacturing Company of Paterson, 1831-62; Roswell Colt sat on the board.
The collection also includes a few earlier papers from Roswell's father Peter Colt (1746-1824), who also ran the Society for Useful Manufactures in its early years before Roswell took over. A 21 April 1794 letter on "taking of apprentices to be employed at the cotton mill" asserts that "it will be found absolutely necessary to have several boys engaged before the next meeting of the board, & if they were bound apprentices from the first of their employment it would render them more manageable & usefull." A, 8 May 1794 letter discusses laying Paterson out into house lots before the inhabitants attempt "this extraordinary step" on their own.
Some additional branches of the Colt family tree are also represented here, including thick files of family letters to Roswell's unmarried sister Sarah Colt (1781-1872) and niece Catherine Wadsworth Colt Pennington (1815-1895). Only a few letters in the collection extend past 1845, with most of those being addressed to Catherine Pennington and her brother Elias Boudinot Colt (1823-1900) through 1889.
This archive was purchased at a Long Island antique store by philatelist Howard M. Gilpin (1898-1975) of Paterson, NJ circa 1955. It was the central focus of a five-part historical series on Paterson and the Colt family published in the Paterson News, 19 to 24 November 1956. The collection was initially acquired for its stampless cover content, and was described in the Paterson News of 19 November 1956 as "the finest collection of early Paterson postmarks anywhere in existence." 17 Paterson covers which Gilpin deemed most important from a philatelic perspective are displayed in a separate binder, including a handful which Gilpin appears to have sourced outside the Colt collection. The archive was sold by his estate in an H.R. Harmer philatelic auction, 11 March 1976 (catalogue enclosed), where it was acquired by the family of the consignor. 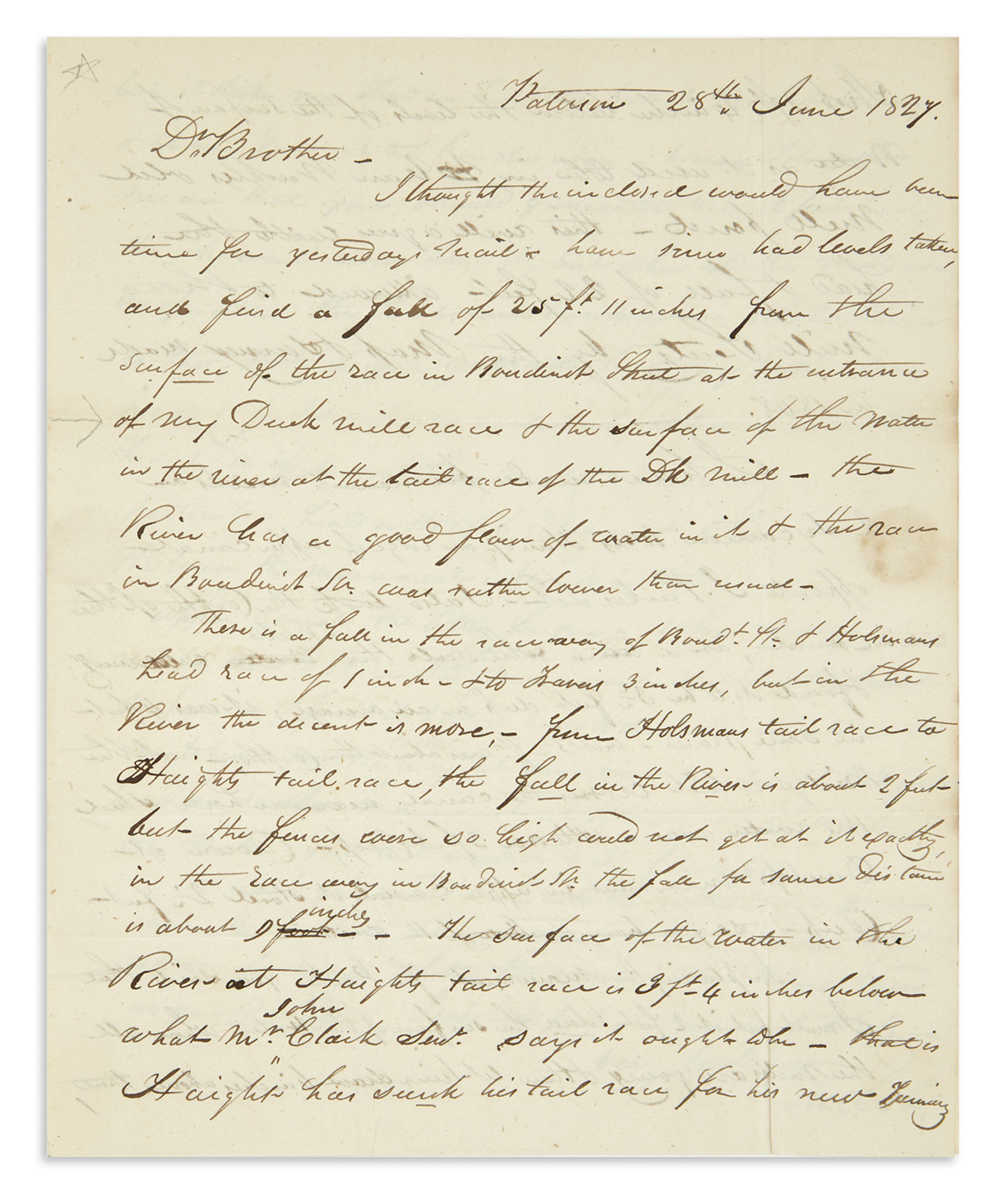