Price Realized: $ 4,200
Price Realized: $ 5,250
?Final Price Realized includes Buyer’s Premium added to Hammer Price
Estimate: $ 2,000 - $ 3,000
(NEW YORK--BROOKLYN.) Courtship letters of Dr. Ralph Malbone and Jane Schenck. 123 manuscript items in 3 binders (0.5 linear feet), including about 65 letters, notes and poems from Ralph to Jane, and 26 from Jane to Ralph, almost all dating from the period of their courtship; many dampstained or worn, a few defective or slightly scorched, but generally legible. Vp, 1810-59, bulk 1810-15
Set Alert for Similar Items

These letters document the long and difficult courtship of Ralph Malbone (1785-1860) and Jane Schenck (1792-1843). Jane was the daughter of Nicholas Schenck Jr. (1765-1836), head of a prosperous Dutch-American family in Flatlands, Brooklyn. Their manor house is on exhibit at the Brooklyn Museum. Ralph was raised in Pomfret, CT; his grandfather had been a wealthy Rhode Island merchant, but the family fell upon hard times. Jane waited for five years to accept Ralph's hand as he clawed his way to financial stability. Their letters could come from the script of a costumed melodrama, full of secret coded messages, disapproving parents, the privations of war, scandalous rumors, and Ralph's unusual scheme for escaping from debt--travelling across the western New York frontier providing smallpox vaccinations.
The courtship begins with a poem which Ralph sent on 21 March 1810. On 17 September 1811, Ralph set forth some of the details of his troubled life, including a Connecticut woman named Fanny Leach who had sworn in court "her most cruel and falce assertion that her child was mine," which he was unable to disprove. He promised Jane that once he settled his debts, he would "take you for my wedded wife." Knowing that her family disapproved of their continued courtship, he explained that all future letters would be addressed to "Enaj Werter," and she could collect them at the post office.
On 16 September 1812, Ralph wrote from the frontier village of Addison, NY to announce his new occupation: "for 6 weeks have practiced vaccinating. My patients amount to 215 at one dollar each, with an acception of a few poor families which I serv'd for naught." He planned to clear $100 per month, reminding Jane, "You know the bar which separates us, property, or rather poverty." One of his later letters (9 April 1813) is written on verso of his promotional broadside, promising protection from "the Small Pox" through the "Kine Pock inoculation." On 20 October, he announced that he had vaccinated 200 more in Troupsburg, NY. As he was being paid mostly in animal skins, he asked Jane to send a list of "price current of the following skins: bear, martin or sable, muskrat, otter & deer."
On 29 March [1813], Ralph was back in Flatlands, asking Nicholas Schenck for his daughter's hand after a long secret courtship: "Truth, duty & obedience compel me to inform you that there is a mutual affection existing between your lovely daughter Jane & myself. This intelligence may surprise you. . . our affections have been mutually & inalterably established for nearly three years." Soon after, Jane writes to "Enoblam" (Malbone spelled backwards) imploring him to make his case in person: "You must not be daunted, nor timorous, but come intrepid & bold, as if you was (what you really are) in every respect, worthy of me." She signed "I ma ruoy d'hsiw rof efiw, Enaj Enoblam" (spell each word backwards to break the code). On 5 April, she describes her family's reaction: "more the expressions of sorrow than rage. . . . They cannot bear the thought of my giving myself up to poverty. Here I've made one promise, that I would never marry you before you was a man of property."
Other letters discuss Palmyra, NY (birthplace of the Mormon faith), Ralph's service in a War of 1812 militia, and rumors of his death in battle. On 28 August 1814, Jane describes Brooklyn's mounting war anxiety and shares "my idea . . . of procuring a boys dress, a pair of boots of seven leagues, & set out in search of you--from my size & looks, I might readily pass for a young boy of 12 or 14." Ralph eventually worked his way back to Flatlands with a sufficient fortune, where he and Jane were married in August 1815 after five years of courtship.
The collection also includes a smaller number of family letters dating from after the 1815 wedding. Ralph eventually moved into real estate; a neighborhood of Brooklyn was known as Malboneville in his honor. They raised several children in Flatlands; the final letter is written by Ralph in 1859, a year before his death. More details on this dramatic family archive are available upon request. 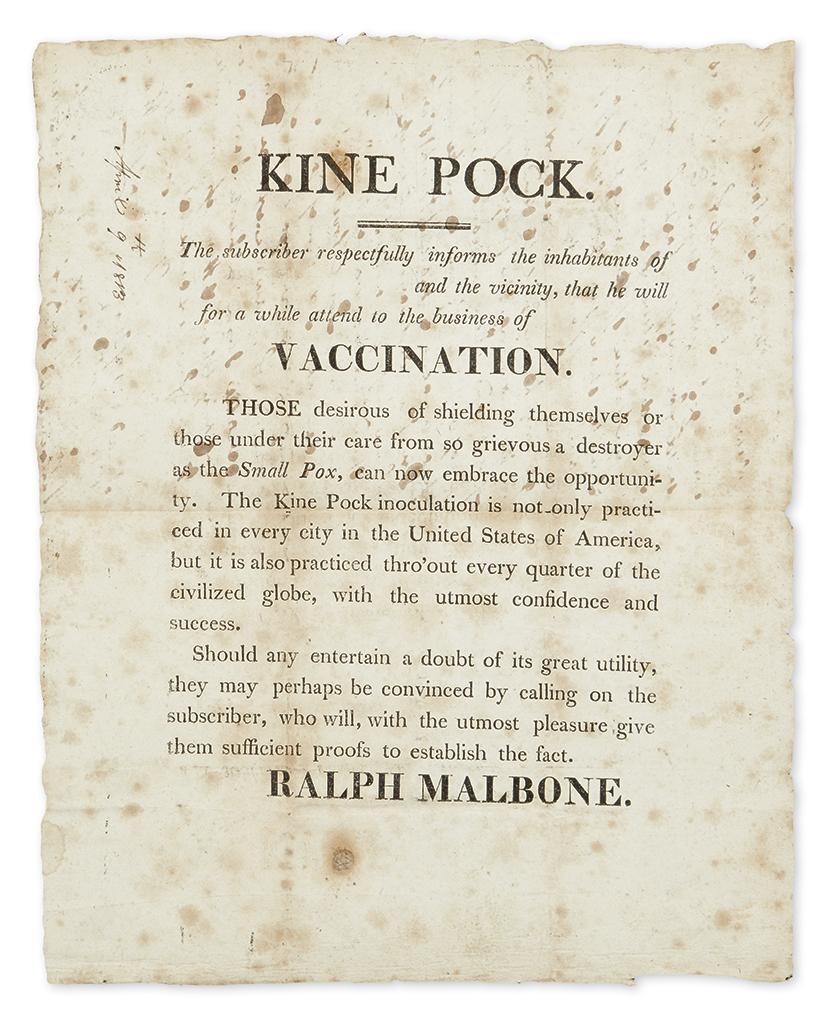