Henry Meigs (1782-1861) was a New York lawyer who served a term as a United States Congressman. For the last years of his life, he served as recording secretary for the American Institute of the City of New York for the Encouragement of Science and Invention, a group of inventors, scientists, and agricultural innovators which remained active through the 1930s and later merged with the New York Academy of Sciences. These volumes are far more detailed--and far more interesting--than any formal minute books. Meigs makes regular entries, sometimes daily for long periods, about the Institute's correspondence, events, and achievements. Reports on crops, interesting new specimens, field trips to farms, forthcoming lectures, memorials of deceased members, and chats with casual visitors all find mention here.
A few examples of Meigs's notes and musings will serve to illustrate the research potential of these volumes. On 28 June 1848, the group welcomed Joseph Jenkins Roberts, first president of Liberia, who reported on his young nation's educational system and agriculture. On 22 September 1848 Meigs reports: "The accounts of the gold region of California, extravagant as they first appeared to be, seem now to be confirmed." In June 1853, Meigs records his lengthy recollections of the foundation of the New York State Library. On 29 June 1853, "John Randall Jr., who admirably laid down the avenues and streets of our city in 1807, called at the repository & renewed observations made in the repository in 1845 relative to his iron elevated roadways for Broadway." He offers his opinion of the World's Fair held in New York at the extravagant new Crystal Palace: "Our trustees, 3 years ago, were of the opinion that this would be the result of the million wasted in the very inconsiderate unenlightened attempt to enchain the public curiosity for so long a period" (4 July 1854). The Institute nevertheless attempted to take on responsibility for the exhibits, and several entries in October 1858 relate to the burning of the Palace. The dangers of steam power were a particular interest of Meigs; he wrote in July 1856 about a new electric motor which will "be superior to all animals for labour, rendering steam, the opprobrious murderous agent more useless and abhorred than rattle snakes!" On 6 December, Peter Cooper reported on the progress of the trans-Atlantic telegraph cable. Meigs complained bitterly about a lecture by the great biologist Louis Agassiz: "Agassiz delivered a lecture for us at heavy charge . . . He gave us not the slightest! Nor in any particular as interesting as those in our own library!" (13 April 1860).
Meigs was adamant in his anti-abolitionist politics, not unusual in New York in those years but now painful to read. John Brown's Raid brought a pro-colonization rant on 18 October 1859, hoping "to send all the Africans back to Africa with our Bible & spelling book & plough in order to rid this only republic on earth of an evil which I prophesied must otherwise soon divide us and give us all the horrors of long civil war" courtesy of "scoundrel politicians who care not a cent for the White." Another rant was inspired by the Republican presidential nomination: "William H. Seward the very embodiment (the corpus) of our modern (soi dissant) patriot . . . is this moment thrown overboard to make way for the poppet of a larger number: Abe Lincoln!" (25 May 1860). The election of "the Black Republican" Lincoln apparently broke Meigs. The next day he made his last entry: "Our good folks flatter themselves that the South will be quiet & not secede! I was born before the Union and may soon see the end of it. H. Meigs" (8 November 1860). He died within months.
Provenance: These volumes were collected by novelist Bellamy Partridge, who featured Meigs as a character in his 1948 historical novel Big Freeze. They are consigned by a Partridge descendant. 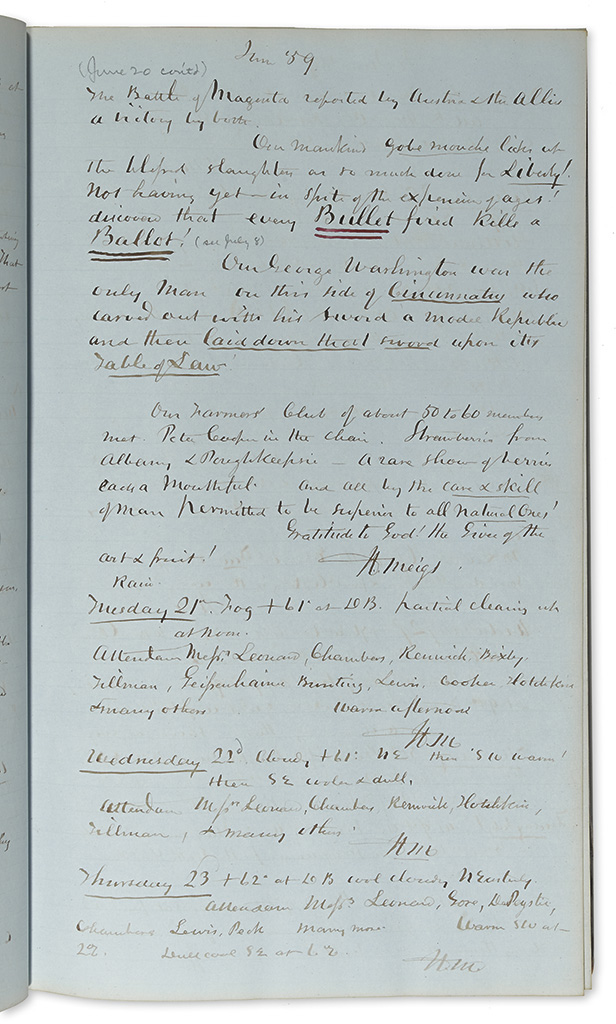