Richard Varick (1753-1831) was a New York lawyer who served as a colonel and aide under generals Schuyler, Arnold and Washington during the Revolution, helped preserve Washington's wartime correspondence, and served as the second post-war mayor of New York from 1789 to 1801. Offered here are two account books from his legal career, both shedding light on his professional connections with his fellow Federalist political allies, and particularly with his mentor and law partner John Morin Scott (1730-1784).

The earlier volume tracks motions and fees for dozens of legal cases from 1763 through 1774, apparently for the prominent New York lawyer and patriot John Morin Scott. Scott's name scarcely appears in the journal, although two inserted receipts from 1769 both detail "register costs from complainants, Scott P compt." Scott is a plaintiff in a case on page 27, and a rare first-person entry on this page reads "I p'd the monies on this decree." On page 48, Scott again appears as plaintiff, this time against future Continental Congress member-turner-Loyalist Isaac Low. A power of attorney given to Scott is affixed to page 56.

The volume is kept in several different hands, apparently by various law clerks who worked for Scott; the bulk of the entries are unsigned. While a student at King's College from 1771 to 1774, Richard Varick served as a clerk for Scott, and then after passing the bar became a partner in Scott's firm. Signatures by Varick as "R. Varick" appear on pages 49, 51 (thrice), and 52, in addition to dozens of notes signed as "R.V." from 1772 to 1774. They document Varick's first employment in the legal field, a humble beginning to a long and distinguished career as one of New York's founding fathers.

This early account book also names several other important New Yorkers. James Duane, later Varick's predecessor as the first mayor of New York under independence, is mentioned several times in his role as clerk of the Chancery Court. The longest and most complex case in the volume is Lewis Morris vs. Peter Van Brugh Livingston, with many dozens of lawyer's filings recorded over most of two pages, 1763-1770 (pages 4-5). Both were prominent patriots, and Morris would sign the Declaration of Independence. Prominent merchants in New York's Jewish community feature in the case of Solomon Simpson vs. Isaac Levy and Moses Franks on page 60.

The second volume covers a much later period, but is also related. Varick's legal mentor John Morin Scott died in 1784. His widow Helena Rutgers Scott Myers (1732-1798) was left in possession of extensive land holdings in the Kayaderossera Patent in and near Saratoga County in upstate New York. She sold off the land in many smaller tracts, usually on credit. She remarried and outlived both of her children, leaving a granddaughter Elizabeth Litchfield Ross (1775-1799) as her executor--but this granddaughter died a few months later. At this point, Richard Varick stepped in to serve as administrator of his late law partner's widow's estate, which was large and complex. This account book, which seems to be largely in Varick's hand, tracks the disposition of dozens of assets, each described briefly and keyed to an inventory (not present). The assets include bonds going back to 1785, mortgages, and especially unpaid debts on land sales from the Kayaderossera Patent. Varick carefully recorded the money due payments received on each one, often devoting a page or more in red and black ink to a single transaction, and signing at the bottom when that asset was retired. It was complex and painstaking work, perhaps somewhat routine for a lawyer. Varick was not a working lawyer at that point, nor was he a retired man of leisure; he was the sitting mayor of New York when this work began. He was voted out of office in 1801 in a wave of anti-Federalist sentiment, and continued serving as administrator of the Scott-Myers estate through its final settlement in 1816.

Among the notable figures in this second account book are James Gordon (1739-1810) and Beriah Palmer (1740-1812), two United States Representatives from the Saratoga area who had served as Helena Scott's agents for many of her land sales in the 1790s; and New York State Senator Abraham Van Vechten (1762-1837), who apparently served as Varick's collection agent upstate. Varick's proper signature appears at the bottom of 29 pages; he writes his own name in the body of the accounts in countless other places. 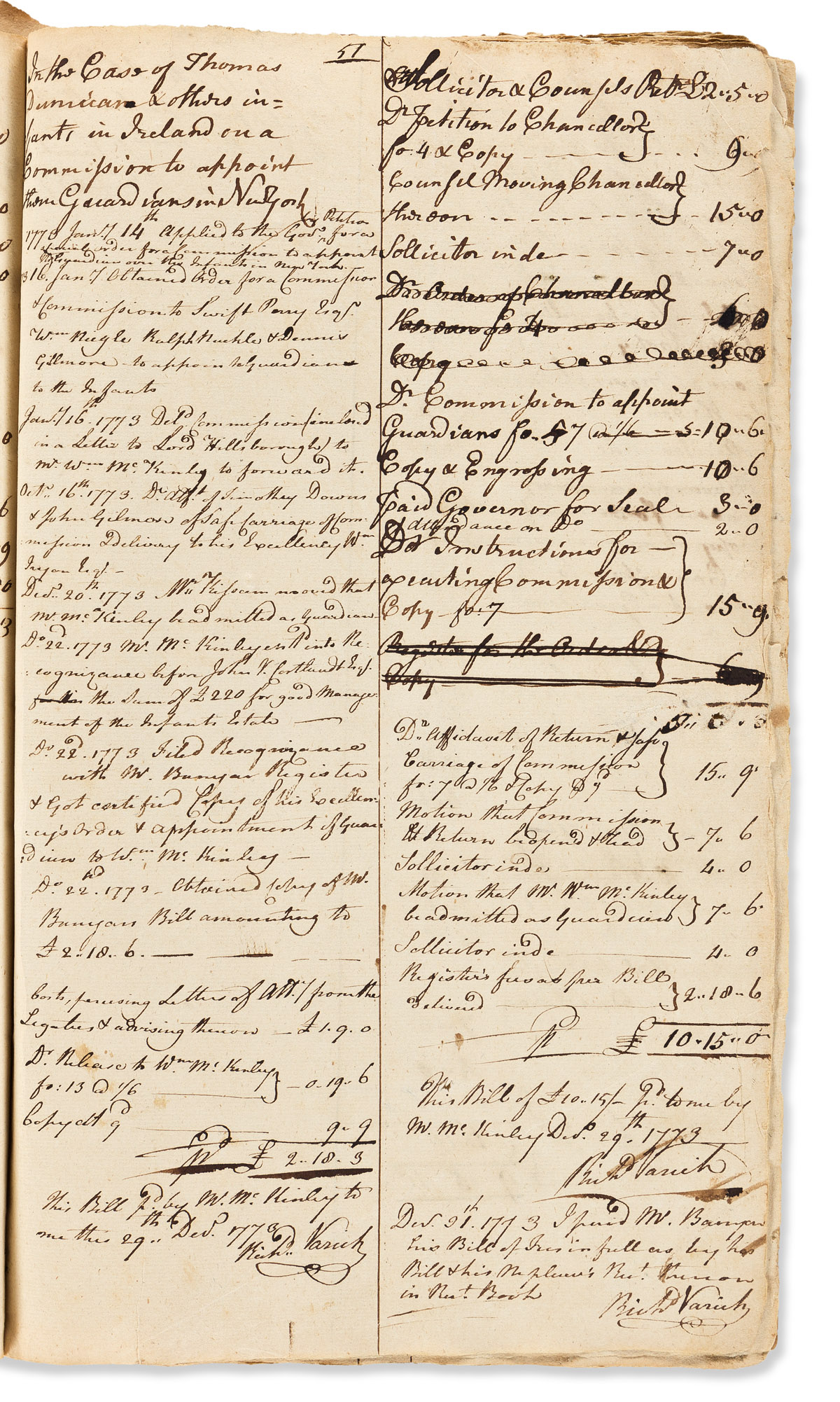