President Wilson's daughter Jessie Woodrow Wilson married Francis Bowes Sayre on 25 November 1913, just a few months after her father took office. This small archive was kept by one of the wedding guests, Dr. DeWitt Scoville Clark Jr., an old friend of the groom. It begins with a letter from the groom, 17 February 1913: "I have a great secret to tell you, Sco. I am engaged to Jessie Wilson, the daughter of Woodrow Wilson. Hardly anyone knows it, and it is not to be announced, probably for several months, so don't breathe a word of it. . . . She's wonderful, and I want you to know her." It is followed by 4 personal Autograph Letters Signed from Jessie (1 April, 25 July, 15 August, 18 November): "I shall always be jealous because you have known him so much longer." The groom followed up on 29 July: "Will you do me the honor to be one of my ushers at my wedding at the White House?" He thanks Clark on 13 August.
The centerpiece of the collection is a very long letter Clark wrote to a friend named "Red" shortly after the wedding: "Altho we had to arrive early, there was already quite a crowd about the gates. We burst thru the latter in all our finery, showed our cards and walked up to the front door, as if we owned the House. . . . I have never witnessed a wedding where I have been so affected by the seriousness and intenseness of the participants." He described President Wilson as "a simple, straight forward going man, with not the slightest sense of his own great importance, yet maintaining the dignity of the position."
The correspondence ends with a final black-bordered letter from Jessie, 28 August 1914, concerning the death of her mother. In addition to this correspondence, the collection includes Clark's invitation to the rehearsal dinner and wedding, with related cards and envelopes (9 pieces total), as well as the gloves, tie, stickpin, and boutonniere worn by Clark at the wedding. 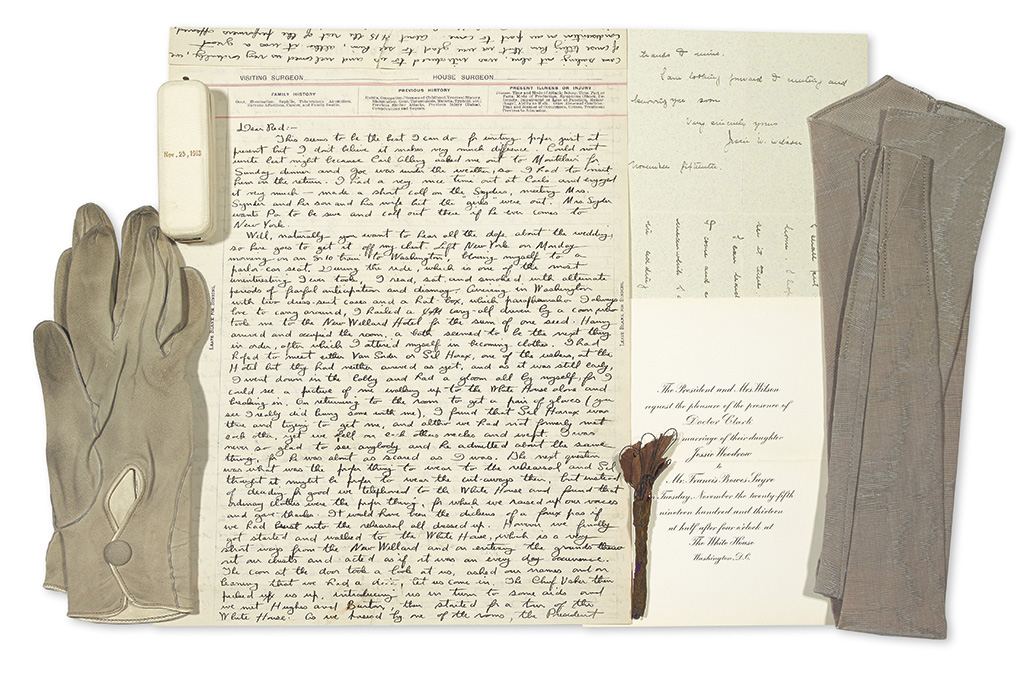