As the Reconstruction period drew to a close, former Confederates grew increasingly anxious to regain control of their state and local governments. The 1876 election was marked by a variety of clashes between Southern Democrats and formerly enslaved people. Although the first incarnation of the Ku Klux Klan had been largely broken up by federal troops, they were replaced by informal "rifle clubs" which intimidated their opponents, and killed dozens. The unrest brought federal troops from the Department of the South under the command of General Thomas Ruger. Two separate state governments declared themselves the winners; furthermore, the tight presidential election depended upon South Carolina's votes as well. The disputed governorship lasted for months. This archive documents General Ruger's efforts to maintain order in the days and weeks after the election. Offered here are 8 documents from General Ruger's files on the election's aftermath. They include:

Contemporary copy of a letter from General William T. Sherman to General Winfield Scott Hancock. "Please instruct the commanding general at Columbia, S.C. [Ruger] to hold his troops ready, to consult with and protect the Board of Canvassers in their duty of counting the votes." Washington, 13 November 1876.

Daniel H. Chamberlain. Autograph Letter Signed as South Carolina's sitting Republican governor to Ruger. "I am fully persuaded that it is necessary to have a guard of U.S. soldiers around my house tonight. . . . There is danger of some attempt at violence tonight, and no protection can be so efficient as a small number of U.S. troops. I dislike greatly to ask this, but I feel there is a necessity for it." Ruger's hastily penciled affirmative response is on verso. Columbia, SC, 28 November 1876.

Official retained copy of a telegram from Ruger to General Sherman, seeking guidance on how to manage the chaos. "The Governor calls on me to eject certain persons claiming to be entitled to places . . . as Democrats. Both parties are now in the Assembly room. In the absence of any riot or violence I have not at once acted. . . . I request . . . that this be brought to the attention of the Secretary of War and President as soon as possible." Columbia, SC, 30 November 1876.

Telegram from General Sherman to Ruger, in response to the above. "Both your dispatches of today were placed by me in the hands of the Secretary of War, who has gone to the President with the Attorney General for consultation." Columbia, SC, 30 November 1876.

Official transcript of a telegram from James Donald Cameron as Secretary of War to Ruger, essentially telling him to continue sorting out the electoral crisis himself. "Telegram received, shown to the President and your action so far approved. If any change in your course is deemed advisable, will instruct you from here. Keep us fully advised." Washington, 1 December 1876.

Official transcript of Ruger's telegram to President Grant. "Much excitement for few days and large number of men in place, some attending State Fair, but most came on account of political situation. Greater part have gone. No doubt members of rifle clubs came, but did not appear on street as organizations or armed. Have learned that arms were brought into city. No open demonstration has been made against state authorities. Threatening talk by individuals on street and about hotels." Columbia, SC, 7 December 1876.

Manuscript list of queries presented to Ruger by F.A. Connor, chair of a committee of the Democratic state legislators. "You are aware that troops are in the state house. Will you be kind enough to inform us by whose authority these troops are in the state house, and for what purpose they are there? . . . Are your troops instructed to resist the peaceable entrance of our House into the hall?" Docketed on verso with a note by Connor: "Gen. Ruger, commanding troops in Columbia, will call for your reply at 1 o'clock." Ruger has hastily docketed the sheet "Handed me by Mr Connor and others on Dec 7th 1876."

Governor Daniel H. Chamberlain. Autograph Letter Signed to Ruger. "I fully concur in your judgment respecting the proper action to be taken in regard to affairs at Timmonsville. If the danger shall be found to be past, I shall be glad to have the necesity of sending troops avoided." This apparently related to the assassination of a Black Republican judge in Timmonsville the previous week, resulting in threats of retaliation. Columbia, SC, 4 February 1877. 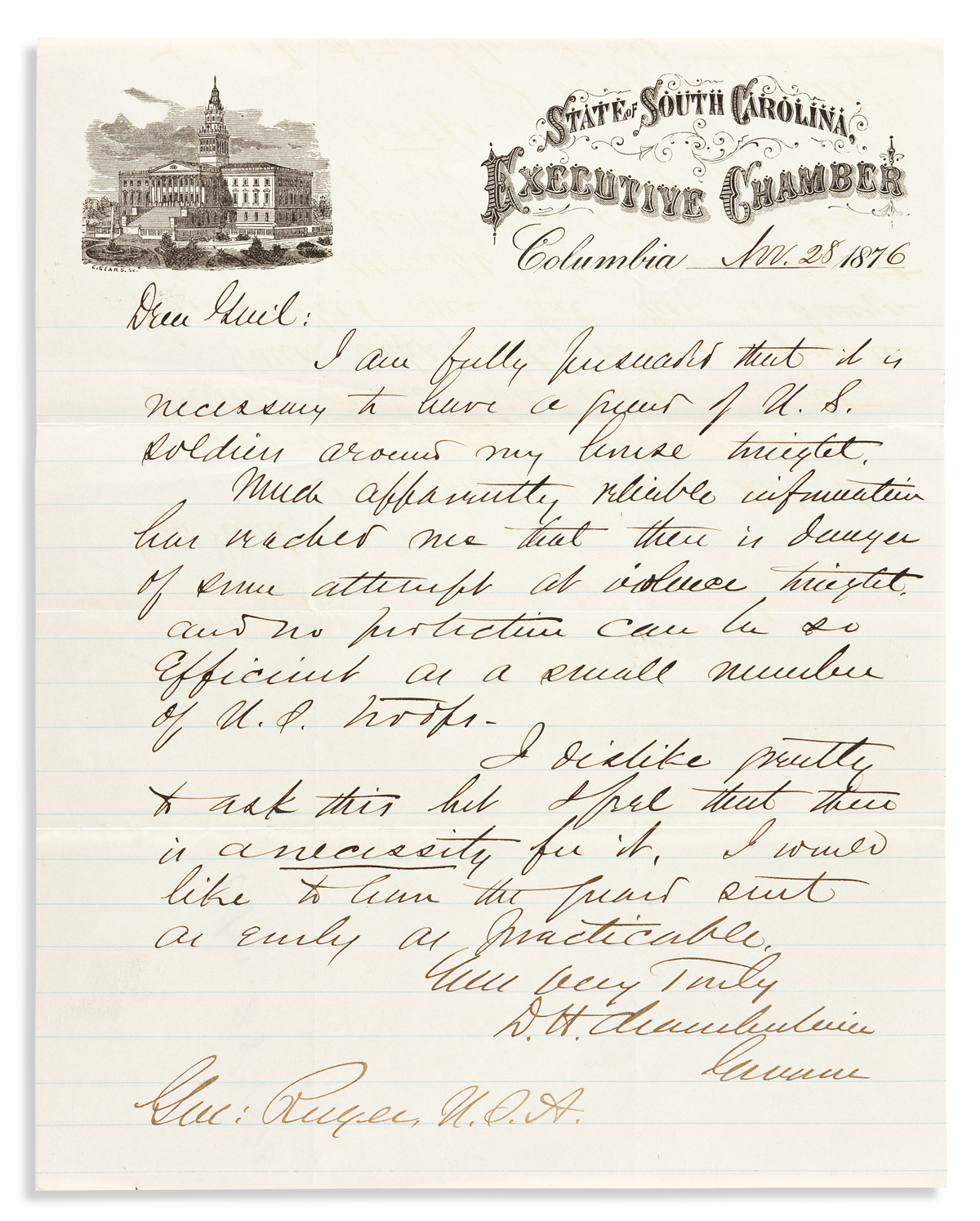