Robert Campbell Dickey (1845-1908) was a New Hampshire native who relocated to Providence, RI in 1866 to work as a watchman and keeper at the Rhode Island State Prison. The prison had been a state-of-the art facility when constructed in 1838, but its tiny cells, tinier isolation cells, and lack of recreation spaces tended to literally drive the prisoners insane. By the time Dickey kept this diary in 1867, the state was already seeking new quarters. The diary makes frequent detailed mention of the prisoners under Dickey's surveillance: their original crimes, their sentences, their violent acts of resistance, and their escape attempts, as well as the occasional lighter moments. While the days of strict solitary confinement for all prisoners had passed, the prison remained an unusually austere place, as Dickey explained: "A man committed for debt . . . seemed very talkative, but was told we did not have much talking here, and he was much surprised, as many others are and have been before" (19 December). Typical entries read: "Mr. Barry was committed yesterday for swindling in gold mine stock to the amount of $200,000, and boards at the capt. table" (2 January); "As I was going outside with some wood, John Reynolds, one of the prisoners, dropped his wood on the steps and run. I started after him, but as he had on no coat and was lightly clothed, I could not come up with him" (19 February); "Dr Briggs committed to jail this evening charged with abortion" (18 October). When a prisoner refused Dickey's order, "I took hold of him and struck him with my cane and after getting him down and choking a little he was willing to be a good boy" (8 June). On 31 January, the inmates enjoyed a dinner of chicken, rice and plums, sponsored annually by a former inmate made good.
That May, a new warden was appointed, General Nelson Viall (1827-1903), who had commanded the state's "colored troops" during the war and then served as chief of the Providence Police. Viall brought interesting visitors; Governor Ambrose Burnside welcomed him on his first day on 1 May. That evening, capitalizing on the commotion of a change in command, "Daniel D. Lee, one of the jail prisoners, went over the wall and got away"; the next morning, a deputy failed to relieve Dickey during a shift change and left him to move 100 prisoners: "Nothing but the power of God kept us from a general riot" (2 May). On 12 May, the minister invited prisoners to stay for singing practice after services: "quite a lot wanted to . . . and nearly all the niggers, but the Genl. sent some down and thought it not best to have singing school every week." Viall soon established order; on 9 June, he told Dickey about a planned breakout but ordered that it should proceed. As the prisoner went over the wall, "just then the General stepped out and fired his pistol at him. He was so much frightened he dropped down and begged not to be shot. Quite a number of prisoners saw it done and thought he was badly hurt" (10 June).
The diary also includes good detail on life in Providence; Dickey attends baseball games near the prison on 30 May and 13 June. On 17 July, "Have a chance to take some air and see the handbills of theatres, nigger shows, street walkers." Dickey returned to Derry, NH a few years after writing this diary, where he raised a family and worked as a pharmacist. The prison was abandoned in 1878, demolished for a state college satellite campus, and then used as a rubble-strewn parking lot in the shadow of the state capitol building. An archaeological dig on the site in 1997 brought a flurry of renewed interest to the haunted site; it is now occupied by the north end of the massive Providence Place Mall, rarely contemplated by the diners at the Cheesecake Factory. Additional extracts from this remarkable record of prison life are available upon request. 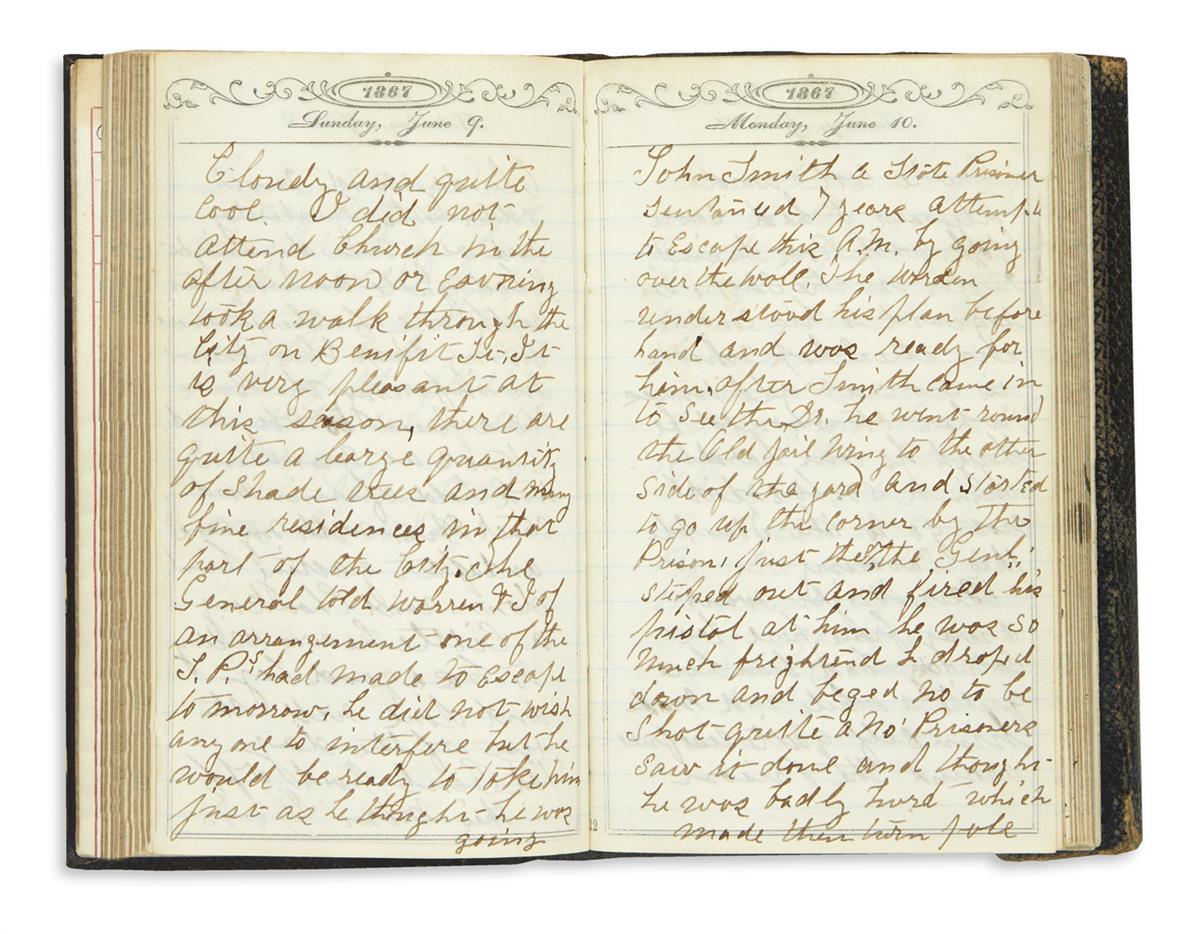