Theodore Roosevelt. TLS: ". . . I am immensely amused at what you tell me about the reactionary manufacturers and my tariff deliverance. You must have grinned when you saw it, having in remembrance who inspired the said utterance!" 1 page, 4to. New York, 31 January 1913 TLS: ". . . . I cannot resist telling you of something I hear said about you and me . . . . [:] 'Mr Van Valkenburg and Col. Roosevelt are the only two men I have ever known who, when asked to go on in the fight for decency, do not respond "Oh! what's the use?"' . . . ." 1 page, 4to. 30 August 1913 TLS: ". . . From Indiana west the Progressive Party has its roots deeply down and I think it is possible that the situation may turn in our favor here in the east. . . . But we cannot be sure that the Party as a party will continue." 1 1/2 pages. 11 December 1914 Brief ALS: ". . . In my speech also I have tried to strike the note of serious devotion to our country's welfare." 2 pages. Sagamore Hill, 12 January 1916 TLS: "I am very glad to see that speech of Gompers. In my next speech I shall take up the joint control of our foreign affairs by himself and Wilson. . . ." 1 page. New York, 7 October, 1916 ALS: ". . . What you said about me touched me deeply . . . . [Y]ou speak of my as I should like to have my childrens children believe I was entitled to be spoken of." 1 page. Sagamore Hill, 8 November 1916 TLS: ". . . [The editors of the Kansas City Star] think that some of my articles about Mr. Wilson and the war are too strong . . . . [M]y whole concern at this time is practically the same concern that Amos and Micah and Isaiah had for Jerusalem nearly three thousand years ago! In those days a prophet was very apt to get himself stoned. Nowadays he merely excites the ire of the persons who would otherwise read the magazines or newspapers in which his prophecies appear. . . . I am quote prepared to feel that now that I am in my sixtieth year it would be to the interest of everybody that I would cease being a prophet and become that far pleasanter and more innocuous person, a sage. . . ." 2 1/4 pages. [Kansas City], 23 April 1918 ALS: ". . . [Y]ou are on the whole the most useful public servant this country has had during the last four years. . . ." 2 pages. Sagamore Hill, 29 April 1918 others.
Edith Kermit Roosevelt. ALS: ". . . After many difficulties & much 'doubt hesitation and pain,' on the part of the government I have been given a passport and leave shortly for France to fulfill Theodore's wish and make certain arrangements about Quentin's grave. Please don't forget how very much Theodore cared for you & all that you meant to him & to the country." 4 pages. [New York], 26 January [1919] ALS: ". . . The stand you have taken on the Columbian Treaty is splendid. . . . In any case I am not thinking of Theodore 'malice domestic nor foreign levy' can touch him further. It is one country for which I suffer." 2 pages. Sagamore Hill, 7 April 1921.
Archibald B. Roosevelt. TLS: ". .. [T]he editorial on Colonel Roosevelt's personal aspirations and ambitions and the poem on January 8th were both, in the estimate of his family, the most remarkable summing-up on the life of my father." 1 page. Oyster Bay, 23 January 1919.
with--Over 30 pages of letters (from secretaries, journalists, and others to Van Valkenburg concerning Roosevelt), and printed matter (enclosures, Van Valkenburg's retained copies of letters to Roosevelt, etc.) including two tickets to Roosevelt's funeral at Christ Church in Oyster Bay on January 8, 1919.
Edwin A. Van Valkenburg (1862-1932) was editor of the Philadelphia North American, an influential Republican and Progressive daily, between 1899 and 1924; in 1908, he managed Taft's presidential campaign in Pennsylvania. Van Valkenburg and Roosevelt shared a mutual distrust of Taft after he became president, which drew them to each other. 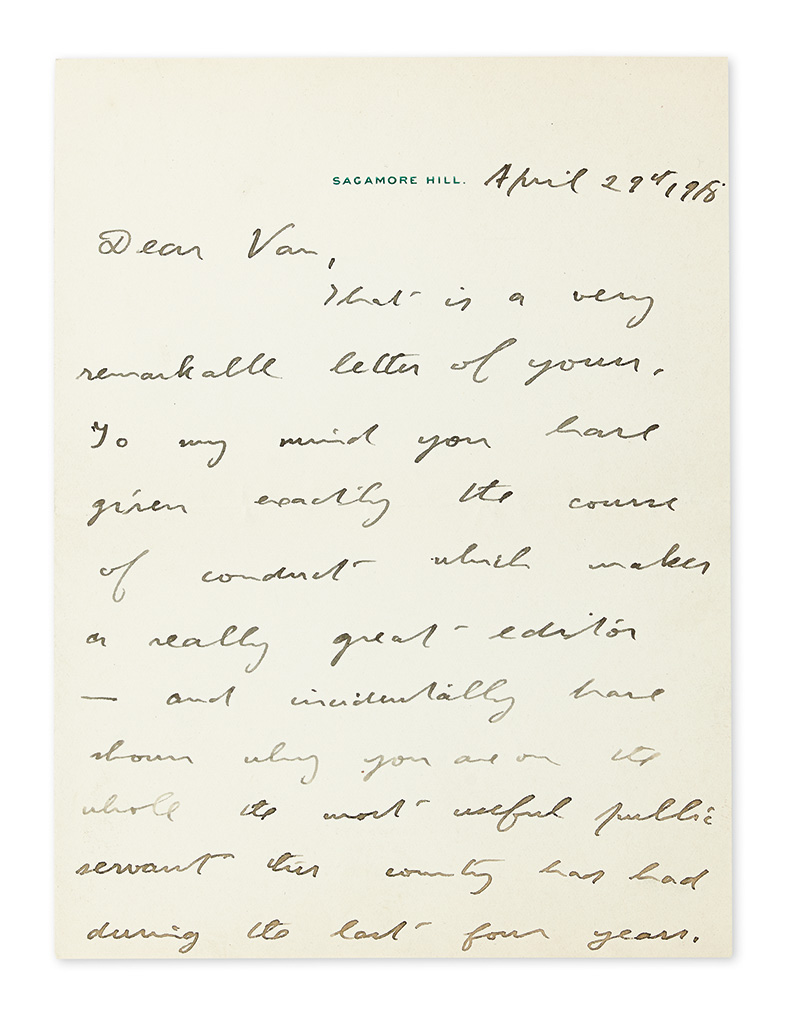 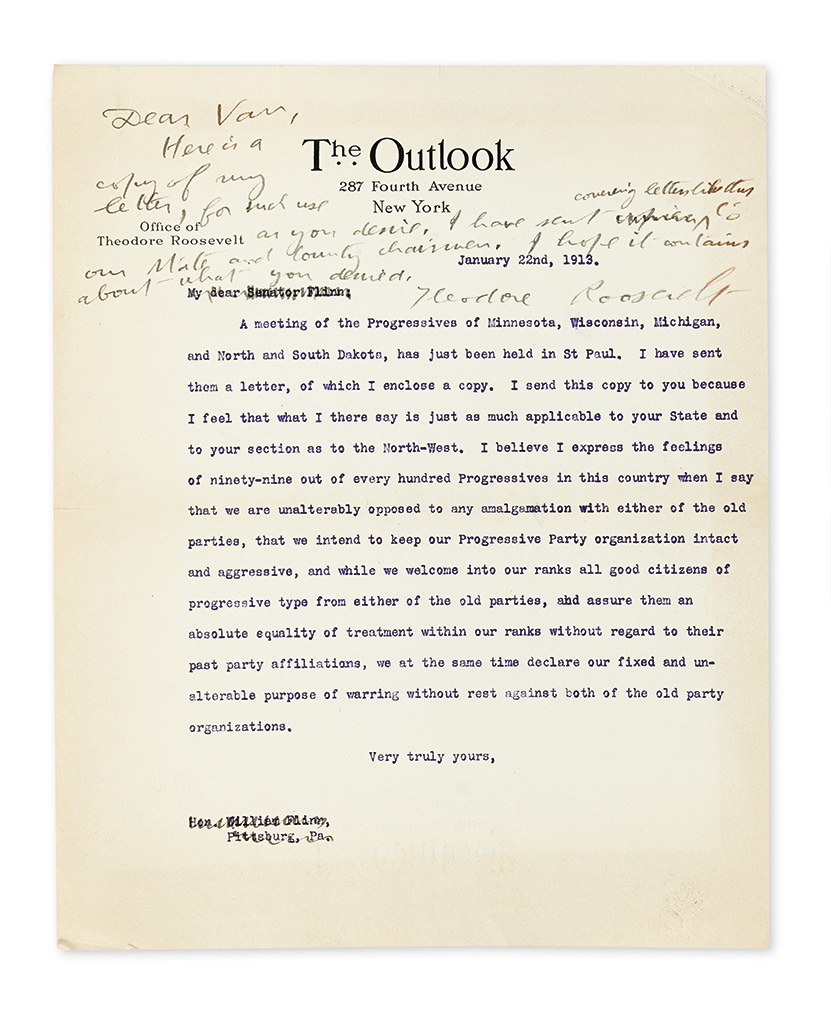