An unusually rich compilation of pamphlets, most of them on scientific topics. Perhaps the most important is Robert Fulton's scarce pamphlet "Report on the Practicability of Navigating, with Steam Boats, on the Southern Waters of the United States, From the Chesapeak to the River St. Mary's (New York, 1813); none have been traced at auction, and only 5 have been found in institutions. This copy bears a gift inscription from Fulton associate John Devereux DeLacy. Another scarce work, with only one copy in OCLC, is also sometimes attributed to Fulton: "Invincible Floating Batteries" (New York, 1813). At least three of the pamphlets bear ownership inscriptions of Ferdinando Fairfax (1766-1820), a wealthy Virginian who was the godson of George Washington. Fairfax was a patron of William Thornton's failed efforts to defeat Robert Fulton with his own steamboat patent. Three of the pamphlets are authored by Thornton, on various topics. Most notable is his "Outlines of a Constitution for United North and South Columbia" (Washington, 1815). The collection also includes a pamphlet by Fairfax which brings these themes together: "Memorial . . . against the Extension of the Patents Granted to Robert Fulton, for improvements in Propelling Vessels by Steam" (8 pages, Washington City, 1816).
Other highlights include: Strickland, "Observations on the Agriculture of the United States of America" (London, 1801) Blanchard, "Journal of my Forty-Fifth Ascension, Being the First Performed in America," incomplete but with frontispiece ballooning plate present (Philadelphia, 1793) Varle, "Topographical Description of the Counties of Frederick, Berkeley, and Jefferson, Situated in the State of Virginia," lacking map (Winchester, VA, 1810) "Articles of Association of the Bank of Potomac," one copy in OCLC (Alexandria, VA, 1805) Moore, "An Essay on the Most Eligible Construction of Ice-Houses, also a Description of the Newly Invented Machine Called the Refrigerator" (Baltimore, 1803) and Munro, "A Description of the Genesee County, in the State of New-York," with map (New York, 1804).
Ferdinando Fairfax did not sign the binding, but his signature appears on three title pages, many reflect his known interests, and they were bound in the early 19th century. The front pastedown is signed by a Confederate soldier, John P. Yowell of the 12th Virginia Cavalry, and the rear pastedown by Eliza Moreland. A more detailed inventory of the contents is available upon request. 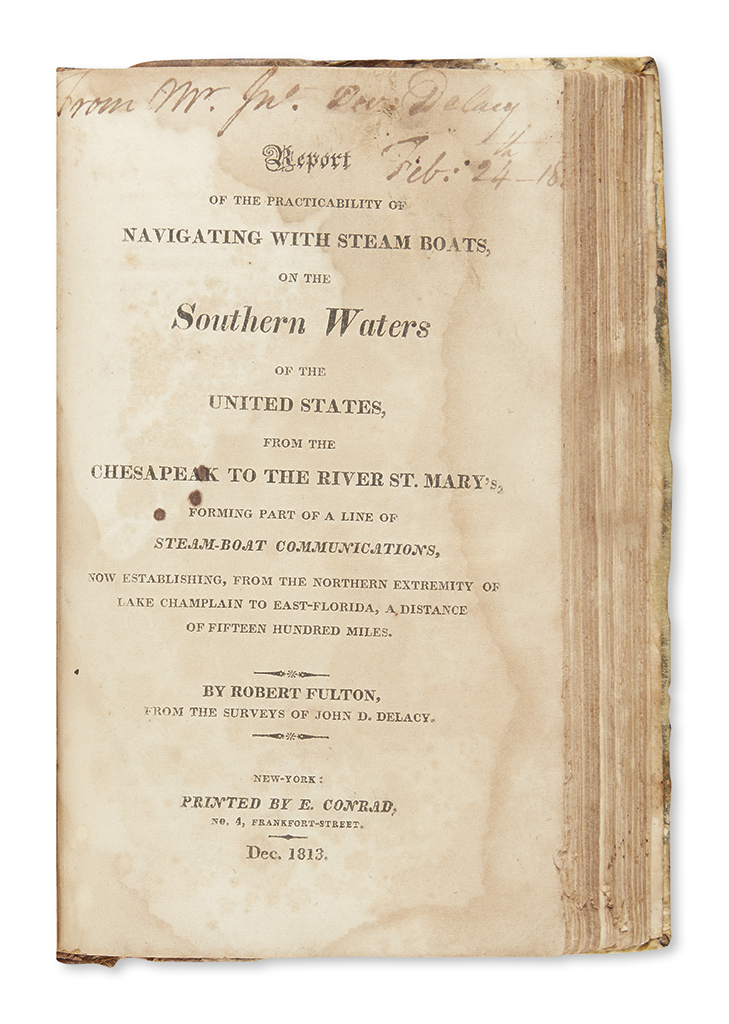