Unsold
Estimate: $ 5,000 - $ 7,500
INSCRIBED TO WILLIAM WELLS BROWN (SLAVERY AND ABOLITION.) ARMISTEAD, WILSON, Compiler. A Tribute For the Negro; Being a Vindication of the Moral, Intellectual and Religious Capabilities of the Coloured Portion of Mankind . . . Frontispiece and nine additional full-page engravings. 564 pages with engraved borders, four pages of publisher's advertisements at the rear. Tall, thick 8vo, original gilt-pictorial green cloth, expertly re-backed with the original spine laid down. Manchester, 1848

first edition, cloth issue. an exceptional association copy, inscribed by the author to william wellls brown: "To William Wells Brown, with the author''s best wishes, Leeds, 1st mo. 12, 1850." William Wells Brown (1815-1884), author, novelist, playwright, historian and abolitionist leader, was born in Lexington, Kentucky, the son of a slave, and his owner''s half brother. Brown escaped from his owner in 1834, and after several moves settled in Boston. In 1848, Brown published his "Narrative." This brought him to the attention of his ex-master Enoch Price who offered to free him for the sum of $325.00. Brown however refused, saying "God make me free, as he did Enoch Price, and Mr. Price shall never receive a dollar from me or my friends with my consent." As a result, he was forced, as was Frederick Douglass in a similar situation, to flee to England. While there, Brown published "Three Years in Europe" (1852) and "Clotelle," (1854) the first novel by an African-American author.
In England, Brown met with many of the noted British abolitionists, among them, Wilson Armistead of Leeds. Armistead had devoted 8 pages (541-549) to Brown in his "Tribute for the Negro," discussing his "Narrative" at length and reprinting an article by Brown which had appeared in "The Liberty Bell." Armistead''s "Tribute" is without question the most elaborately written and produced anti-slavery book of the period with its fine portraits and engraved page edges. The first fifteen chapters (181 pages) of the "Tribute" consist of articles establishing and reinforcing the intellectual capacities of the Negro. The second part contains scores of biographical sketches and excerpts from narratives and books on the Negro. The engraved portraits include Toussaint, Olaudah Equiano, James Pennington, Frederick Douglass, Cinque, and Jan Tzatsoe, a chief of South Africa. 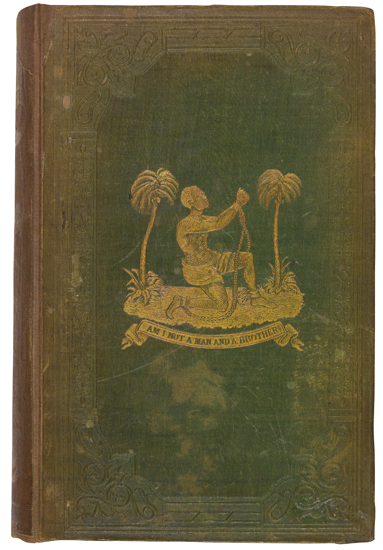