John Augustine Washington III (1821-1861) was the great-grandnephew of George Washington and the last private owner of Mount Vernon. By 1841, when Mount Vernon came under his care, the estate was in decline. He approached both the federal government and the state of Virginia with a plan to turn the estate into a national shrine, but to no avail. In 1858, he sold the main house, a few smaller structures, and the family tomb to the Mount Vernon Ladies Association. The family relocated to Waveland Plantation in 1860. At the outbreak of the Civil War, Washington joined the Confederate Army as aide-de-camp to his relative by marriage, Robert E. Lee, and in September 1861, he was shot dead by a Union sniper.
Offered here is a substantial archive of correspondence relating to Mount Vernon and the other Washington family estates--much of it relating to the enslaved people held by the family. Written over the course of several decades, these letters trace the lives of the family slaves, recording their illnesses and woes, travels between the plantations as they were shuffled around amongst family members, and their hiring out to work elsewhere. The bulk of the letters present here are written to John Augustine Washington III from his mother Jane Charlotte Blackburn Washington (1786-1855). After her husband's death in 1832, she had taken control of the estate, and split her time between Mount Vernon and her estate at Blakeley (now in the far eastern tip of West Virginia). She leased the Mount Vernon estate to John Augustine III in 1841, formally passing ownership to him in 1850. She complains regularly to her son that the servants do not obey her. Throughout her letters, she relays details of plantation life for both the white and black populations at Mount Vernon and Blakeley.
In a letter dated 22 May 1843, she writes: "It seems Mr. John Selden is anxious to purchase Harriet. She was appraised at $400 with her child. She is said to be an excellent servant, & if you can get her in place of Hannah, Julia, or Sally, I think you had better do so. Julia is now at Blakely, having laid up & then come off without Lake's permission. Richard informed me that Lake has been to look her up, but says he has rather she should not be sent back. Dr. Cordell has been called out to see her twice & from his prescription I rather suppose thinks very little except hysteria ails her."
Jane writes the following month: "I am sorry to say Julia is again laid up, and although no one seems to think much ails her, I yet do not like to say that no cause exists for her frequent sicknesses. The servants are becoming more & more worthless & disobedient. I really find it very difficult to govern them, or to have the most necessary domestic work attended to with any regularity. It is no doubt owing to my want of health and not being able to give my personal attention to business" (13 June 1843).
This lot also includes 13 letters from George Mason to John Augustine Washington III. George Mason (1797-1870) was the grandson of George Mason IV of Gunston Hall (author of the Virginia Declaration of Rights and namesake of George Mason University). The two men were friends and neighbors. One letter in particular stands out, describing a drunken man of color who trespassed and caused a disturbance on his estate. When questioned, the man dropped the name of the most famous of Mount Vernon's enslaved people: "I suppose you have a name, & can tell me, what Mr. Washington you belong to? He replied 'West Ford.' His manner was insolent & supposing he was drunk, I said to him, there is the road to the gate, go off my place at once. . . . When he got to the corner of the house, he commenced whooping & continued doing so, till he got out of the gate, which I had to send & have closed after him. I said nothing further to him, as he was obviously drunk; but directed one of my servants to go & tell him never to put his foot on the place again; after which, he continued whooping & yelling up the road, for some distance. Had he been anyone's servant but yours, I shd. have immediately had him apprehended & flogged for his impertinence." Mason also shared a story about a "strange Negro" who had kicked his children's pet colt: "I found that it was this very fellow West Ford, who has thus behaved, & that his companion was his brother Joe." West Ford (1784-1863) was perhaps the most well-known of the Mount Vernon slaves. Oral history asserts that he was the son of George Washington. He was manumitted circa 1805 and became a substantial landowner in the area; by 1858, he was in poor health and probably too old to be harassing the neighbors. Mason's trespasser may have been one of West Ford's children or grandchildren--or somebody just using his name.
This archive is full of detail on Mount Vernon and the heirs of America's Founding Father--and particularly on the enslaved people on whom their fortune was built. 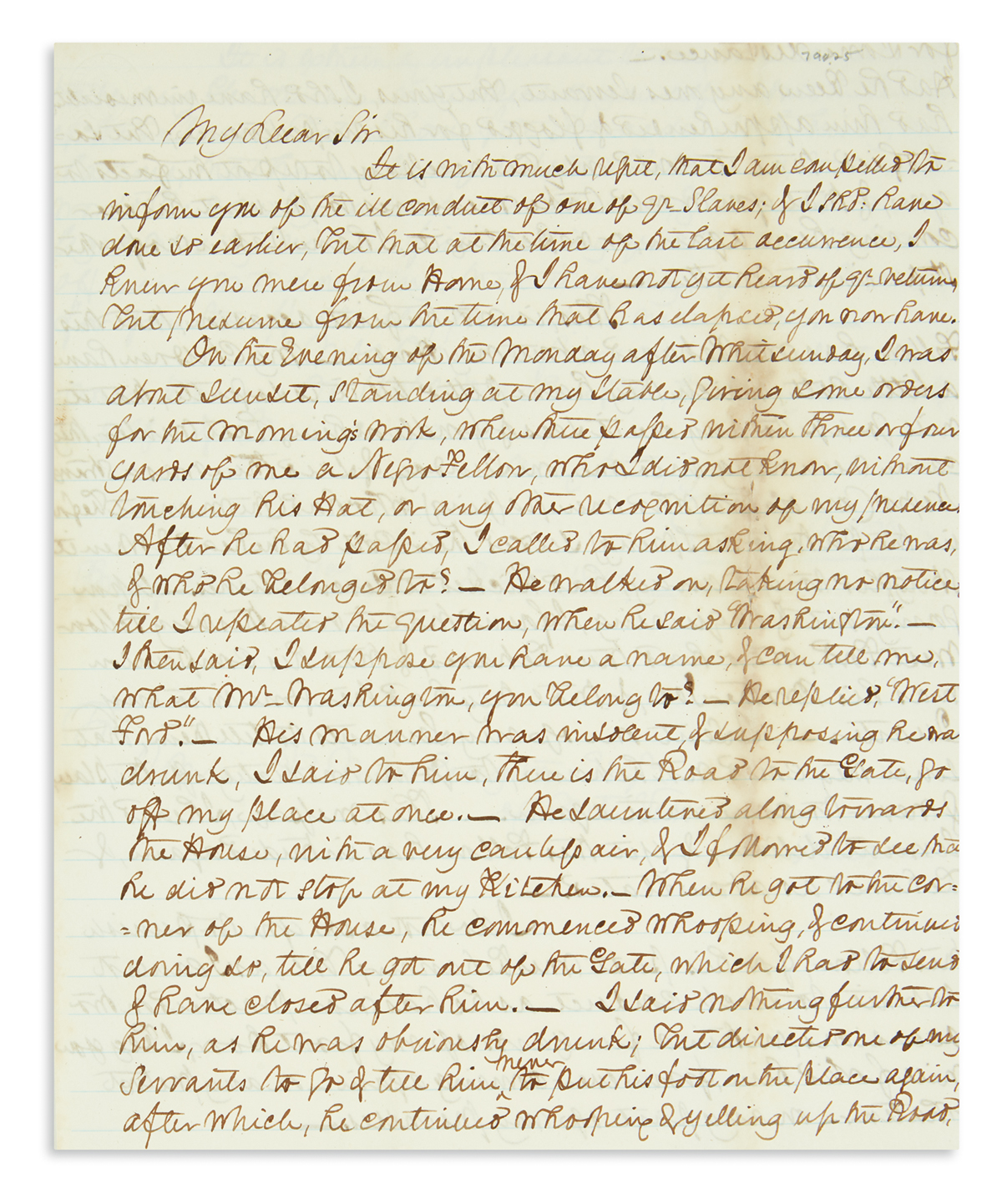