Letter from Obed Waite to Colonel Samuel Jones of Washington, DC announcing that "negro Sam Lee left this place some time before Christmas and has not returned. . . . I am not certainly advised who Sam does belong to." Winchester, VA, 6 January 1829 Letter from Thomas Mead to Frederick Carper of Fairfax, VA. "Negro hands have been hireing high in this section. . . . Negroes has been selling finely." Regarding white canal laborers from Pennsylvania, "they are a motley crew, if we do not proclaim martial law, we will have to keep up lynch's law in the neighbourhood." Lynchburg, VA, 14 January 1836 Letter from T.W. Dorman to Rev. Henry Furlong of Abingdon, MD, discussing his desire to locate further south despite it being "densely settled with black and Indian population." Middleburg, VA, 27 May 1836 Deposition of Louisa Luckett concerning the ownership of "a girl about three or four years of age named Betsy Parker," signed by future Confederate general Asa Rogers as witness. Loudoun County, VA, 16 June 1838 Minutes of the Clark County Democratic Meeting, including a resolution that "efforts of the abolitionist or others made to induce Congress to interfere with questions of slavery . . . are calculated to lead to the most alarming & dangerous consequences." Waterloo, VA, 8 June 1840 Letter, Charles C. Stuart of Chantilly Plantation to Dr. Bell. "I could have sold the negroes, but it could not be done for cash in this county. . . . Hired them to Mr. Hofman who will take good care of them, and pay you punctually. "Island" (VA?), 12 January 1855 Letter from James Grantham to John W. Luke. "Asked the jailor what he would take and relieve me of Henry. He said he would do it for 250$. . . . Henry seems no better, he may live a good many years and it will cost me 200$ at least in his present situation pr year." Np, 9 April 1856 Bond regarding a lawsuit between Fenton Jackson and William B. Walter over "a certain slave girl named Louisa." Frederick County, MD, 2 February 1859 Arrest writ against Charles Spears for the crime of "Trading with slave," Lawrence County, AL, 7 June 1860 Letter, John Fletcher to Hamilton Gibson of Newtown, VA. "I am not willing to pay $500 for Susan, although I would like very much on Bill's account to purchase her." Upperville, VA, 13 September 1860 Letter, E.C. Fitzhugh to John W. Luke. Regarding slave Sandy, Dr. F. "does not consider him worth the clothing we have to give him & he is in constant danger of committing some blunder. . . . He put a running noose or slip knot on the neck of his favorite mare. . . . He is constantly breaking into different houses in the neighborhood." Evergreen, VA, 10 August, undated. 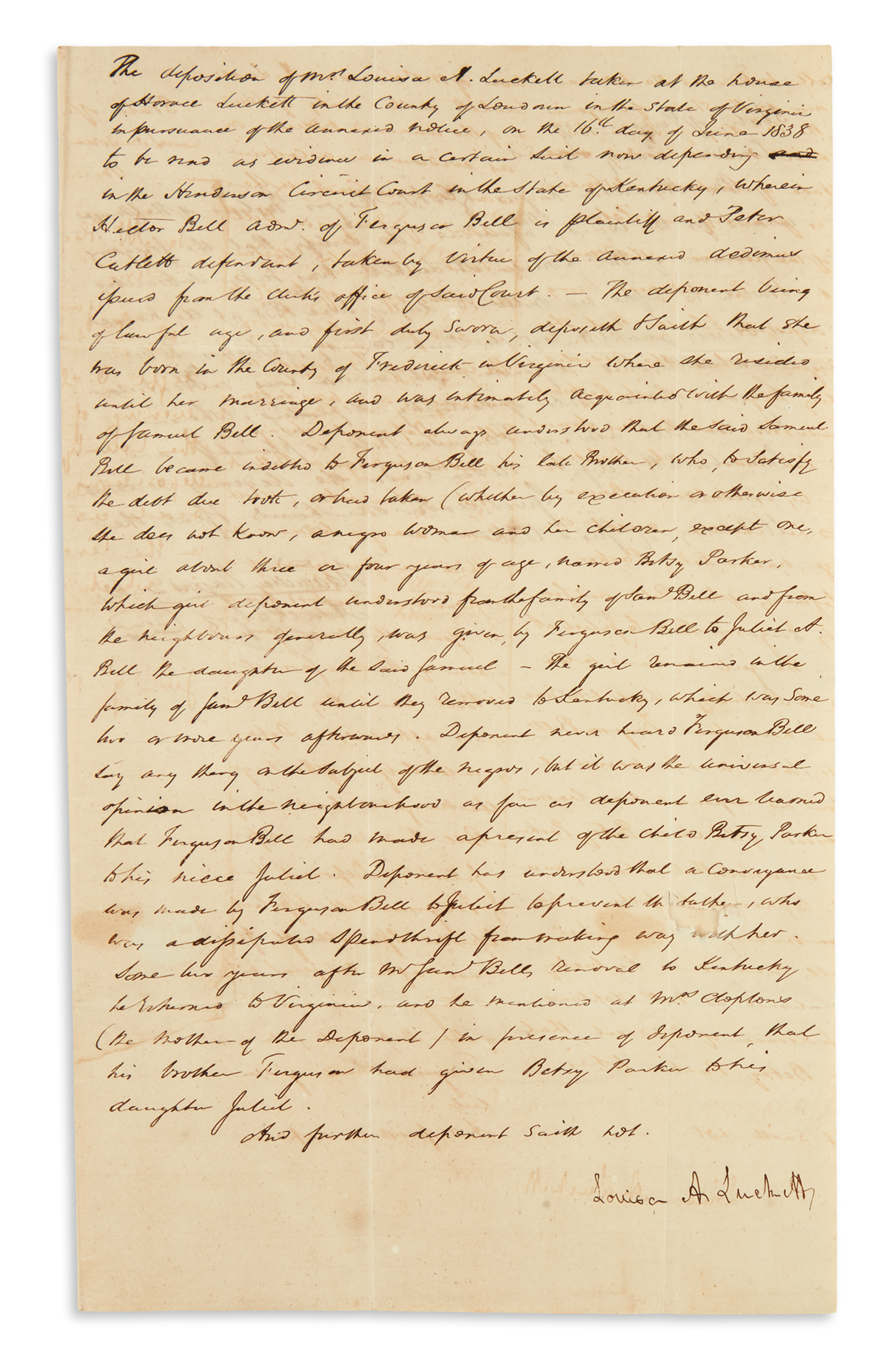