Marcus Claudius Marcellus Hammond (1814-1876), West Point graduate and one term South Carolina legislator, formed a business partnership with Thomas Davies (1830-1902) in 1856. Around the same time, Davies' sister married Hammond, and the two families thus owned considerable property together. The present Bible, recording the births, deaths and marriages of their slaves provides a valuable insight into the lives and deaths of these slaves, with some records reaching well into the Civil War years. From a careful examination of the handwriting, the earliest entries in this Bible seem to be in one hand, quite likely that of Marcus Claudius Marcellus Hammond, with the later entries by both M.C.M. Hammond and Thomas Davies. The Bible was in use for 23 years, and it is quite possible that more than two hands were involved. The use of a Bible to keep track of their chattel is consistent with the paternalistic and evangelical Christian attitude of many slave-holders. Thomas Davies's entries seem to be those of a man who genuinely cared about his slaves.
In one instance, Thomas Davies writes: "On the night of January 23rdat the late residence of W.W. Starks, Esq., [died] Dinah, mother of Peter. Her age was remarkable. She was owned by M.C. Hammond, Esq.,and sold with others to W. H. Baldy, Esq., and by him, allowed to live with me in 1850. Since then, she has had her freedom, having been a child of my grandmother's and hence my attention to her in the decline of her life. She was a nobal (sic noble) ninety years of age, was buried at Malvern. Died of old age." Entries of this sort are common,with remarks about the person and the manner of their death. "Isaac Gardner . . . was killed by the night train to Charleston. He had been to Hamburg frolicking . . . supposed to have been drunk." A later, Civil War entry reads: "Arch, about 70, died at Malvern, November 1st, 1863. He was a slave of my father, Tho. W. Davies and received a wound crushing his ankle coming out from Mississippi-a fugitive from the accursed Yankees. The wagon wheel passed over his ankle." There are at least three main plantations mentioned in the entries and several others are cited in passing. Marcus Claudius Marcellus Hammond's brother James Henry Hammond (1807-1864) governor of South Carolina was a noted, if not notorious slave-holder.
This Bible's register, and the additional leaves filled with the names of men, women and children, their births, their marriages and their deaths, represents a lamentable part of the collective American experience. However, its pages can provide us with an invaluable genealogical record.
In addition to being a planter, Davies provided financing and slave labor for firebrick and kaolin pottery factories in South Carolina. His factory supplied bricks for building Confederate munitions plants and vessels for use in Confederate hospitals; and the kaolin clay from his mine was used by slave potters to create face jugs, a type of pottery that is of considerable interest today. 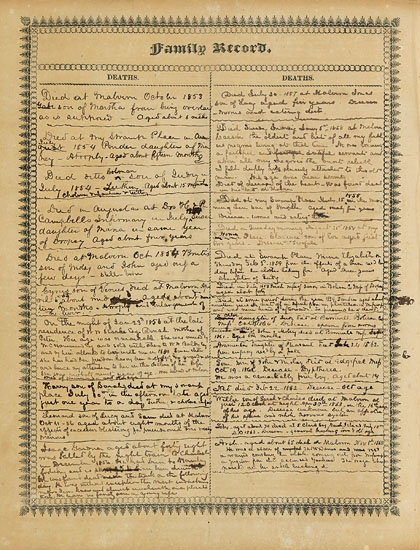 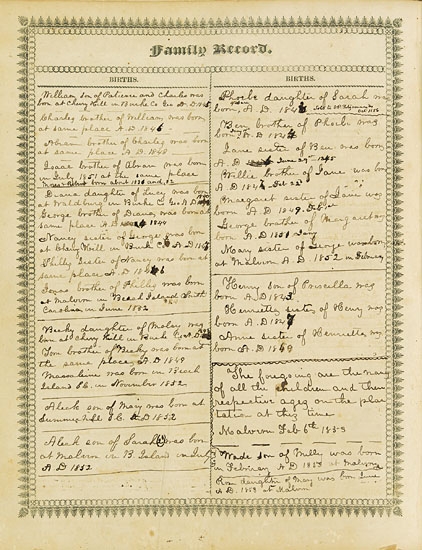 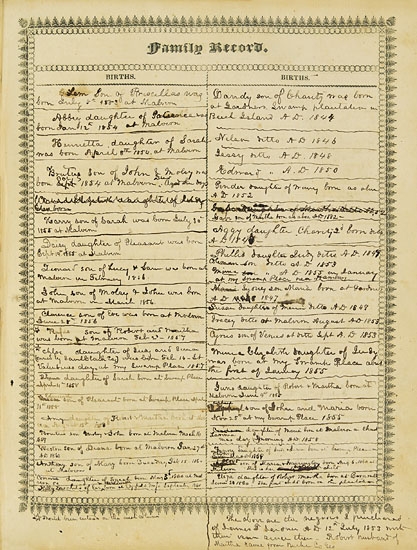 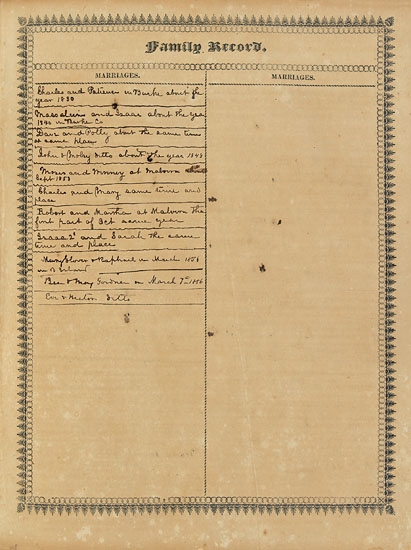