Price Realized: $ 11,000
Price Realized: $ 13,200
?Final Price Realized includes Buyer’s Premium added to Hammer Price
Estimate: $ 5,000 - $ 7,500
AN EXCEPTIONAL MANUSCRIPT ARCHIVE (SLAVERY AND ABOLITION.) Important archive of material relating to the capture of the Portuguese slave ship Victoria. Vellum log-book, (7x5 inches) 35 pages, with text on the first 16, some of the text with pencil translations in English; a deposition (small folio) of three freed slaves, signed before a British magistrate in Sierra Leone, and a "receipt" (small 4to) for the return of 434 slaves from the ship "Nostra Senhora da Victoria," signed by the marshall, G. Macauley. should be seen. Sierra Leone, 1814

an exceptional grouping, including the slave captain''s log-book. The Victoria, a Portuguese slave-ship bound for Maranhao was captured off the West Coast of Africa by the British ship H. M. S. Princess Charlotte. Aboard were 434 slaves: 213 men, 99 women, 80 boys and 42 girls. Captured with the ship and slaves was the captain''s log for this voyage, signed by him on the last page, Ricardo do Joze de la (illegible). A slender volume, bound in vellum, the title-page reads "book of the cargo sent from Bissao (Guinea) to Maranhao on the ship Victoria, Captain Ricardo Jose, in the year 1814." The entries apparently comprise a "shopping list" from planters in Brazil: "C. Joaquin Antonio de Mattos. 5 men, 2 women, one boy, one girl," with the sums of money paid. Next to each transaction is the monogram, or brand of each planter and the "freight fees." On one page is the notation "one man dead." The deposition, made at the Colony of Sierra Leone by three natives reads: "Came before me Robert Purdie, Esq. Judge of the Court of the Vice Admiralty, Sierra Leone . . . Obden, a native of Sien, Wallee and Hamet (Mohamet), natives of Salum, both in Joliff Country, Africa who being duly sworn make oath and say that they were bought at Sien from a native man by Francis La Porte, an inhabitant of Goree who sent them by his servant Ali Lo . . . and a number more to Bissao. . .and put them on board the Portuguese ship Victoria as Slaves." The "receipt" itemizes the slaves, men, women, boys and girls, and is signed by the Marshall, presumably at Sierra Leone. 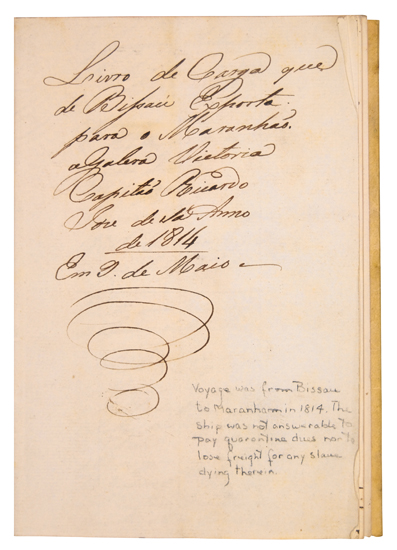