Price Realized: $ 17,000
Price Realized: $ 21,250
?Final Price Realized includes Buyer’s Premium added to Hammer Price
Estimate: $ 12,000 - $ 18,000
"I TOLD HIM THAT HE COULD NOT WHIP ME" (SLAVERY AND ABOLITION.) Letters concerning Gabriel Johnson, an enslaved man at Mount Vernon--including his letter from Bruin's Slave Jail. 4 letters by various authors, all to or from John Augustine Washington, each 1 to 3 pages in length, two with integral address panels and postal markings; mailing folds but otherwise minimal wear. With complete transcripts of all 4 letters. Vp, 1842 and 1845
Set Alert for Similar Items

Gabriel Johnson (1820-after 1900) was born into slavery at the Blakeley Plantation in Jefferson County (now West Virginia), owned by the Washington family. In 1841, he was transferred along with his mother to Mount Vernon, the home of the late president George Washington. Mount Vernon had just been leased by the widow Jane Charlotte Blackburn Washington (1786-1855) to her son John Augustine Washington III (1821-1861)--the great-grand-nephew of President Washington.
The first letter in this collection is from John Augustine Washington to his mother, Mount Vernon, 7 March 1842. Just months after he had assumed control of Mount Vernon, he wrote: "A day or two since I wrote very hastily to inform you that Gabriel had gone off. . . . He seems to have taken away none of his clothes but those he had on & from what I can learn, he could not have had money. . . . The road to Jefferson being the only one he knew, I think it most probable that he has directed his course there & it will be all-important to try & prevent his crossing the river & I have no doubt that his views are towards Pennsylvania." Washington then pondered the reason for the escape: "He has always professed (so I have understood) the greatest affection for me, & no servant could have been treated with more kindness. . . . Negroes will not bear in their present condition as lenient treatment as Gabriel met with from me, & as a matter of necessity, I shall be obliged to alter my ideas concerning their management & to observe a stricter discipline." His mother replied with a much shorter note four days later from the Blakeley plantation in Jefferson County, where she still resided: "I am happy to inform you Gabriel is here. Please come up without delay." Gabriel had returned to the place he had been born and raised, apparently to see his parents and siblings.
Gabriel was brought back to Mount Vernon, where he was likely subjected to the "stricter discipline" which young John Augustine Washington had promised. Three years later, he once again rebelled against his condition. The next letter in this collection is from Washington's overseer Joseph McFarland, Mount Vernon, 3 August 1845: "I have had a great deal of difficulty with Gabriel & had to put him in jail. Saturday I started him out of town with the corn & bran," and came across him hours later having not made the delivery: "He sayd he had been about his business, spoke very mad. . . . He got on his horses, curseing & fighting them. I told him to stop & he would not, still curseing & swareing. I takes the whip from him, he then jumped of his horse horses & ran. I rode around him & stoped him. He then turned to abuseing me to all purposes. He allowed he would not stay here any longer & a great deal of stuff. The people told me I had better put him in jail. I put him with Mr. Bruen at 25 cts a day. Mr. Bruen thinks he would be mighty apt to run away. I did not flog him as Mr. Bruen persuaded me not, for it would injured the sale of him." Gabriel had been placed in the infamous Bruin's Slave Jail in Alexandria, VA, where Joseph Bruin and Henry P. Hill held large numbers of slaves awaiting sale or discipline. Harriet Beecher Stowe discusses the jail at length in her Key to Uncle Tom's Cabin.
We have heard from the Washingtons and their overseer concerning Gabriel Johnson's behavior. Next is the most remarkable letter in this lot, where we hear from Johnson himself. It is possibly the only extant letter written by a slave from Bruin's jail. It appears to be in the hand of Henry P. Hill, Bruin's business partner, to whom Johnson apparently dictated the letter. Writing to John Augustine Washington on 5 August 1845, he offers his own version of the dispute. Gabriel expresses regret for the incident and affection for the Washington family, but also asserts his perceived rights and pointedly does not offer an apology: "Mr. McFarland & myself had a difficulty on Saturday evening . . . which had so far resulted in my confinement in Mr. Bruin's jail. . . . The thing commenced by his riding up to me & ordering me to get down & caught hold of my whip to strike me & I pulled it out of his hand & jumped off on the opposite side & told him that he could not whip me, as I did not think any person but my master ought to do it, or at least to authorize it. Mr. McFarland took hold of me & ordered me to cross my hands & I pulled loose & run off when him & four or five others pursued & caught me & having tied my hands, he brought me here. . . . I want you, if you please, sir, to come down & see about the matter & hope that you will be satisfied that at least I am not the only one to blame. I love you & your family . . . & would not by any means offend you if I could avoid it. I am very anxious to see you here & feel fully the painful uncertainty of my situation."
We know from other letters sold at Swann (30 March 2017, lot 30) that Bruin and Hill held onto Gabriel Johnson for at least two more weeks, and offered Washington $565 for him, but Johnson returned to Mount Vernon. He helped manage the plantation during the war under Union control, and is listed at Mount Vernon in the 1880 and 1900 censuses. Johnson and his family are discussed at length in "Sarah Johnson's Mount Vernon: The Forgotten History of an American Shrine" by Scott Casper, pages 39, 45, 54, 93-97. 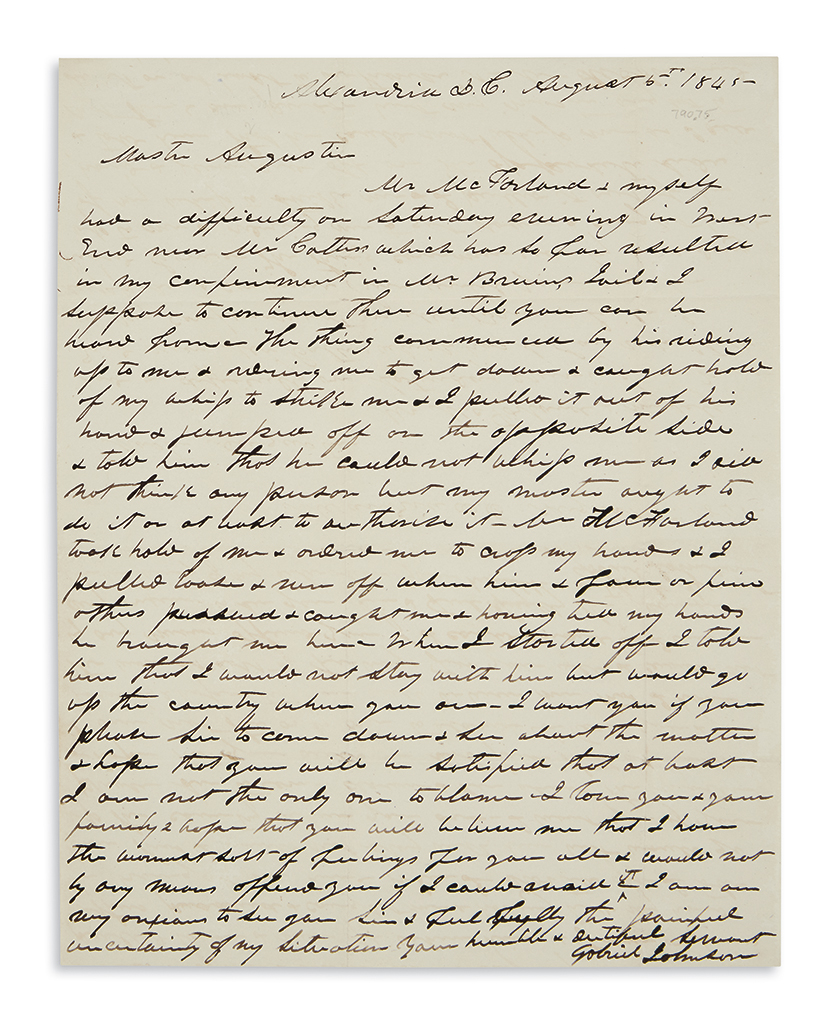