Jacob Rodrigues Rivera (circa 1717-1789) was a Newport merchant, actively engaged in the slave trade. He wrote this letter to his captain Nathaniel Briggs (1737-1801), a veteran of at least 7 other slave voyages by that point, who was then heading to Africa in the ship Three Friends. The first part of the letter was originally written on 13 September: "We hope that when Capt. Duncan arrives on the coast, will find you safe arrived . . . and that in the end, your voyage may in every respect answer to our most sanguine expectations. . . . Capt. Sherman in our brig Betsey, having stopt at Eustatious from the coast, & not meeting a market there for his slaves, had proceeded to So. Carolina . . . & carried 140 very good slaves for cargo, 133 of which . . . were disposed of, & averaged better than £53 ster'g a head. . . . Our brig being already fitted with Guinea stores & can be fitted for the same voyages with little expense, we propose fitting her out for the coast as soon as she arrives with all possible dispatch. By that time, we hope, you'd have left the coast with good success."
The original of this letter had been sent via another slaver, Captain Duncan of the brig Peggy. A month later, Rivera had the opportunity to send another letter by Captain DeWolf of the brig Enterprise, heading out on a slaving expedition himself. Rivera had his first letter copied out, on the odd chance that Duncan had failed to deliver it, and then added a postscript dated 14 October: "The foregoing is copy of our last by Duncan since which Shearman has brought the brig Betsey home, but as we have found it was impossible to get her away for Africa before Dec'r we have concluded to let her lay untill early next spring, when please God we then shall dispatch her for Africa. . . . Dan. Gardner is arrived at Charleston, sold his slaves there at £58.10 st'g on an average. . . . The best slave for Carolina market is those from 16 to 25 years old." Between the two portions of the letter, at least 6 different slave voyages are referenced--most of the Rhode Island slavers who were out to Africa at that time. It gives a disturbing sense of the magnitude of the trade at its peak--these ships were heading to Africa regularly, saw each other frequently en route, and swapped trading advice to further increase their business.
The 13 September first portion of this letter is already fairly well-known, as the original (delivered by Captain Duncan) is held by Yale University. See the Yale University Library Gazette, July 1939, page 14. The ship Three Friends left Newport, RI in August 1785, collected 192 slaves in Africa, and disembarked 169 of them in St. Thomas and other American ports before returning to Rhode Island in May 1786. See the Trans-Atlantic Slave Trade Database, and Coughtry, The Notorious Triangle, page 262. 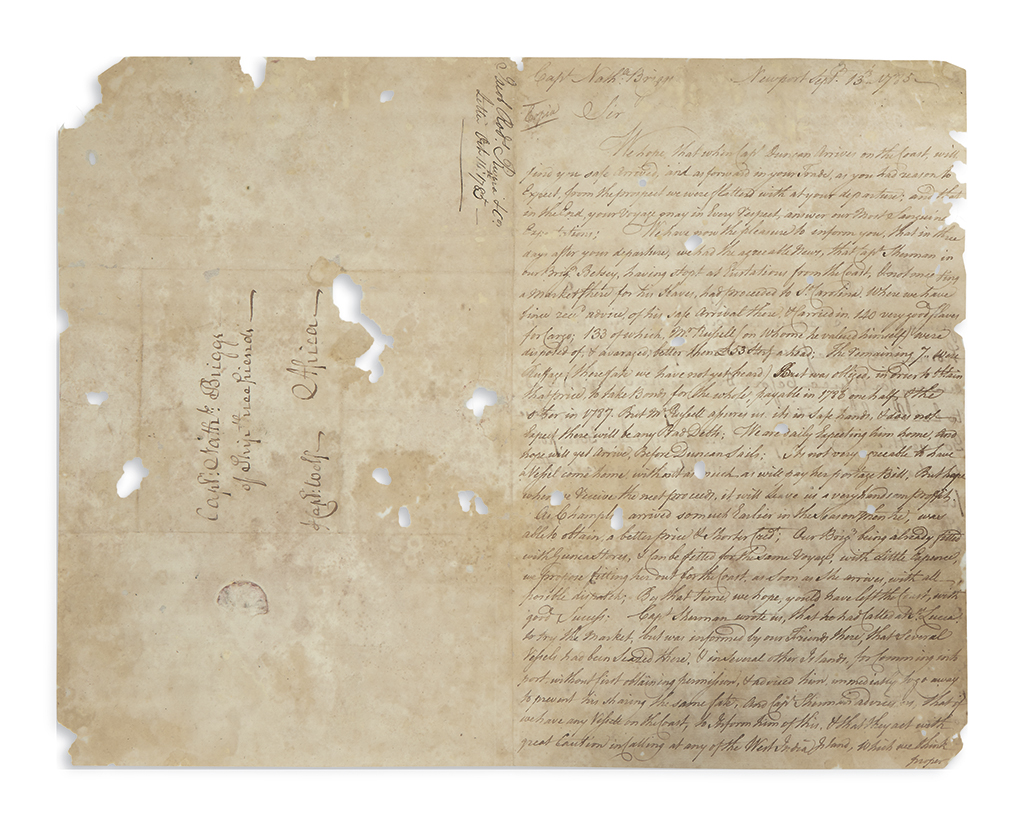